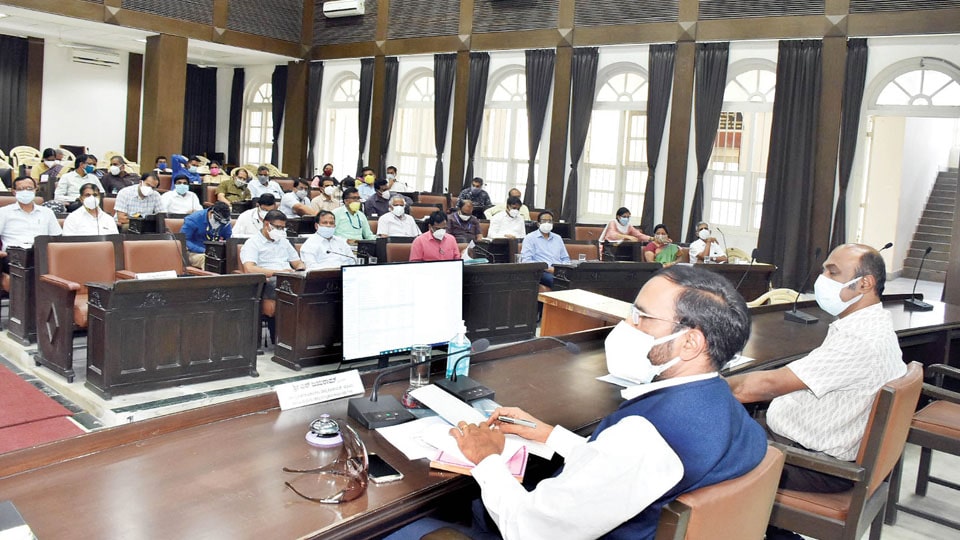 9,515 children in Mysuru suffer from malnourishment

Anganwadi workers on full-time COVID duty; no time to take care of children

Deputy Director for Women and Child Development K. Padma brought the issue to the notice during the meeting that 132 children in the district had been identified as suffering from Severe Acute Malnutrition. Of the 9,515 children, 1,500 are from H.D. Kote taluk that is predominantly a tribal area full of forests and tribal hamlets.

Eight tribal children are suffering from Severe Acute Malnutrition and 10 have severe forms of other diseases, the officer told the meeting. Taking exception to this, Jayaram questioned the officers where does the free nutritious food supplied to the children by the Government go. “Every month, eight kgs of rice, one kg sugar, two litres of oil, 500 grams ghee and pulses are supplied to each family. Aren’t they reaching the tribals?” he questioned.

He suggested measures to control malnutrition and directed the officials concerned to keep a close watch on the children suffering from Severe Acute Malnutrition. He also asked them to monitor whether the Government-supplied rations are reaching shops instead of homes. There have been complaints in the past that items like ghee and pulses are sold to shops for money to buy alcohol.

Interestingly, last year Mysuru city had recorded a fall in its number of malnourished children. According to data from the Mysuru Urban Childhood Development Programme Office, in February, the city saw 13 children being malnourished, which is a significant drop from 22 children suffering from malnutrition as of July 2018.

Malnutrition cases have come to light despite health schemes like ‘Suposhit Maa Abhiyan’ being launched in a bid to create a malnutrition-free country. Officials on condition of anonymity admitted that the COVID lockdown has interrupted crucial Government schemes that benefit thousands of women and children.

Also, Anganwadi workers, who were deployed in large numbers to monitor COVID and create awareness on how to prevent it, are yet to fully return to their original jobs. So Anganwadis in remote areas are not fully functional yet and there is no provision to depute other workers there, said officials.

This has severely compromised the administration’s ability to track the status of malnourished children who have been pushed further at risk due to COVID-19. Most tribal women are anaemic and poor. And since undernourished mothers give birth to undernourished babies, experts say the worsening rate of malnutrition could be a result of women struggling to access nutrition benefits.