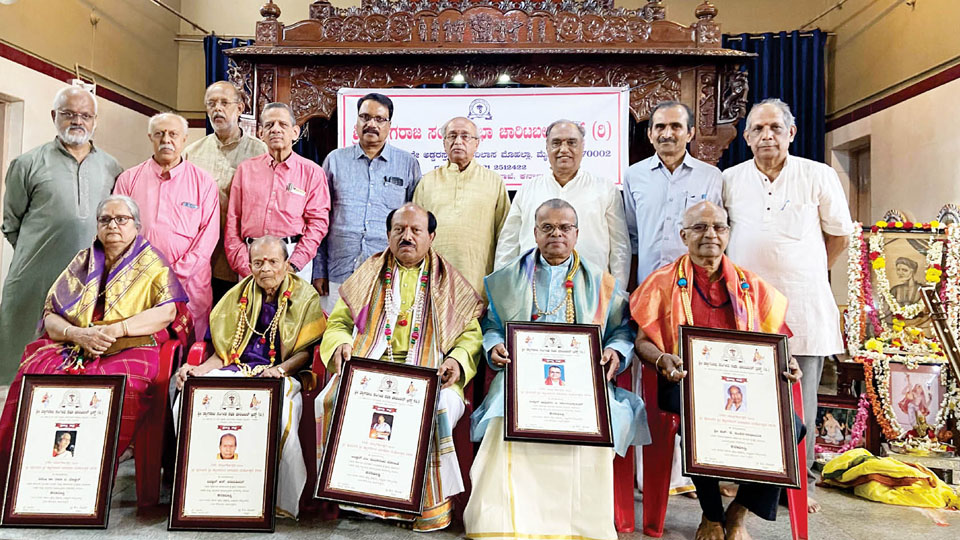 A Day of Fulfilment

Tyagaraja Aradhana is held every year on the anniversary of the day the great saint achieved Samadhi in 1847, that is, on the Pushya Bahula Panchami day. Bangalore Nagarathnamma, an ardent devotee of Tyagaraja, considering that she owed her considerable wealth to the grace of Tyagaraja, dedicated her life’s earnings to preserving Tyagaraja’s legacy and perpetuating his memory. She constructed the temple at Thiruvayyaru and the consecration of the temple took place in 1926. And since 1941, the convention of singing Tyagaraja Pancharatna, selected by Harikeshanellur Muttiah Bhagavatar as being best suited for group singing, is performed year after year in memory of the great saint.

The Aradhana is held not only in various parts of the country but also in Cleveland, Mauritius and Nigeria. At Mysuru too the major music sabhas observe  Tyagaraja Aradhana with music concerts and Pancharatna singing. Tyagaraja Sangeeta Sabha, one of the reputed music sabhas, is known for its dedicated service to music. While it organises monthly concerts only for the upcoming Kannadigas, it also honours senior musicians and music promoters on the occasion of Aradhana. The day begins with ‘Uncha vritti’ at  8 am. City’s well-known musician R.S. Nandakumar is ready in Tyagaraja’s costume and hundreds of musicians in the leadership of Koviladi Kala, senior musician of the city, join him in the chorus of group kritis of Tyagaraja. Sumptuous breakfast is served for all after which the sabha programme begins.

This year the Sabha observed its 33rd anniversary on the 9th February, before which a week-long concerts were held every evening at various locations of the city. The morning programme started with ‘Ranga Geetegalu’ by the 90-year-old Paramashivan, who was one of the felicitators this year. He has a blessed voice made for singing these songs. He entertained the listeners with songs from ‘Tilottame’ and ‘Rama Nataka’. How the previous stagemen adapted the classical kritis for their songs substituting the lyrics was explained and sung. ‘Durmarga charadhamulanu’   in Ranjani and ‘Aparadhamula’ in Latangi were sung energetically replacing the lyrics with those suited for the play, which was extremely well-received. This was followed by the felicitations. Five eminent personalities of music were felicitated — Madhur V. Balsubramanyam (vocal), R. Paramashivan (music and stage songs), Rama Bennur (music reviews), Dayananda Mohite (percussion) and H.K. Shankara Narayana (art promotion). Prof. N. Narayana Shastri and industrialist G. Harish presided. On behalf of the felicitators, Rama Bennur spoke and appreciating the Sabha for the team work, observed that Tyagaraja Sangeeta Sabha is the only Sabha in Mysuru to observe ‘Deekshitar Day.’

READ ALSO  In synchronisation with bhava

The felicitation was followed by ‘Goshti Gayana’ by the senior and young artistes of the city. More than 200 people participated with enthusiasm and dedication in the singing. The Pancharatnas of Tyagaraja- ‘Jagadananda Karaka’ in Nata, ‘Duduku Gala’ in Gowla, ‘Sadhinchane’ in Arabhi, ‘Kanakana Ruchira’ in Varali and the very popular ‘Endaro Mahanubhavulu’ in Sri Raga were presented by all with devotion. Led by HKN, R.N. Srilata and Sukanya Prabhakar, more than 50 instrumentalists participated too. A smile of fulfillment was seen in all present on the occasion.