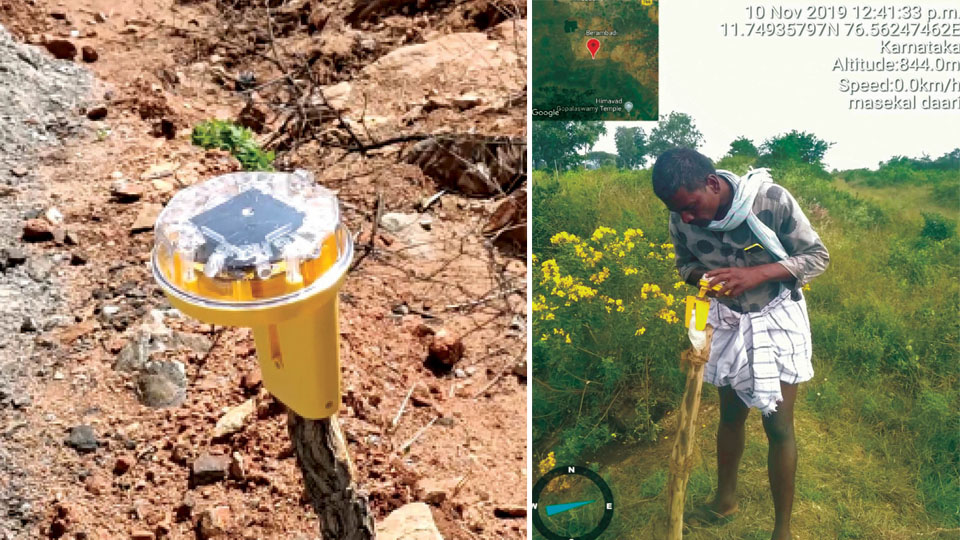 A foxy idea inside the woods…: Fox Lights to prevent wild animals from entering human habitat

Mysuru: In a bid to control man-animal conflicts as a result of wild animals straying into human habitat, the Forest Department has installed Fox Lights on an experimental basis in border areas  as being done in various countries.

The menace of wild elephants, tigers, leopards and bears in villages bordering Bandipur Tiger Reserve has posed a challenge to the Forest Department. Though installation of railway track barricades, solar fences and elephant trenches saw success in a few places, it has failed miserably at most forest fringes.

In this backdrop, an Australian company has come forward to install colourful Fox Lights on the fringes of forests that would keep wild animals at bay. In Australia, farmers protect their crops and livestock from predation through these Fox Lights. There, the European Red Fox is a menace that targets small mammal population and prey on newborn lambs.

To prevent this menace, Fox Lights have been developed to produce light at random intervals to emulate a moving person carrying a flashlight (torch). Each Fox Light contains LED bulbs. The lights flash in varying blue, red and white sequences at 360 degrees and can be seen from about a distance of 1.5 kms.

Balachandra was informed that Fox Lights were successful in preventing foxes and other wild animals from entering human habitation. Now a couple of Fox Lights have been installed on an experimental basis at Gopalaswamy Betta range of Bandipur in a small way and there are no cost implications for the Department.

Solar-powered light sensors turn the light on automatically at dusk and off at dawn so that they do not need to be revisited daily and each Fox Light costs between Rs.10,000 and Rs.15,000.

What is a Fox Light?

Fox Light is a predator-deterrent with a computerised flashing light that gives the impression of someone patrolling a particular area during dark hours. More than one light may be required to be sure to have coverage from all sides. If the wild animal cannot see the light from a distance, then it won’t be effective. Although originally designed to help protect livestock from predators, Fox Lights are also used in village borders to prevent wild animals from entering human areas.

Each Fox Light consists of LED bulbs installed inside a circular device which emits red, blue and white light one after the other through solar power. A Fox Light is installed with a clamp on wooden pole which is six feet above the ground so that it is visible. Wild animals generally avoid entering an area that is lit up.

Certain villages in Kodagu still have fire places near houses where fire is lit to prevent elephants from venturing near humans. Usually wet wood is placed on top of dry wood and the fire is lit as night falls. This wet wood prevents fire from burning down the wood quickly. Bellowing smoke from the fire place and the fire per se acts as a deterrent till sunrise.

Balachandra said that the efficacy of Fox Lights will be studied for 3 to 4 months before conducting an in-depth study of the new system.

READ ALSO  Akshay Kumar’s episode of Bear Grylls’ Into the Wild to première on Sept. 11

“Fox Light was basically designed to keep away foxes and is yet to be tested on elephants or other wild animals that foray into human habitat in our country. We have done this on an experimental basis at Gopalaswamy Hill and Omkar Range. Once we get positive results, we can think of installing the lights in other border areas,” he said.

“Fox Lights blink 360 degrees by emitting colourful lights, making animals believe that there are human beings in that area. At present, Fox Lights have been installed near Anjaneyaswamy Temple and Bandikaadu. According to the Australian company, wild animals will not venture near the lights and will stay one kilometre away from the light. We are observing the functioning of the lights and examining their efficiency,” said Naveen Kumar, Range Forest Officer, Gopalaswamy Hill Range.

Following the advice by Australian Fox Light company’s Eli, six lights have been installed and after observing the pros and cons of the lights, future action would be taken, said T. Balachandra, Director, Bandipur Project Tiger.

The Fox Light blinks 360 degrees by emitting colourful lights making animals believe the presence of human beings, according to Fox Light manufacturing company. At present, Fox Lights have been installed near Anjaneyaswamy Temple and Bandikaadu. Wild animals will remain at a distance of one kilometre from the light, the company has stated and wild animals have not ventured near the lights so far, but we received information that wild animals were venturing at places where the Fox Light cannot be seen and we are observing it carefully, says Naveen Kumar, Range Forest Officer (RFO), Gopalaswamy Hill Range.