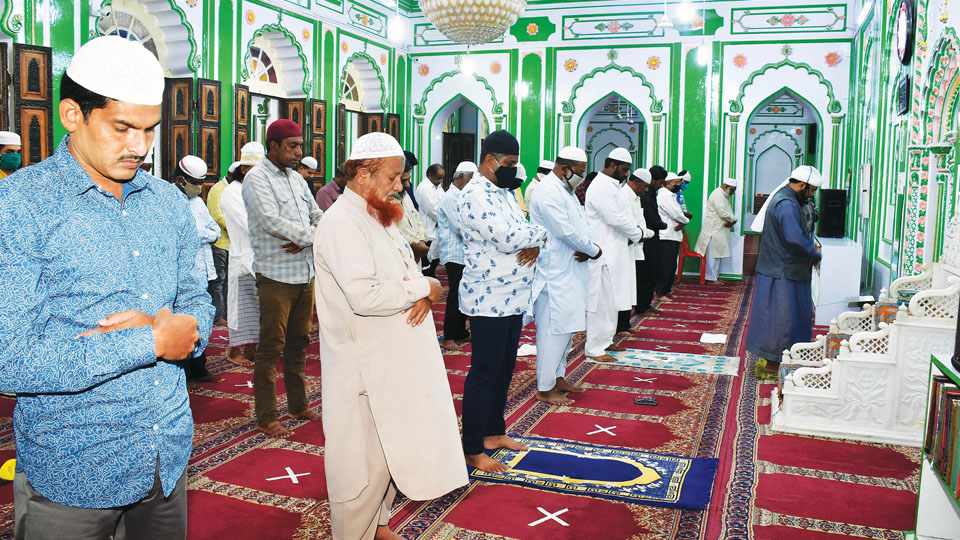 A low-key Bakrid in city amid COVID-19 pandemic

Mysore/Mysuru: The Muslim brethren in city today celebrated Bakrid amid the COVID-19 pandemic, adhering to the strict health protocols laid down by the Government. The community members offered prayers at Masjids and at their homes.

The District Administration has allowed prayers only in mosques, that too with a maximum of 50 people at a time. Mass prayers at Eidgah and other places were prohibited. Muslim brethren in limited numbers offered Namaz at all Masjids in the city by wearing face masks and maintaining social distancing. Temperature of people entering Masjids was also checked with thermometer gun, as a precautionary measure.

Children aged below 10 years and persons aged over 60 years were not allowed entry in keeping with the guidelines. While some Masjids held Namaz for attendees in two batches, others in a single batch. The prayers began at 6.30 am, with Muslim brethren offering Namaz.

Namaz was held at all Mosques in the city including Masjid-E-Azam on Ashoka Road, Yallah Masjid opposite the Northern Gate of Government Guest House on Mysuru-Bengaluru Road, Masjid near Fountain Circle on Bengaluru Road, Quba Masjid in Udayagiri, Quasim Masjid in Muneshwaranagar, Zakaria Masjid in Rajivnagar, Yaseen Masjid near Narayana Multi-Speciality Hospital on Ring Road, Bilal Masjid in Udayagiri an Bharatnagar Masjid. All the community members were required to bring their own prayer mats.

The Muslim brethren celebrated the day with enthusiasm, exchanging greetings from a distance and distributing sweets and gifts in their neighbourhood. They donned new clothes and offered prayers.

“We have ensured all arrangements here. In fact, we have ensured a safe environment in several big and small mosques on this occasion. Namaz was offered at 6:05 am,” said a Moulvi in Rajivnagar.

“I feel really good to be here on Bakrid. Everyone followed lockdown norms and Muslims had earlier offered Namaz at their homes, they followed all the rules and regulations,” a community member said in Udayagiri.