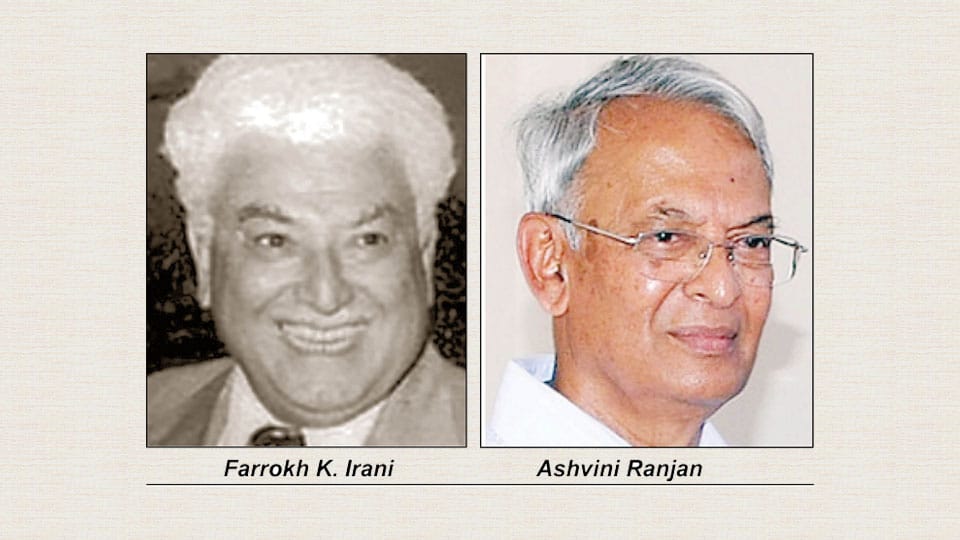 Farrokh Khudamurad Irani, Farrokh K. Irani (or F.K. Irani) for we Mysureans, Founder of the famous Ideal Jawa Motorcycle Factory at Yadavagiri, Mysuru, was an iconic Mysurean of his days since 1960. He passed away in October 1985 but happily there are Mysureans who revere his memory. I discovered the proof of this sentiment when Farrokh’s grandson (son of Farrokh’s eldest son Raian Irani) Yazad Raian Irani got the highest number of votes (182 out of 197 valid votes) in the membership election to the Mysore Race Club (MRC) held on 31.3.2021. I was delighted that the MRC members have not forgotten Farrokh’s contribution to the very existence, rather the survival, of MRC and voted his grandson with the highest number of votes ever in MRC membership election history.

Though MRC owes its origin to the then King  Chamaraja Wadiyar who started it in the year 1891 (130 years old as on 2021), after Independence of our country, the MRC was saved primarily due to the initiative taken by Farrokh Irani, who was in close friendly relationship with the last King of Mysore, Sri Jayachamaraja Wadiyar. It was, therefore, not surprising Farrokh K. Irani was the Chairman and Sr. Steward of MRC continuously for 14 years.

The grateful members indeed remembered his services by voting his grandson overwhelmingly for the membership of MRC that he had nurtured for 14 years and left a racing legacy for this beautiful royal city.

Be that as it may, in the midst of MRC election canvassing, Raian Irani’s wife Jyotsna happened to lay her hand on an Abracadabra I wrote on 5.10.1978 (eight months after Star of Mysore began its publication) about Farrokh Irani and forwarded it to me. Apparently from the family’s press clippings about their patriarch Farrokh. Those days no headline was given to this column which was merely known as ‘Abracadabra’ and signed by me as PUCK — a Shakespearean character. Since it is quite nostalgic for our readers of those early days, let me reproduce it here:

If ever Mysore were to have a Sheriff like in Bombay, I would like to have Mr. Farrokh Irani as the Sheriff of Mysore. I have not met Mr. Irani nor did I have occasion to talk with him. But from what I have seen of him on the stage in innumerable social functions and from what he said on these occasions, I can presume that he will make an excellent Sheriff. I would love to have him as our Mayor, but then you know what.

Mr. Irani carries silver mane on his head, lots of money in his pocket (I mean bank) and plenty  of love in his heart. He has a sense of humour in a world where there is very little to smile, though there is much to laugh at. I do not know if he is big enough to take a joke on himself.

I learn sometimes his light-hearted humour smacks of malice. I recall how one of his sarcastic statements wrapped in his brand of humour sparked of a controversy in the Rotary Club involving Mr. Ashvini Ranjan, an independent spirited young man. In this case, unfortunately, a rich man’s joke did not turn out to be humorous as happens always.

Anyway, with a well-meaning, charitably disposed, gentle person like Mr. Irani these incidents are well taken in good humour. Poor Mr. Irani is a bundle of ‘Yes’ even when he is slightly disabled with some leg  ailment. He appears to be unable to say ‘No’ to anyone. He must be a great soul. Otherwise there is no reason why he should torture himself attending so many functions with that limp. It is indeed touching how Mr. Irani has endeared himself to Mysoreans. Many rich men are here. But alas there is only one Irani. — PUCK

Since my friend Ashvini   Ranjan’s name appeared in that Abracadabra, I forwarded it to him for his reading pleasure in these leisurely days of COVID-19 !

And here is what he wrote to me:

Your Abracadabra dated 1978 brought back memories.  Surprised that you have retained them even after forty years.  Not easy to preserve physical copies.

I recall vividly that evening during a closed door Rotary meeting, when I took objection to the light-hearted manner Mr. Irani (Farrokh to all fellow Rotarians) had inducted  Mr. Nanaiah, a good friend of mine, as member of Rotary Club. Being a shy natured person, Nanaiah was visibly embarrassed. (He later told me that he wanted to run away from the stage).

My objection was that as per the Rotary manual, an induction ceremony is a solemn one and the member being inducted was required to feel comfortable and welcome by the inducting officer.

As you rightly observed, a rich man’s jokes are always funny and there was no dearth for members indebted to Mr. Irani who applauded the joke.  My raising objection took Mr. Irani and many of his friends by surprise. It appeared that I had committed sacrilege. My response was drowned in the din that followed.

There are many who are still members of the club and who can recall that event.  The man who complimented me on my bold stand was none other than your brother Dr. K.B. Subbaiah. (We sat together during the meetings). I resigned from the club in protest.

It was some six months later, that I received a phone call from Mr. Kaiser, my father’s friend,  neighbour and the then Municipal Commissioner.  He said that Mr. Irani wanted to meet me. I was no doubt immensely surprised.  We met at Mr. Kaiser’s residence over a drink.  He expressed regret for what happened that evening at the Rotary Club and extended his hand in a firm handshake.

READ ALSO  The misery of losing and the miracle of finding ! -2

It would not have mattered to him even if he had not expressed regret. I was a small fry compared to him. But wanting to meet me, even after a lapse of time, suggests that the incident must have bothered him and tugged his conscience. By that little gesture, Farrokh’s stature rose in my esteem. Surely it must have occurred to him that he must be wary of cheer leaders and ‘Yea Sayers’ of the world.

That incident did not dent our friendship.  He was certainly a noble man and Mysore would have benefited immensely had he become its Mayor !

Tailpiece: My family members and close friends fondly call me Gandhi, my pet name. As we know, it is so with everyone all over the world. Since it was a personal and private communication as a friend, Ashvini has used my pet name. Back in my village, I am known only as Gandhi, son of Bopaiah master. This Ganapathy is nobody for them.

3 COMMENTS ON THIS POST To “A Noble Man: Remembering Farrokh K. Irani again”