Home » Columns » A sad exhibit of our incompetence ! 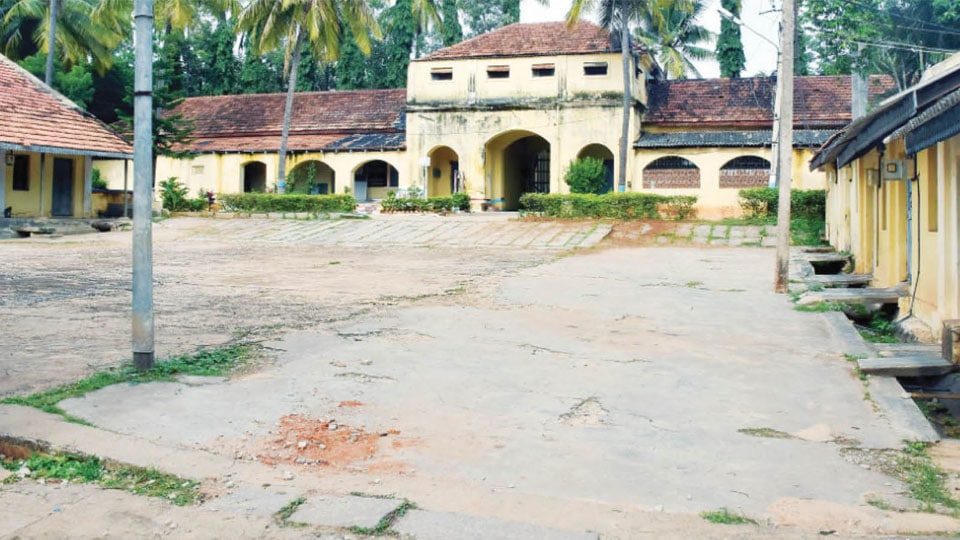 A sad exhibit of our incompetence !

In my present series of articles about the neglected heritage structures of our city, our more than a hundred-and-ten-year-old Fire Brigade Building at Saraswathipuram also deserves a mention.  Although the front portion of it collapsed way back in the year 2019, due to the ravages of age, rain and neglect, it has been left in a limbo without the damage having been repaired over the two full years that have gone by. It is not that the rest of the building is unworthy of being preserved or restored like the Lansdowne building, because it is still very much in use by our firefighting department.

Very interestingly, if you look at its now exposed interiors you will notice that in some places, it is built with a unique kind of hollow bricks, not unlike the modern hollow block cement ones that are in use now! Not many Mysureans may know this but this was the place where our Dasara Exhibition was held every year, since it was first inaugurated there on 5th October, 1907.

Though it was initially held in the open area, now known as the Oval Grounds between the DC Office building and the Oriental Institute ever since it was inaugurated on the 16th October, 1888 as an Agricultural and Industrial exhibition, it was later shifted to the present Fire Brigade Building which was built specially to conduct it, after it became an annual event associated with our Dasara.

This was done by the then Maharaja Chamarajendra Wadiyar, after the show was much praised by the Prince and Princess of Wales (later known as King George V and Queen Mary) during their visit to the State in February 1906. That is why we still find that behind its built-up front façade the Fire Brigade building has a huge open ground where the firemen now hold their training sessions and daily parades.

Since my wife’s family stayed for many years in a house immediately next to this place, it appears her two older brothers Shakeel Ghori and Shafeeq Ghori used to play volleyball there every evening, along with the firemen. Sadly, Shafeeq is gone from our midst because as a Major serving in the Indian Army, he was martyred in a fierce encounter with militants in Kashmir in the year 2001.

The ground next to the Mysore Medical College which was then known as the Horse Grounds, became the venue of the Dasara Exhibition in the year 1927 when it was resumed after an austerity break of eight years after the First World War. Its imposing façade that now houses the library of the Mysore Medical College along with some of its other departments, was built in the year 1936.

READ ALSO  The times when the sky fell on me!

It is interesting to note that the Mysore Akashvani Radio Station functioned from this building for some time before being shifted to its present location in its own building at Yadavagiri. The nearby J.K. Grounds which was actually a marshy tank, was drained to make it the venue of the industrial part of the exhibition. All through the years, while the show went on here, the open space in front of the Paediatrics Block of the Cheluvamba Hospital across the road, served as the parking area for the vehicles of all those who visited the exhibition. And, because this small patch was more than adequate to serve this purpose you can gauge how many vehicles our city must have had then!

It was also while the show was held here that it was very dear to me because as a kid, I would be waiting with bated breath for it to start every year. It held much attraction for me mainly because of the couple of air-gun shooting stalls that it used to always have. For ten paise a shot, anyone could give it a try and burst the colourful balloons pasted on the backdrop. And, for a full rupee you could shoot down as many as you could, till you missed a shot.

The second option was what I would always opt for because I was particularly good with an air gun, having had my own at home since the time my gun was taller than me!

My shooting performance would be so impressive that it would soon gather a crowd of cheering spectators who would be amazed at the prowess of a small kid with a gun! Because it was very close-range shooting, I would invariably keep shooting without missing till the stall keeper himself would request me to be a little kind and refrain from ruining all his balloons and bullets! So, my visits to the exhibition were always a good chance for me to show off before a crowd and feel on top of the world!

In the year 1977, when a portion of the Doddakere Maidan was converted into the present Dasara Exhibition Grounds, the show has been going on there although only as feeble shadow of what it was in the past. Sadly, although we now have a top-heavy exhibition authority, comprising many favoured and influential heavy-weights, we see that the show really starts only after the nine-day Dasara that lends its name to it, is well over. And even then all the stalls are never operational despite the exhibition getting two or three extensions beyond its originally stipulated life span of thirty days!

Going back to our Fire Brigade building, I think that all Mysureans will agree with me that its collapsed portion needs to be repaired without wasting any more time. It is a very small job that does not involve much cost for our State Government which otherwise thinks nothing of wasting huge sums of money on needless projects that do no good to us. The disfiguring blemish, right on its face, should not be allowed to mar the beauty and dignity of this beautiful edifice with a rich history, that stands with its once beautiful face covered in a prominent and beautiful place.

If the Government has no will to spend money and effort on this tiny good deed, I am sure that many of our philanthropic citizens’ groups would be more than willing to do it if given a chance! Any takers willing to step forward uninvited?

3 COMMENTS ON THIS POST To “A sad exhibit of our incompetence !”