Home » Columns » Abracadabra By K. B. Ganapathy » A tourist’s view of Kashmir: Heaven on earth…! —1 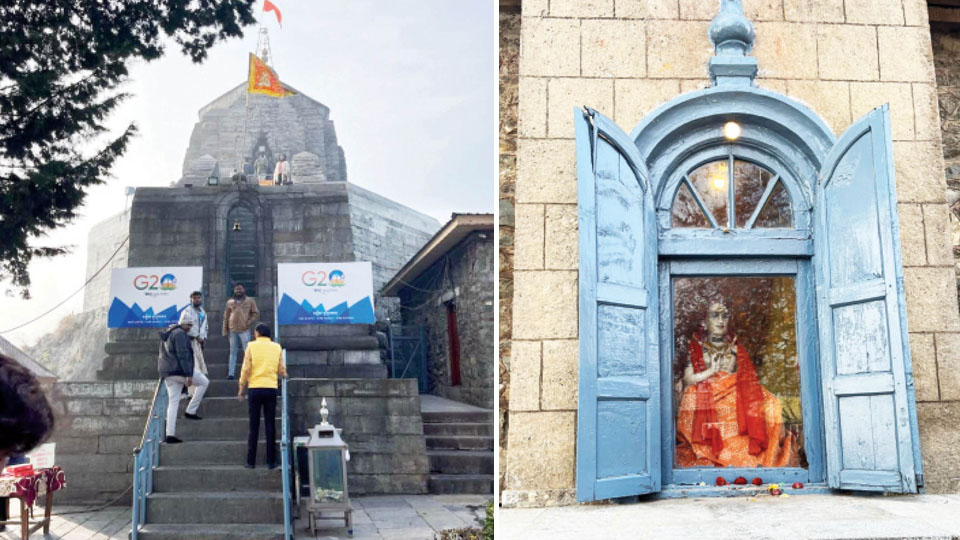 A tourist’s view of Kashmir: Heaven on earth…! —1

Om Namah Shivaya’ be the invocation because according to a book by N.K. Singh titled ‘Saivism in Kashmir’ the first religion of Kashmir was Saivism — worship of Shiva. I purchased the book at the Srinagar (capital of Kashmir) Airport on my return journey from Kashmir after a week’s sojourn, on 3rd December, last Saturday. Kashmir enjoyed high reputation as the centre of Saivism from the earliest times, till the Muslim invasion in the 14th century.

In the Vedas, Shiva is known as Pasupati. In the Veda, Pati was the Lord. Pasu was Cattle. So Lord of Cattle. No wonder Nandi is Shiva’s vehicle. In the Vedas, He had the power of protecting cattle. The older Shaiva doctrine was said to be Dualism (Dvaita) and Shiva considered omnipresent and omnipotent.

The greatest saint-poetess of Kashmir (1335-1358 AD) is said to be Lalleshwari, also known as Lal Ded. She composed short, crisp sayings (Vaakh) that were very popular among the lay people. When she was treated cruelly by her in-laws’ house, she came out and wandered the country singing and dancing in half-nude or in nude. A reminder of our own saint-poetess Akka Mahadevi of 12th century (1130-1160 AD). Both were devotees of Shiva.

Be that as it may, Lalla illustrates her teaching of the essential unity of all things with the supreme by the analogy of ice, snow and water, which are three different things, but on reflection we see that they are not different. When the sun shines, the three will become one.

She then explains, similarly when the sun of true knowledge dawns on you, you recognise that all the three — ice, snow and water — are part of the one supreme, so also that the whole universe is one. I wondered, ‘why not all our religious heads and followers of different religions understand this simple truth and live in peace tolerating each others religion?’

Emperor Ashoka was a Shaivite, later became a Buddhist and spread it in Kashmir, so also his son, before Christian era.

It was only during 13th century, Muslim rulers could occupy Kashmir which till then was under Hindu kings. As could be expected, thereafter this led to the eventual decline of Kashmir Shaivism in Kashmir and Islamisation in Kashmir began. In 1339, Shah Mir became the first Muslim ruler of Kashmir. Then Mughals and Afghan Durranis ruled. And then Sikhs under Ranjit Singh annexed Kashmir.

In 1846 after the Sikh defeat in the First Anglo-Sikh War, the Raja of Jammu, Gulab Singh became the new ruler of Kashmir, under British paramountcy.

This lasted till 1947 and the rest is now history known  to Indians, Pakistanis and Kashmiris too.

Earlier, on 24.11.2022 I had written about a brave-heart of 8th century Kashmir King Lalitaditya Muktapida who did not allow the Muslim invader, who had conquered Sindh, to invade Kashmir. Lalitaditya belonged to the Karkota dynasty of which a mention was made in Mahabharata. He built the famous Martand (Sun) temple dedicated to Surya. It is said to be one of the largest temple complexes on the Indian continent but seems to be in Pakistan (its ruins) as no tourist literature or guide or agents mention of it. Yes, they do mention of Sri Shankaracharya temple now in PoK.

However, we saw two temples — one a Shiva temple atop a hillock with steep steps in Gulmarg (see pix) about 56 kms from Srinagar. Needless to say it was small, an apology for a Hindu temple we are used to seeing. It was restored recently by the defence personnel, according to the locals.

Another temple was Shankaracharya temple at Srinagar, a short distance by taxi, where one has to climb about 250 steep steps (see pix).

Shankaracharya temple or Jyshteswara Temple is a Hindu temple situated on top of the Shankaracharya Hill on the Zabarwan Range in Srinagar. It is dedicated to Lord Shiva. The temple overlooks the city of Srinagar. Temple and adjacent land is a monument of national importance, centrally protected under the Archaeological Survey of India. Dharmarth Trust has managed the temple since the 19th century.

The structure is considered as the oldest temple in Kashmir, historically. The mountain is called ‘Gopadri’ or ‘Gopa Hill’. King Gopaditya granted the land at the foot of the hill to the Brahmins that had come from the ‘Aryadesa.’ King Gopaditya built the temple on the top of the hills a shrine to Jyesthesavara (Shiva Jyestharudra) around 371 BCE. Hindus strongly believe the temple was visited by Adi Shankara (8th century CE) and has eversince been associated with him. This is how the temple and hill got the current name Shankaracharya.

In April 1961, Shankaracharya of Dwarkapeetham put the statue of Adi Shankara at Shankaracharya temple. Shankaracharya temple is the oldest Hindu temple of Kashmir. Regular puja was started at the temple during the rule of Dogra Kings after a Blackstone Shiv Linga was installed in the temple’s sanctum sanctorum replacing the ancient Linga lying in broken state. There are around 240 steps to reach the presiding deity leading to the temple and was constructed in 1976 by Dr. Karan Singh, Chairman Trustee of Dharmarth Trust. Temple is managed by Dharmarth Trust which was founded by Maharaja Gulab Singh in 1846 as an endowment for religious charity, and to manage and support Hinduism.

According to the guide, April, May, June are very comfortable months to enjoy various activities, including golf, in Kashmir as there will be no snow and weather temperate. In August, September one could see apple harvesting. However, those who want to see ice and snow or rain, experience the biting cold, time starts from November. Yes, it was November end, biting cold that would numb your old body unless well wrapped with thermal and woollen clothes.