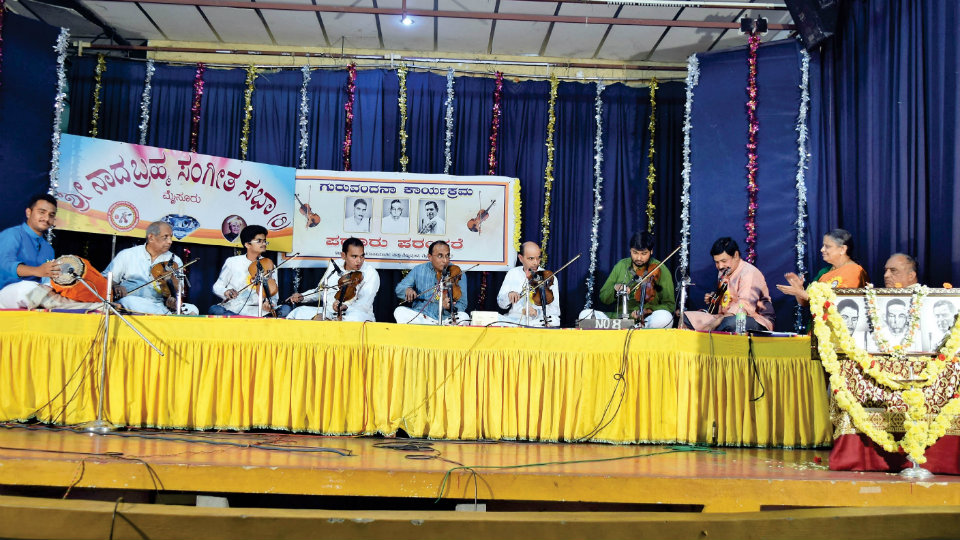 A tribute to three Gurus

Sri Nadabrahma Sangeetha Sabha, in collaboration with Tyagaraja Sangeetha Sabha, had organised a whole-day violin event at its venue on Feb.13. The event was designed by senior violinist of the city H.K. Narasimha Murthy (HKN), his wife Rajalakshmi and their son H.N. Bhaskar.

Nearly a hundred students of HKN participated in this event and it was great to watch their devotion towards their guru. The event was a tribute to three Gurus of the Parur School — Parur Sundaram Iyer, Parur Gopalakrishnan and Parur Anantaraman.

The hall was packed with connoisseurs and parents of the kids who were bubbling with ebullience and excitement.

The day started with the beginners, who rendered three Adi Tala varnas in Mohana, Hamsadhwani and Abhogi. Ranjan Kashyap provided the mridanga support for them. Quite a few compositions followed by the second set of students. ‘Shri Gananatham’ in Eesha Manohari by Muthuswami Dikshitar, ‘Shree Guruguha Tarayashumam’ in Devakriya, ‘Koniyade’ in Kokiladhwani by Tyagaraja and ‘Palukavademira’ in Poornachandrike also by Tyagaraja.

The next set of students played ‘Chalamela varna’ in Darbar by Veena Kuppaiyer, ‘Pahi maam Shree Raja Rajeshwari’ by Maha Vaidyatha Iyer, and ‘Tanavedani’ in Bhushavali by Tyagaraja.

The fifth group started their concert with ‘Chalamela’ varna in Natikuranji, ‘Kannatandri Naa Pai’ by Tyagaraja, Eesha Pahi maam’ in Kalyani, a Lalgudi Pancharatna kriti by Tyagaraja, the pallavi of which was suffixed with kalpana swaras and Kharaharapriya handled in detail by Chintan. Sai Shiv Lakshmi Keshav provided the mridanga support.

The post-lunch session showcased more senior artistes who presented ‘Ninnukori’ varna in Vasanta, ‘Raghunayaka’ in Hamsadhwani by Tyagaraja, prefixed by a couple of rounds of Kalpanaswaras, ‘Anathudanu neevu’ also by Tyagaraja in Jingla and Vachaspati in detail with the Tyagaraja Kriti — ‘Kantha Judumi Okkapari Kri’ set to Adi Tala.

Tandava Murthy, Shanta Kumar, Keshav, Kritik and Bhuvan, a young talented boy played ‘Sarasuda’ in Saveri, ‘Shree Rama Ramanam’ in Mohana by Pallavi Gopala Iyer, which was prefixed by a short Alapana by little Bhuvan and Shreekantimataim’ in Hemavati by Deekshitar. They were accompanied by G.S. Ramanujam on mrdanga and V.S. Ramesh on morching.

The evening was interesting with a fusion directed by Bhaskar, in which more than 35 students participated. It was a pleasure to watch so many students perform with such synchronisation. They presented three compositions — ‘Inspiration’, ‘dimensions’ and ‘Raghupati Raghava Rajaram.’

The evening concluded with a short duet concert by HKN and Bhaskar, who played ‘Manavyala Kinchara Date’ in Nalinakanti by Tyagaraja. Crisp and aesthetic swaras to the pallavi were pleasing. Sindhhubhairavi by Bhaskar was excellent with beautiful sangatis. The concert closed with Purandara Dasa’s ‘Tamboori Meetidava’.

HKN is blessed with a wife who is equally devoted to music and teaching. The couple’s enthusiasm on stage throughout the day was praiseful and idolising. The Guru, highlighting the talent of the students and allowing them more to perform than performing himself was the motive, which is laudable.