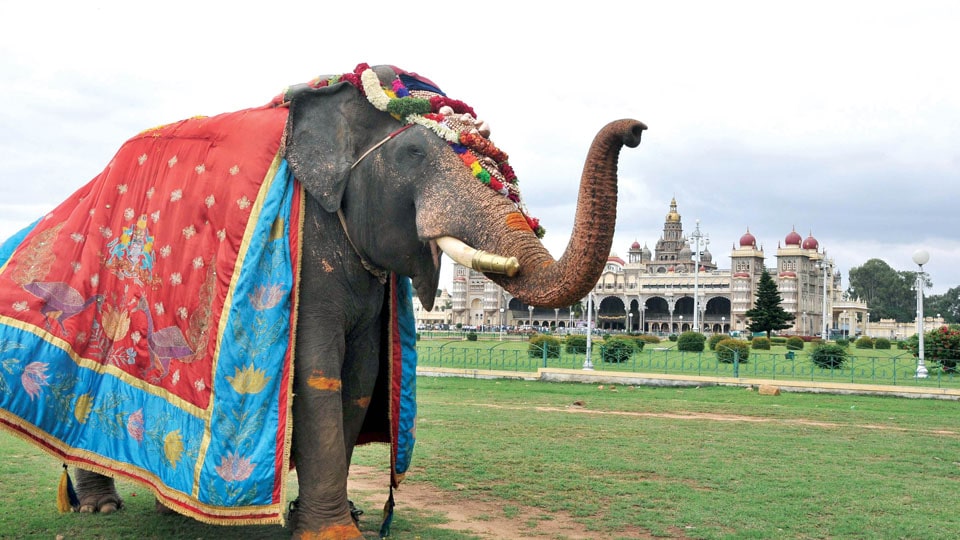 Mysore/Mysuru: The 55-year-old Abhimanyu, one of the longest serving members of the elite Dasara jumbo squad, will carry the 750-kg Golden Howdah that has the idol of Goddess Chamundeshwari this year too in the Jumboo Savari.

The veteran elephant had successfully taken over the mantle from Arjuna last year after the latter’s retirement and accomplished his weighty role with ease and majesty. This year, the festival will begin from Oct. 7 and will culminate with Vijayadashami on Oct. 15.

Arjuna’s name has not been included in the list as there is a bar on using elephants above 60 years of age for any rigorous work. The State Government has already decided that this year too, it will be a simple Dasara owing to the pandemic and as such, a scaled down Gajapayana, the march of elephants from the forest camps to the Mysore Palace, is likely to be held on Sept. 13 or 15.

The pachyderms, accompanied by their mahouts, kavadis and their families are expected to enter the Palace on Sept. 16. The official list of elephants that will be participating in Dasara will be announced by Mysuru District Minister S.T. Somashekar on Sept. 8 (tomorrow) at the Dasara Executive Committee meeting to be held at Zilla Panchayat Hall.

A list of 16 elephants has been readied and eight will make it to the final list. Already Mysuru Deputy Conservator of Forests Dr. V. Karikalan has visited various camps to identify the elephants and has thoroughly checked their health and weight. Normally 14 elephants will take part in the Dasara celebrations, but now under pandemic circumstances, only eight will participate.

Abhimanyu has been participating in Jumboo Savari for the past 19 years and holds the record for participating in the most number of Dasara celebrations. He is stationed at Mathigodu Elephant Camp in Kodagu district. Abhimanyu is 2.68 meters tall and 3.51 meters in length, weighing around 4,550 kgs.

He was captured in 1977 from Hebballa forest range in Kodagu and had been used extensively to capture other wild elephants. He has travelled to Madhya Pradesh, Odisha and Goa to help in the capture of wild elephants and tigers.

Abhimanyu is not only strong, brave and fearless but also intelligent, who is quick to understand, learn and devise or apply ideas. The tusker perfectly fulfils the responsibility given to him and understands where he is being taken when being led from his camp and prepares himself for the task.

Last Dasara, only five elephants — three male and two female — took part in the celebrations,  but sources said that this year, there will be eight elephants — five male and three females.

The elephants that are likely to make it are Abhimanyu (55) and Gopalaswamy (39) from Mathigodu, Vikrama (48) from Anekadu, Kaveri (43) and Dhananjaya (38) from Dubare, Ashwathama (34) from Doddaharave in Nagarahole, Chaitra (50) and Lakshmi (17) from Rampura camp of Bandipur are likely to figure in the final list.