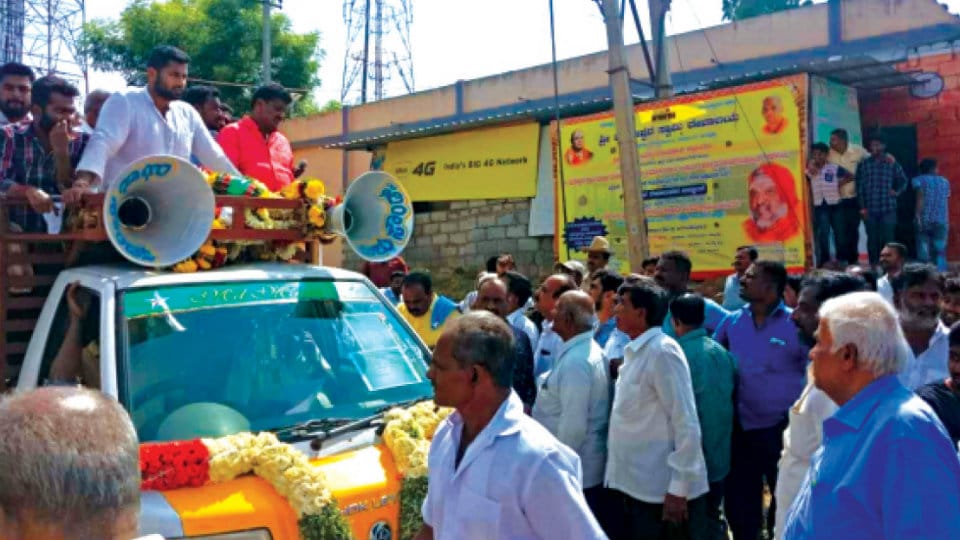 Mandya: Striking an emotional chord, Abhishek Gowda, son of actor-turned-politician late M.H. Ambarish appealed voters to elect his mother — Sumalatha Ambarish — an independent candidate from Mandya Lok Sabha constituency as they blessed, supported his father who shined in both politics and film industry.

Addressing a large gathering of people during his road shows at various villages of Nagamangala Assembly segment yesterday, he said that other than this mother, there are three more Sumalathas in the fray which would confuse the voters. People must vote for her mother’s symbol ‘Farmer blowing a trumpet’ in serial number 20 in EVMs, he added.

Stating that their political opponents are making baseless allegations against his mother Sumalatha and their family members, voters must elect their mother with a record margin votes without giving importance to these allegations.

“Ambarish and his family believed the people of Mandya, contested in this election to uphold the self respect of the people of Mandya. People must give a befitting reply for their political rivals by electing her mother to Parliament,” he appealed people with folded hands.

He said that his father late actor Ambarish had won the hearts, love and affection of the people of Mandya. The conscious voters of Nagamangala must uphold the dignity of Mandya without yielding to money, liquor, freebies and other influences offered by JD(S).

Abhishek’s style of appeal similar to his father Ambarish’s style won appreciation from                   the people.