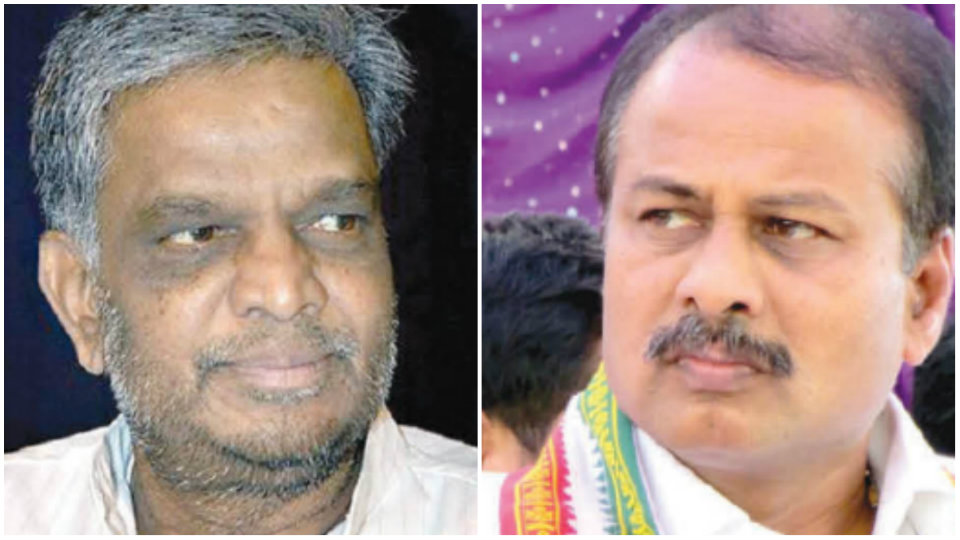 Chamarajanagar: For various reasons, Chamarajanagar Reserved Lok Sabha constituency has been labelled as a high voltage constituency. Though ten candidates are in the fray now for the LS polls, it is obviously declared as a straight fight between former Union Minister and BJP candidate V. Sreenivasa Prasad and sitting MP and Congress candidate R. Dhruvanarayan.

Both of them were in the same party for several years before Prasad moved to BJP and now the straight fight in the election has drawn everyone’s attention. Dr. Shivakumar is also contesting on a BSP ticket who could also pose a tricky issue.

Chamarajanagar Reserved LS constituency comprises four Assembly constituencies of Chamarajanagar and four from Mysuru. The LS constituency has 4 MLAs from Congress, 2 from BJP, one each from BSP and JD(S). With JD(S) and Congress forming a coalition, their unified strength becomes 5 with Dhruvanarayan representing as coalition candidate.

Before the LS election was announced, Congress was deemed as the winner in the constituency with Dhruvanarayan having emerged victorious twice earlier and a lot of good works to his credit.

Added to that, BJP had no strong contender to be fielded as Prasad had opted a voluntary retirement from politics. However, a few BJP leaders and others convinced the top brass that Prasad was the only person to offer a good fight for the coalition candidate. They also persuaded Prasad to contest in the poll which at last materialised resulting in the constituency getting a high voltage label.

Dhruvanarayan had defeated A.R. Krishnamurthy of BJP in 2009 LS polls by a thin margin of 4,002 votes and the margin shot up to 1,41,182 votes in 2014 polls. Now Dhruvanarayan is possibly aiming for a hat-trick.

Dhruvanarayan is banking on development works in Chamarajanagar over the last 10 years like development of National Highways, establishment of Kendriya Vidyalaya, Agricultural College, Law College and Passport Seva Kendra during his campaign. Now with A.R. Krishnamurthy in Congress, which has the backing of JD(S), it has become a blessing for Dhruvanarayan.

BSP too has its own vote bank in the constituency with the party Legislator hailing from Kollegal Reserved Assembly constituency, the party’s LS candidate Dr. Shivakumar too is confident to win a sizeable number of votes which could also play a part in the straight fight between Prasad and Dhruvanarayan.

The caste factor too could play a role in the constituency said to be dominated by Dalits and Veerashaiva-Lingayats.