Home » Columns » Abracadabra By K. B. Ganapathy » Abuse of Law against our own meek people and Intelligence Agencies 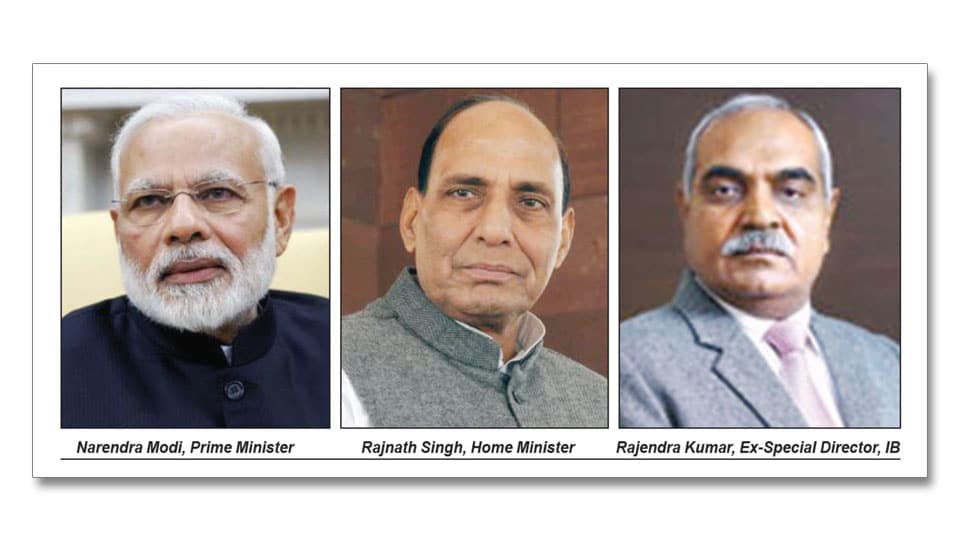 Abuse of Law against our own meek people and Intelligence Agencies

“The more I learn about people, the more I like my dog’ — Mark Twain

Reading daily newspapers and watching TV channels, specially TV9, I get a feeling that a violent and greedy minority in our society is not going to change despite there being a Police Force, Law Courts and above all, hundreds and thousands of Temples, Churches, Mosques and Ashrams with Seers preaching goodness of life, tolerance and moral values. They also tell us that, above all, there is a God above to reward or punish us for our good or bad deeds.

In Tamil language there is a proverb which says, ‘King will punish you immediately, but God waits.’ This is the problem. Some crimes are so inhuman the perpetrator of such crimes must be punished, if not immediately, at least within a few days or months.

For example, TV9 was showing a case of one politician by name Ramakrishnappa, with a heavy mush like that we see in Ravana of Ramayana, manhandling a Head Mistress in her school chamber. And then, even as she pleads for mercy, he pulls out a rope from his pant pocket and whips her like she was an animal. Her fault: She had borrowed Rs. 70,000 at usurious rate of interest from Ramakrishnappa and she had not paid the interest for the last four months nor returned the money.

Later she told the media that she had in fact paid over Rs. 70,000 as interest alone so far and due to difficulties she could not pay interest in the last few months.

Watching that brute of an intolerant, demon of a man thrashing that helpless woman, I was so disturbed that I instinctively moved towards the TV to help her. It was my wife, who had turned her face away from TV, who said, “What are you doing” and put me back to my senses.

This happened in the suburb of  Bengaluru Rural District in a village called Singanayakana Halli. The brute of a tormentor Ramakrishnappa is now absconding according to the following day’s report in TV9.

Now what? Next day, I scanned the two Kannada and English newspapers published from Bengaluru for this news. I could find only one of the four papers, I browsed, carrying this item, that too not prominently. Let it be. A scoop like this of great human tragedy was not given due importance. I do not know for what reason. Suppose a VIP is thus cornered and mercilessly beaten up, wouldn’t other channels and newspapers carry it with bold headlines? The meek, the poor suffer thus at the hands of the powerful and influential. Even the Police become reluctant to register the case and try to settle the case by acting as mediators.

This is a fit case to be put on a Fast Track Court with the Law Courts suo motto taking the case on record when State Police and Prosecutors go condescending towards the political masters to help the culprit go scot-free or get an acquittal.

We have so many NGOs (some of whom are honest and not for making money) and they too can come forward to help this Head Mistress in distress.

I wondered, whether TV9 would have telecast this case if there was no proof of this brutal attack on CCTV camera. Fortunately, for the victim, the camera was operational. From the report I saw on TV9, it was clear the Police were not helpful until her family members pursued the case. I was shocked that there were ‘human beings’ who were gathered at the Police Station in support of the culprit Ramakrishnappa.

I wondered if that villain is in judicial custody or on bail. I am sure there are many such violent acts against the poor and women in our State and country that go unreported. Therefore, Police too avoid registering the case or close it with that “escape route” called ‘B-Report’ being venal as they are. It is here publicity comes to the help of such victims.

It is imperative, therefore, for the Police to obey the Law rather than the corrupt, intolerant, greedy political masters.

It is unfortunate that once the political party in the opposition gets power, it also starts behaving like the earlier Government that was misusing the Police and the Investigating Agencies like CBI, ATS or our Siddharamaiah’s ACB (Anti-Corruption Bureau).

Here is one bad example for which I hold the present BJP Government at the Centre of being guilty and dishonest, like the previous UPA Government, in keeping the sinister option to ‘fix’ the IB officials as and when it wants.

Take this case. This report is from The Hindu dated 23.12.2017 with an apt headline that bares the hypocrisy of the present NDA Government reading, “Rajnath gives insight on Politics”. Esoteric? No. Indeed Rajnath Singh, Home Minister, has given our Intelligence Officers an “insight” on how politicians keep the political gunpowder dry for use against their rivals when need arises.

He was speaking at the 30th Intelligence Bureau (IB) Centenary Endowment Lecture where he addressed young Intelligence Officials.

It may be recalled that one IB Special Director Rajendra Kumar, now retired, was named (as an accused) in the notorious alleged Ishrat Jahan encounter case by another Investigating Agency the Central Bureau of Investigation (CBI).

The allegation against IB official Rajendra Kumar was that he provided fake inputs saying that Ishrat Jahan along with three others were heading to kill the then Gujarat Chief Minister Narendra Modi in 2004. The UPA Government came to power at the Centre and the CBI was under the control of the Central UPA Government.

Fortunately, after the NDA Government, with Narendra Modi as Prime Minister, came to power in 2014, the Home Ministry under Rajnath Singh denied sanction to the CBI to prosecute IB Officers, including Rajendra Kumar. These Officers faced charges of murder as well as criminal conspiracy slapped by the then CBI under UPA.

Keeping the above case of abuse of political power against IB officials in mind, Rajendra Kumar asked the honourable NDA Home Minister Rajnath Singh to bring a Law to provide immunity to Intelligence Officials so that no external agency (like CBI) is allowed to investigate the IB officials.

Now, what did the politician Home Minister Rajnath Singh say? The Hindu writes, “Mr. Singh avoided a direct reply and said that he would look  into the subject”.

Well, Rajnath Singh thinks he has done his job by denying the sanction to CBI to prosecute these Officers. No. That was his action as a politician. But, he must now rise to be a Statesman looking at the future good of the country.  Otherwise these IB Officers will be demoralised and may not provide intelligence input that may jeopardise the security of VIPs or risk their job and even life.

Therefore, Rajnath Singh  must consider the IB Official’s suggestion with all seriousness. Who knows, because the case against these IB officials being criminal (murder and conspiracy attracting death penalty), if the next Government is UPA it can revive the charges revoking Rajnath Singh’s order. In the circumstances, it is necessary to bring a Law as suggested to protect these IB Officials from this kind of vendetta-like situation.

Moreover, if this situation continues, the intelligence gathering machinery of the country itself will collapse.  We are warned.