Home » News » After a gap of 4 years…: KSOU Convocation held 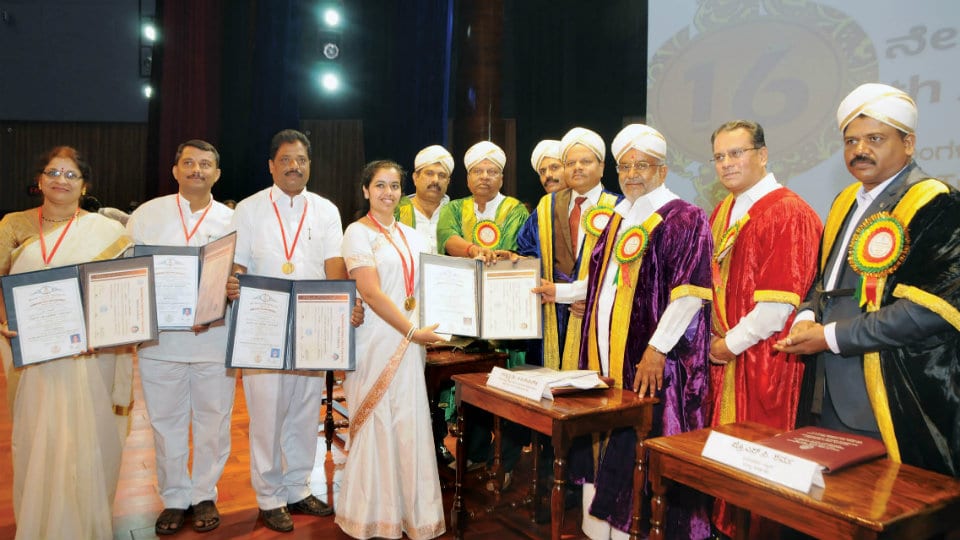 After a gap of 4 years…: KSOU Convocation held

Knowledge acquisition must for betterment of society: NAAC Director

Mysuru:  “The acquisition of knowledge must be utilised for the betterment of society. This is possible only when it is implemented. There is a proverb in Kannada “Kereya neeranu kerege chelli,” and this exemplifies the purpose of gaining knowledge that should be returned,” said Prof. S.C. Sharma, Director, NAAC (National Assessment and Accreditation Council),  Bengaluru.

He was delivering the 16th Convocation Address of the 2012-13 batch of the Karnataka State Open University (KSOU) after a gap of four years,  at the Convocation Hall, Muktagangothri, here this morning. Exhorting the younger generation of degree holders gathered, he said that Dharma on this occasion may be appropriately described as having two legs — one is Knowledge and another is work, which is Karma.

“By means of knowledge and karma, it is possible to destroy the thousand-legged Adharma which is also known as Injustice. A man who grows by embodying the better characters such as good-heartedness, good thinking and thought of doing good deeds will have pro-societal attitude and better personality development,” he said.

However, he pointed out that a person who is filled with anger and jealousy will have a disturbed mind and will not be able to achieve practically anything in this world, but a person with peace of mind, who has the grace to excuse others can achieve something.

Quoting vachanas from Saints like Basavanna, poets like Kuvempu and Bhatruharihave, Prof. Sharma said, “We should always move towards particular goal with good intention and a firm mindset. We should overcome all destructive qualities. This is called Moksha. Otherwise hundreds of Gods cannot remove our ignorance. Hence, the true meaning and object of Dharma is to engage in good deeds always. That is called devotion,” he said.

Higher Education Minister and Pro-Chancellor G.T. Devegowda, who presided, instead of saying ‘Granted’ for the degrees to students, said, ‘Dissolved’ and when this faux paus was brought to his notice, he corrected himself.

When KSOU Dean announced the list of students of Kannada, Hindi, English, Telugu and Urdu languages and asked them to get up, there was not a single student present which forced the Dean to walk away.

In all, 17,512 students received degrees out of which 12,148 were women and 5,354 men. Ten candidates received Ph.Ds, seven gold medals and eight cash prizes.

However, only about 1,500 people turned up for the Convocation out of whom there were about 1,000 candidates and the remaining were their family members. Since this is a distance education programme, most of the candidates who are already in jobs, prefer to take their degree certificates by post, said a source in the University.

There was a festive atmosphere in the campus as this was the first convocation held in the swanky new Convocation Hall.

One of the candidates Imraz, a PG degree holder in Special Education, who had come with her child, speaking to SOM said that this degree would greatly benefit her to help the special children.  “It was only due to the cooperation of my family that I was able to complete my PG degree. However, all my efforts had proved futile due to the uncertainty after the de-recognition of KSOU courses by the University Grants Commission (UGC). But the efforts of the KSOU in regaining the recognition has helped all of us,” she said.

READ ALSO  KSOU grads not eligible for jobs at MyMUL!

Another candidate Neelambika who also got a PG degree in Special Education said that all of them were worried about the lack of recognition following the action of UGC. But after four years KSOU holding the convocation had laid their anxiety to rest, she added.

Anuradha Pai who has bagged two gold medals in M.Com in Accountancy said that she was very surprised when the KSOU authorities called her over phone and informed that she had won two gold medals.

2 COMMENTS ON THIS POST To “After a gap of 4 years…: KSOU Convocation held”