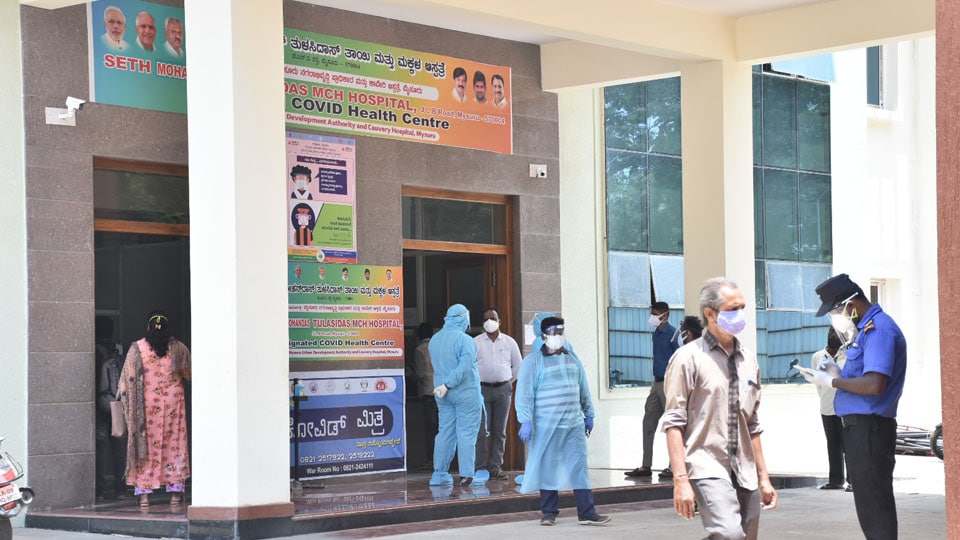 After K.R. Hospital, Tulsidas Hospital to get oxygen-generating plant

Mysore/Mysuru: In a move that will augment oxygen manufacturing and supplies to Mysuru, BAI (Builders Association of India) Mysore Chapter and CREDAI (Confederation of Real Estate Developers Associations of India Mysore Chapter) under the aegis of Mysore Builders’ Charitable Trust (MBCT) will donate a Medical Oxygen Generator Plant to Seth Mohandas Tulsidas Hospital on JLB Road, which has been converted into a COVID Hospital.

The oxygen manufacturing plant is the second one to come up in the city with the first one being the Defence Research and Development Organisation (DRDO) plant that is coming up at K.R. Hospital premises. Such has been the demand that hospitals have been putting out SOS calls for more oxygen. With the two plants, Mysuru will get enough ammo to fight any oxygen crisis in the near future.

Speaking to Star of Mysore, BAI Chairman K. Ajit Narayan and CREDAI President N.S. Muralidhara said that the donation of Rs. 40 lakh for the oxygen plant under the aegis of Mysore Builders’ Charitable Trust will be given from Corporate Social Responsibility (CSR) funds. “We are getting the plant from Vadodara (Baroda) and it will be operational before June 10. We have already paid an advance of Rs. 25 lakh,” they said.

Mentioning the technical details of the plant, Ajit Narayan said that Pressure Swing Adoption (PSA) Technology will be used in the plant where it is designed to produce on-site oxygen so that the dependency on oxygen cylinders is eliminated.  The PSA oxygen plant is the cleanest, least troublesome and minimal maintenance-required plant, he added.

The air compressor compresses atmospheric air up to working pressure. After the dust particles are suspended, a coal tower absorbs traces of oil particles and other impurities. An air tank then acts as an accumulator for the pressure swing adsorption cycle.

PSA technology is used to separate gas species from a mixture of gases under pressure. The plant uses a clean technology that absorbs nitrogen from the air and extracts oxygen for supply to specific facilities.  The oxygen thus generated can be supplied straight to the wards through a dedicated pipeline or compressed to fill cylinders. It uses molecular sieve technology to generate oxygen directly from atmospheric air.

“The plant will bring a quick and long-term solution to the current oxygen crisis in Mysuru, reducing the dependence on liquid oxygen distribution channels that are stretched beyond their limits. The plant will deliver more than 90 percent oxygen concentration, only requiring power and water supply from the hospital,” Ajit Narayan added.

Medical grade oxygen has an oxygen concentration between 90 percent and 96 percent. The remainder is principally argon and nitrogen. The plant can fulfil oxygen requirement of 80 beds at Seth Mohandas Tulsidas Hospital and can produce 148 litres per minute, said Muralidhara.

“Mysuru Urban Development Authority (MUDA) has constructed the hospital that is a top-notch one and in no way less than any big private hospital. When MBCT proposed a plan to donate an oxygenation plant to Mysuru, MUDA Chairman H.V. Rajeev evinced keen interest and agreed to provide space and a platform at the Hospital to establish the plant,” he explained. The staff for maintain and operationalise the plant will be given by MUDA.

According to a press release by T.N. Hemanth, MBCT Managing Trustee, in this unprecedented situation, the aim behind setting up PSA plant is to strengthen the public health system and ensure that this healthcare facility has a captive oxygen generation facility. “Such an in-house captive oxygen generation facility would address the day-to-day medical oxygen needs of Tulsidas Hospital and Mysuru district,” he added.