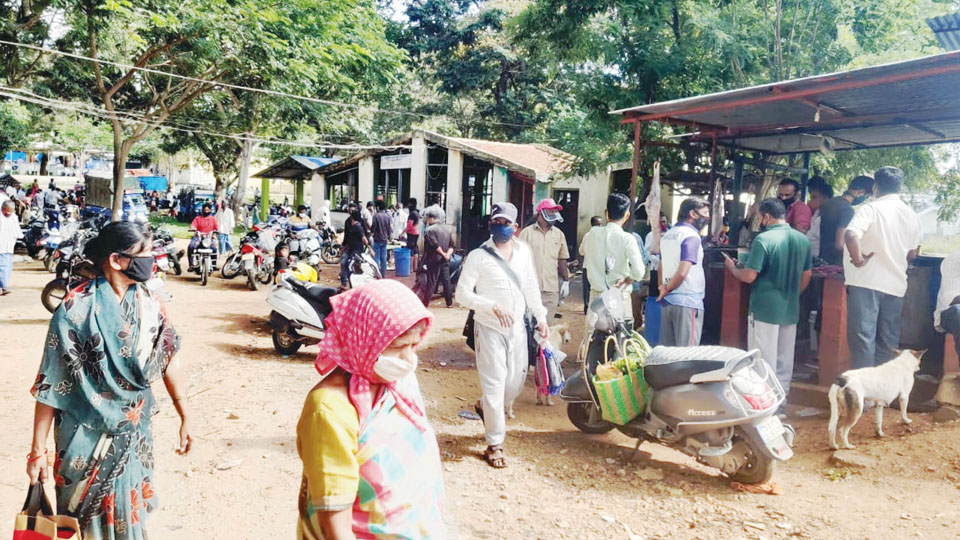 Srirangapatna: The two-day a week opening of meat and fish shops in Mysuru city and district has forced many meat eaters to enter Mandya this morning to grab their share of meat. They travelled in vehicles early in the morning to avoid Police action.

Meat is a favourite dish for many in Mysuru on weekends, especially Sundays. But today,  due to the stringent lockdown announced by the Mysuru District Administration, many meat lovers were seen rushing to Srirangapatna, KRS, Belagola and surrounding villages that come under Mandya District to purchase meat and fish.

More than 500 people from Mysuru were found purchasing chicken, mutton and fish at Mogaralli Manti, a small village that is located on Mandya-Mysuru border and an equal number of people flocked the KRS meat and fish market. However, there was no semblance of social distancing in the markets and the entire place was jam-packed.

Sensing the demand, a few enterprising sellers sold the non-vegetarian products in auto-rickshaws on the Belagola-Pump House Road. Villagers said that usually people from Mysuru and local residents throng the markets every Sunday to purchase meat. But today there was an unusual rush as many from Mysuru city had come there for purchases.

Some of those merchants who sold meat and fish in Mysuru transported their products in autos to Mandya to be sold there. They said that the Mysuru District Administration had unscientifically imposed lockdown allowing only sales on Monday and Thursday.

“Very few people eat meat on Monday and Thursday and it is a loss for us. What else we can do to survive,” Ahmed, who was selling fish in an auto rickshaw along with his son Mujeeb, told Star of Mysore.

“We are buying more today as we are not sure whether meat shops in Mysuru city will open tomorrow (Monday) as many do not eat non-veg,” said a resident Vijayanagar Second Stage. As the meat shops drew crowds, people were seen buying meat in a hurry fearing that the Police might come any time to stop the sales as a precautionary measure against COVID-19 since social distancing was hardly maintained.

The Mandya District Administration had announced complete lockdown for four days from May 25 and the curbs ended yesterday. This also led to the extra rush for meat today.  “As per the orders issued by Mandya Deputy Commissioner S. Ashwathi, the district was totally closed for four days from May 25 to 29. No stalls, including vegetable, fruits, meat stalls, were allowed to open during this period,” Srirangapatna Tahsildar M.V. Roopa told Star of Mysore.

KRS Panchayat Development Officer Rafiq said that locally they had tried to put some restrictions as it was common for people crowd at meat and fish markets. “When we tried to impose curbs, the merchants and purchasers objected and they questioned us at a time when the government is allowing purchases why the Panchayat was restricting buying,” he said.