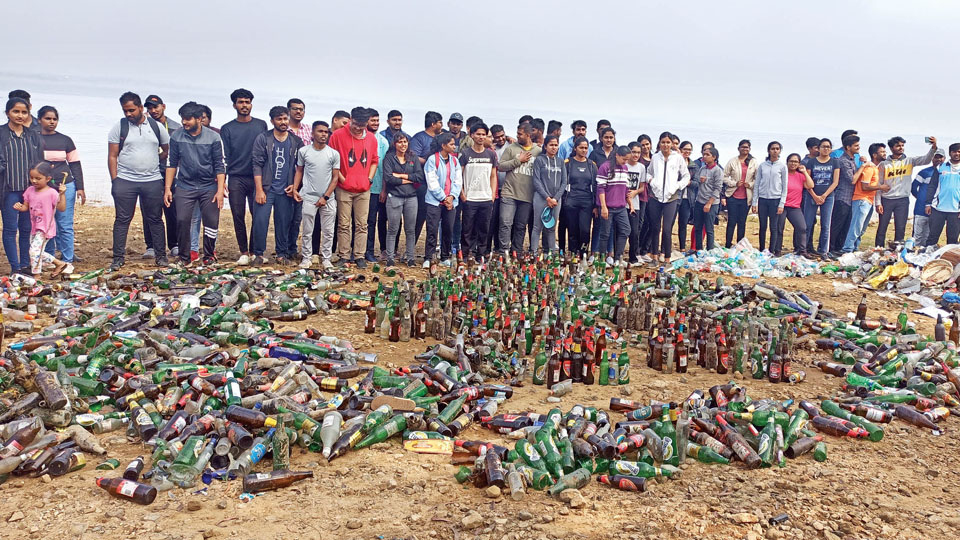 Mysore/Mysuru: While a group of Japanese spectators meticulously cleaning the stands of FIFA Qatar World Cup stadium picking up trash scattered across the rows of seats warmed hearts globally, a cleaning campaign launched by a group of youths to pick up trash from the serene backwaters of Krishna Raja Sagar (KRS) Dam at Meenakshipura yesterday was well-appreciated by the local residents and also the Panchayat administrators.

The day-long campaign was launched by Yuva Brigade Mysuru and the students of NIE-IT and they collected thousands of liquor and beer bottles, trash, food waste, paper and plastic plates from the beautiful backwaters that has been converted into a place to dump waste by picnic-goers and party freaks.

The cleaning task yielded one tractor-load of waste and another truckload of empty liquor and beer bottles.

Meenakshipura is a favourite picnic spot where people come from far and wide to chill out in the water and also on the riverbank. Due to unregulated tourism here, waste is indiscriminately and carelessly dumped at all places.

Local residents say that while the KRS Reservoir provides water for irrigation and drinking purposes, the backwater remains unutilised and has turned into a haven for illegal activities. “The grand plans of the State Government to utilise the backwaters for tourism activities like water sports have not materialised so far. There are islands in backwaters with strong tourism potential,” said a resident.

“Most of the people come here to have fun and they bring along food and liquor. After the party, they discard the waste and leave. The Anandoor Gram Panchayat has the jurisdiction over the Meenakshipura backwaters and whenever we raise the issue of trash-filled environs, we get a standard reply of lack of funds,” said another resident.

More than 70 youths participated in yesterday’s campaign and they collected the trash from the nook and corner of the area and cleaned the leftovers. Anandoor Gram Panchayat Secretary Annapoorna, Panchayat Development Officer Girish and many villagers gathered at the place and lauded the efforts of the youths.

The youths urged the Panchayat authorities to at least erect signboards in the vicinity asking the people not to litter and dirty the clean surroundings. The collected waste was then transported to a shed inside Anandoor Gram Panchayat limits for segregation and disposal.