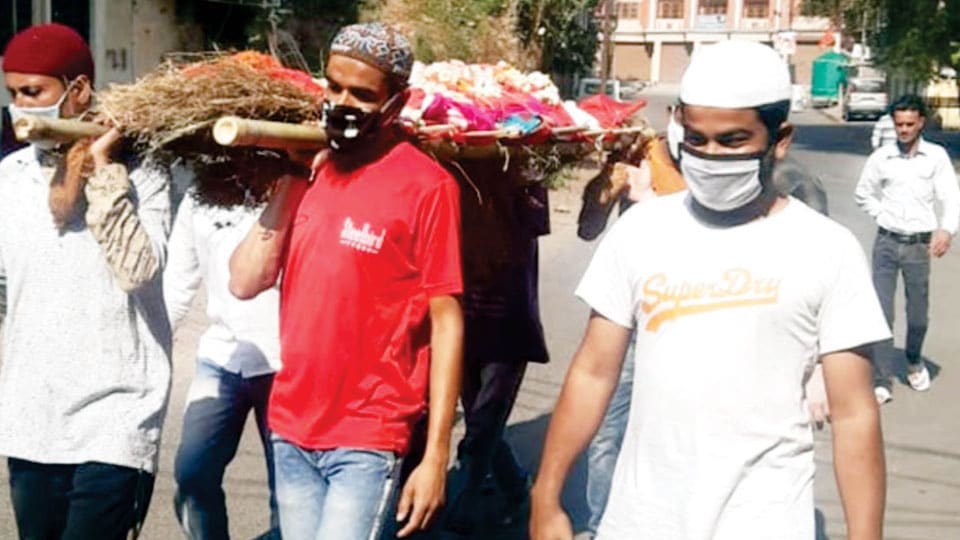 New Delhi: Unable to find a vehicle amid the nationwide lockdown, a Hindu woman’s body was carried by her Muslim neighbours to a cremation ground in Madhya Pradesh’s Indore. The young men also helped the woman’s sons with her last rites as most of her relatives did not participate in the funeral due to fears of Coronavirus.

Videos and photos, that have been widely shared on social media, show the woman’s bier (coffin) being carried by the young men.

Wearing masks, the youths made arrangements for the funeral and carried the elderly woman’s body on their shoulders to the cremation ground around 2.5-km away, State Congress Spokesman Narendra Saluja told a news agency.

The 65-year-old woman died on Monday after a prolonged illness. She is survived by two sons who could come home much after her death due to lockdown restrictions.

Senior Congress leader and former Chief Minister Kamal Nath applauded the gesture of Muslim youths, saying they have set an example in society.

“It is praiseworthy that people from the Muslim community along with the woman’s two sons carried the body on their shoulders for her last rites. This has set an example in society. It reflects our Ganga-Jamuni culture and such scenes enhance mutual love and brotherhood,” he said in a tweet in Hindi.

The Muslim youths told that they considered it as their duty and knew the woman since their childhood.