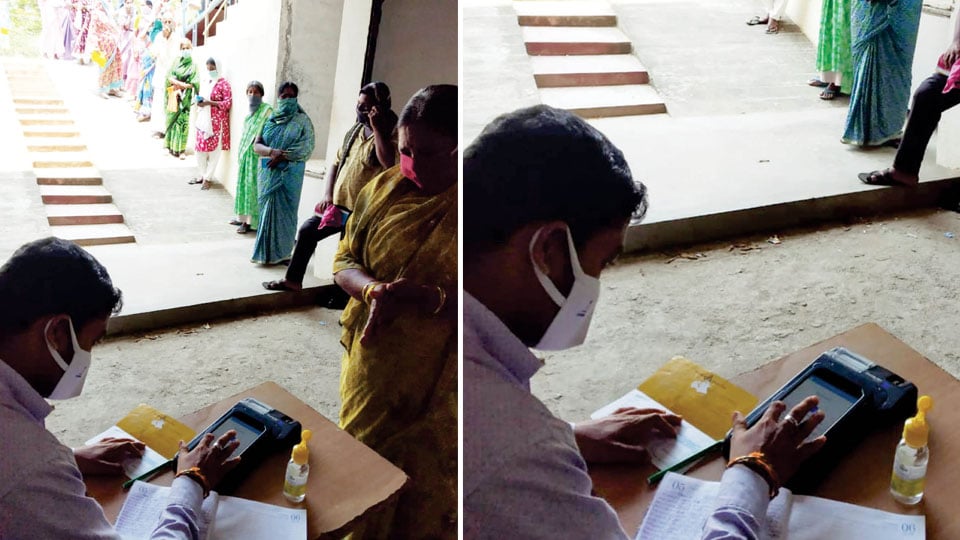 Mysore/Mysuru: Though the District Administration has been appealing to the general public to stay indoors and maintain social distancing when they come out for purchasing groceries, vegetables etc., people seem to be keener on breaking the lockdown norms than protecting themselves from the COVID-19.

Following National Payments Corporation of India (NPCI) crediting Rs. 1,500 for the months of April, May and June to the Jan Dhan bank accounts of women under Pradhan Mantri Garib Kalyan Yojana and the account holders receiving messages about the money being credited to their accounts, hundreds of women this morning thronged various banks to withdraw cash from their accounts despite prohibitory order in place.

Apart from these Jan Dhan account holders, there are 3,97,580 beneficiaries of Old Age, Widow, Transgender and Disability pensions, family and retired employees pensions, who are also thronging the banks along with retired Government employees in large numbers to withdraw the benefits given by the Government.

While social distancing is being maintained at a few banks, the same is being violated at other banks, which has become a headache to bank officials.

Meanwhile, at the meeting chaired by Deputy Commissioner Abhiram G. Sankar and Lead Bank Manager Venkatachalapathy with Managers of various Banks such as State Bank of India (SBI), Canara Bank, Bank of Baroda etc., they have asked the Managers to follow COVID-19 guidelines and discussions on banks reaching the account holder instead of the account holder coming to the Bank was also held.

READ ALSO  Infosys begins evacuation of over 10,000 trainees from Mysuru

Speaking to Star of Mysore, Lead Bank Manager Venkatachalapathy has urged Jan Dhan account holders not to throng Banks as it may spread COVID-19 and added that money has been credited to only a few Jan Dhan accounts.

Urging people not to crowd Banks for enquiry purpose and be patient to two to three days, Venkatachalapathy said that there were plans to reach Jan Dhan benefits to account holders by taking Micro ATM to every area so that Jan Dhan account holders could withdraw the cash without coming to Banks.

Micro ATM service has already been started at Yelwal and Belikere branches of Canara Bank and sanitisers are also provided to the employees, he said and added that there are a total of 592 branches of various Banks in Mysuru district.