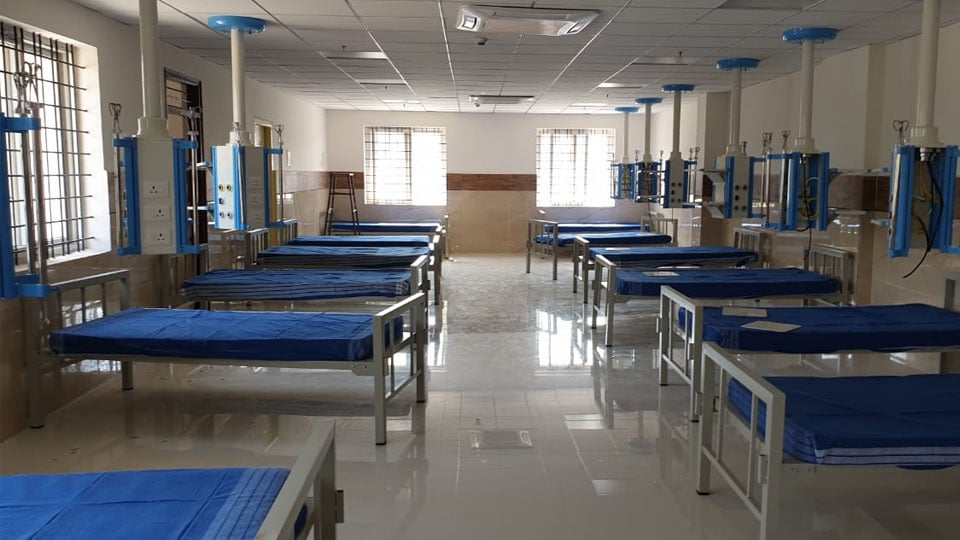 Mysuru / Madikeri: Amidst the news of extension or relaxing the lockdown after Apr. 14, here comes a good news. The first patient who tested positive for Coronavirus in Mysuru and the sole positive patient in Kodagu have been cured and have been tested negative. Both of them have been discharged from hospitals as per COVID-19 protocol.

Both the fully-recovered patients were released yesterday. With this, Kodagu has no positive cases while the number of positive cases in Mysuru has come down to 34 from 35. The very first COVID-19 case in Mysuru was confirmed on Mar. 21. He is a man in mid-30s, a resident of the city, who had travelled from Dubai to Bengaluru via Goa. He went to K.R.?Hospital and got himself admitted on Mar. 20 as he had fever and cough.

The patient, however, did not meet his friends and family members and had got voluntarily admitted to the hospital. He was tested positive later and now he has been certified as cured. The patient, however, has to remain in quarantine at his home for two more weeks as a precautionary measure.

Mysuru Deputy Commissioner Abhiram G. Sankar announced yesterday that the first positive patient is cured of virus and discharged. Mysuru Medical College & Research Institute (MMC&RI) Dean and Director Dr. C.P. Nanjaraj said that the patient has been cured of illness as two subsequent tests showed no COVID-19 virus and even the chest X-ray was clear. The individual, however, has to lead life in isolation at home for another two weeks, the Dean said.

In Kodagu too, the 32-year-old man who was the first — and the only patient — to be infected with COVID-19 has recovered. He was being treated in the isolation ward of Kodagu District Hospital from Mar. 16. The recent throat swab samples collected from him have tested negative for COVID-19 and he was discharged from the hospital and he drove his car to reach his home in Ketumotte near Kondangeri in Murnad yesterday.

The person had arrived at Kempegowda International Airport in Bengaluru from Dubai on Mar. 15 and he had travelled by a Rajahamsa bus and had reached Murnad on Mar. 16. After developing symptoms of COVID-19, he got himself admitted to the District Hospital. Before getting admitted to the hospital, he had come into contact with around 50 people in his native place. As the patient is now cured, the District Administration has decided to clear the prohibition imposed at Ketumotte.

Kodagu Deputy Commissioner Annies Kanmani Joy said that the discharged man had been asked to be home quarantined till further instructions. If the villagers of Ketumotte develop any symptoms, they should immediately visit the nearby hospital, she added.

Meanwhile, three persons from Mandya, who were in touch with attendees of a religious congregation in New Delhi, were tested positive for COVID-19 yesterday.

Following the lab reports, a high alert has been sounded in Mandya district. The new cases reported from Mandya have been moved to the Coronavirus hospital in Mandya. According to the authorities, patient number 171 is a 32-year-old youth while P172 is 36 years old and P173 is a 65-year-old senior citizen. At least 48 primary contacts of these infected people are kept in isolation. These three persons were in touch with P134, P135, P136, P137 and P138 who are being treated in Mysuru.

These five patients have a travel history to Delhi. A dedicated ward has been set up to treat these patients at Mandya Institute of Medical Sciences (MIMS). According to Mandya Deputy Commissioner Dr. M.V. Venkatesh, their condition is stable and they are responding to the treatment.

Soon after the district administration received the lab reports which confirmed the first COVID-19 cases in Mandya district, which was so far free from Coronavirus, the entire Malavalli and Nagamangala taluks have been declared as prohibited areas. While the swab samples of 3 out of 7 suspects have been found positive, the reports of other persons are awaited. Now, a red alert has been sounded in the entire district, especially in Malavalli and Nagamangala taluks.