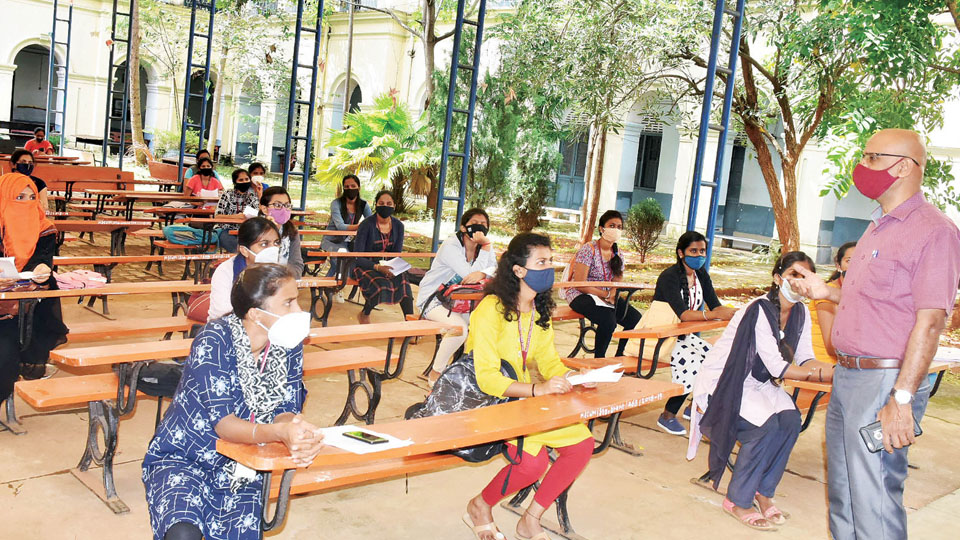 Bengaluru: After ten months due to COVID-19 pandemic, physical classes for all grades of Degree, Post-Graduate, Engineering and Diploma courses will commence from Jan. 15, announced Deputy Chief Minister Dr. C.N. Ashwathnarayan, who is also the Minister for Higher Education.

However, he has clarified that there will be both online and offline classes and students can choose anyone but attendance is compulsory.

Sharing this news with media here yesterday, after chairing a high-level meeting with officials of several Departments, he said offline classes for final year students of the above course had started from Nov. 17 last year, and had been running successfully. There was a demand from students to start classes for remaining grades also. Considering it in the interest of students, the decision to open all classes had been taken, he added.

It has also been decided to conduct paper and pen mode of exam (offline exam) in all colleges across the State on a common date after consultations with all Vice-Chancellors of State-run and Private Universities. The exam date would be announced soon, he said.

The Minister said hostels for all students would be opened simultaneously. All precautionary measures including COVID-19 test in Colleges, sanitisation, maintaining social distance have been taken care of as per guidelines issued by University Grants Commission and State Government, he added.

“Arrangements have been made for distribution of student bus passes to needy students expeditiously for which Transport Department has agreed. The Colleges had been asked to directly contact officials of  bus depot in their limits and coordinate to ensure concessional bus pass for their students”, Dr. Ashwathnarayana said.

He said National Cadet Corps (NCC) and National Service Scheme (NSS) training have been allowed to commence in colleges. Short-duration camps would be conducted for cadets to attend as well as to take up exam. While three-day camp had been allowed for NCC ‘B’ certificate exam, it would be five-day camp for ‘C’ certificate.

The Department of Social Welfare and Backward Classes had been asked to come out with separate Standard Operating Procedure (SOP) to be followed strictly in hostels. A separate SOP for library, canteen, academic and cultural activities and sports meets had been framed and it would be circulated to all educational institutions, the Minister said.