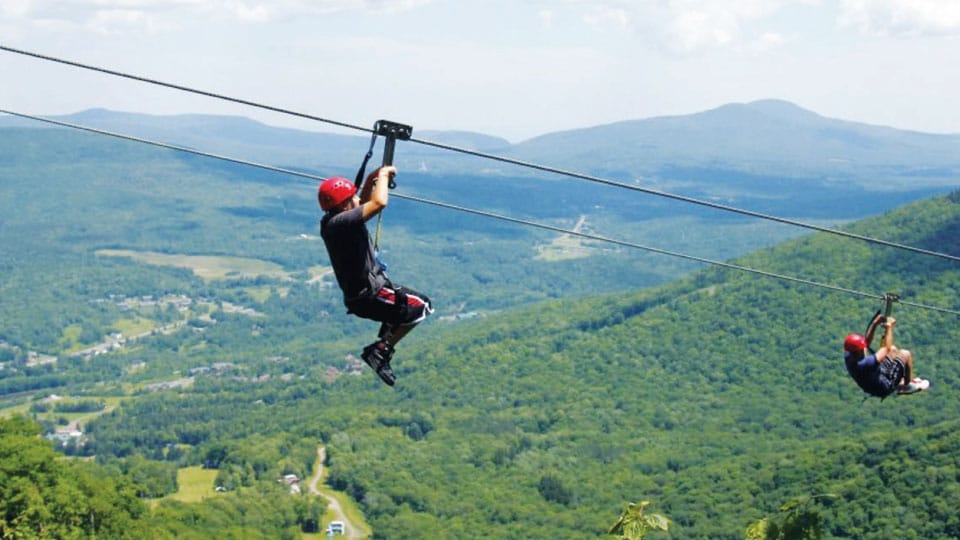 Mysuru: The ambitious plan of Tourism Department to construct a Zip Line atop Chamundi Hill has been dumped by the Forest Department as the project threatens the ecosystem, wildlife and the sanctity of the Hill. The Department wanted to promote adventure tourism as part of the already existing religious tourism atop the Hill and had proposed the idea of Zip Line.

A Zip Line is made up of a pulley appended to a stainless-steel cable extended between fixed points of different elevations. It is a cable that starts at a higher point than it ends. Using the natural decline of the slope, a person can glide down the wire on a pulley system that minimises friction to help the rider accelerate.

The Zip Line allows a person, fastened to the moving pulley, to zip from the top to the bottom of a cable, propelled by gravity. For gravity alone to propel the user, the Zip Line must be inclined to a certain degree.

In August 2017, the Karnataka Tourism Department had proposed to build a Zip Line along with a walking path on the eastern part of the Chamundi Hill and since the Hill comes under the jurisdiction of the Forest Department, Tourism officials had sought permission for the same. The Tourism Department had felt that less than one acre of land was required for the project and it would boost tourism in  the region.

The two-kilometre Zip Line was proposed to be built near Tower Circle on the Chamundi Hill-Ooty Road. Officials had proposed to build eight-foot concrete pillars inside the forest area that has been marked as Reserve Forest. A walking path was also proposed for the tourists to reach the Zip Line area.

Speaking to Star of Mysore this morning, Deputy Conservator of Forests (DCF) Dr. K.C. Prashanth Kumar said that the project has been rejected as it would harm the wildlife and the fragile ecosystem. “Chamundi Hill supplies rainwater to Karanji Lake and its ecosystem is sensitive. There is a wide variety of wildlife living on the Hill and its surroundings. This project will threaten their very existence,” he said.

The DCF said that this was the second time that the project was rejected by Forest Department. “It was also proposed before I took over as DCF and was rejected. We have given valid reasons for junking the project. Already the Hill has been developed to the maximum and the urbanisation has considerably reduced the wildlife habitat. Moreover, the Hill cannot be treated as an adventure spot. We will do more harm to the flora and fauna with such projects,” he said.

Revealing that the Department had recently conducted a physical survey of the Chamundi Hill that is home to leopards, porcupines, wild pigs and other bird and animal species, Dr. Prashanth Kumar said that the survey is being analysed to take the count of the species.

“The survey has been carried out with over 68 camera traps set up at over 38 locations. We will get the authentic results of the analysis in a month or so and we would know the extent of damage we have caused to the species when compared to the data obtained from previous surveys,” he added.

It may be recalled here that the Zip Line project is not the only development project that has been rejected. In the past, there were proposals to build a ropeway (cable car) and a canopy over the climbers’ steps. These projects too have been abandoned following protests from environmentalists.