Home » Columns » Abracadabra By K. B. Ganapathy » After the Elections: Musings on Criminals in the House! 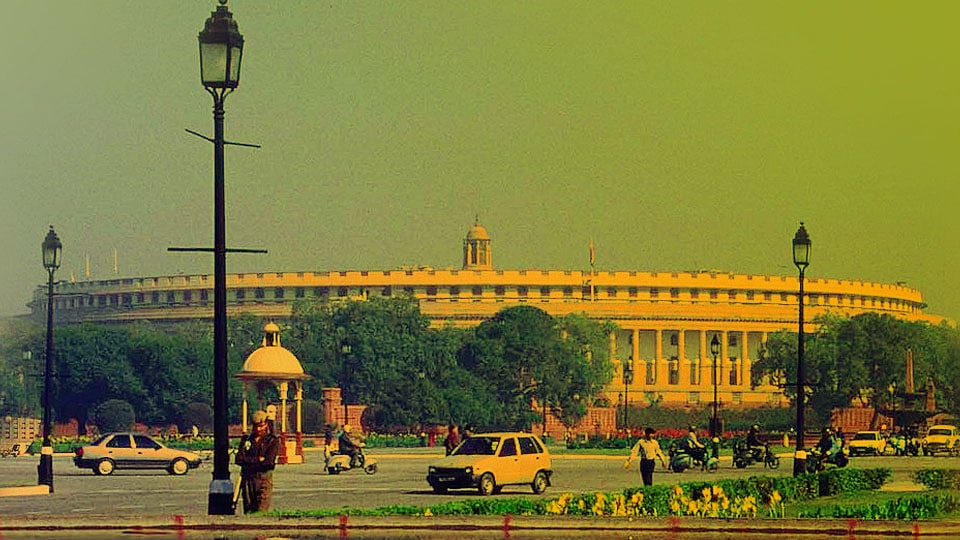 After the Elections: Musings on Criminals in the House!

Now that the Parliamentary elections are over and the result is before us, it is time to introspect and recall the words and conduct of our politicians, specially all those who contested and won or lost.

There was hardly anyone who did not spit fire and brimstone against his or her opponent. If the 2014 election campaign had begun on a confident note for the Congress hoping to do a hat-trick, having cast a cloud over BJP’s NDA by defeating it with its allies of the UPA in 2004 and following it with another success in the 2009 elections, the Congress in 2014 was in fact deluding itself of a third successive victory foolishly underestimating the strength of BJP and its NDA allies.

The first salvo of the election war of 2014 was fired by a leading, senior member of the exclusive Lutyens’ Club Mani Shankar Aiyar. He openly insulted the then Prime Ministerial candidate of BJP (NDA) and the Chief Minister of Gujarat by speaking about his poor family background as a ‘Chaiwallah’ and declaring in great hubris in the AICC meeting that ‘a Chaiwallah can never become the Prime Minister of India and if Modi wants he (Aiyar) could provide some space in the AICC Office to sell tea.’ But at the end of the ‘war’ the Chaiwallah won and became the Prime Minister.

What followed thereafter till the 2019 elections is now in the public knowledge. The Congress and its acolytes living on the patronage of Nehru-Gandhi family were shell-shocked at the humiliating defeat of the Congress Party with a score of all-time low in securing seats — 44 — in its long 133 years of history. This Grand Old Party (GOP) which for decades covered itself with glory and won peoples’ love and trust suddenly found itself in the dumps. It could not even become the official Opposition in the Lok Sabha.

Surprisingly, there was more anger in the Congress camp than disappointment. And from day one Congress and its parasites — pseudo-intellectuals and pseudo-secularists — began to scream in utter frustration. They began to talk about intolerance of Narendra Modi’s Government. They picked up stray cases of ‘lynching’ by cow vigilantes as if this kind of violence was engulfing the country.

But the most funny as much as strange behaviour was found among those who decided to return the ‘awards’ the Union Government had honoured them with, as an act of protest against intolerance. However, 99% of those awards were given by the Congress or Congress-led UPA Government!

Be that as it may, the credit for discrediting this Lutyens’ Club and the ‘Khan Market Gang’ that had entrenched and abused power for many decades should indeed go to Narendra Modi and Amit Shah, the unbeatable combination. Both are from Gujarat. And thinking of them, one could not help thinking of other two giants from Gujarat who were responsible for shaping and changing the destiny of our country — Mahatma Gandhi and Sardar Vallabhbhai Patel.

People vote in good faith, hoping their representatives would work for the good of the people and the country, but unfortunately in India a majority of law-makers are with criminal background. Naturally they will work for their own benefit at the cost of the country’s interest. They are not patriots, they are pirates. Parasites.

Take for example the just held 2019 April-May elections. The figure available about those elected having criminal background are as follows:

The question is how to prevent this phenomenon from happening in our country’s supreme law-making body. This problem of sieving out bad candidates is endemic and one is left wondering why nobody is doing anything to prevent criminals from contesting the elections. And one day, during the elections in April, I saw an unusual advertisement being published in Star of Mysore with the heading “Declaration about criminal cases” released by the Mysuru-Kodagu BJP candidate Pratap Simha. It had an introduction reading as follows:

As per the judgement dated 25th September, 2018, of Honourable Supreme Court in WP (Civil) No. 536 of 2011 (Public Interest Foundation and Others Vs Union of India and Another). The advertisement text mentioned of the three criminal cases pending in different Courts, case number and status etc.

It was when I enquired about how and what of it that I learnt of the Supreme Court’s decision to curb these criminal elements from contesting the polls. May be hoping the people on seeing these advertisements will be able to make their choice wisely !!

But when we see the result, the good intention of the Supreme Court does not seem to have made any difference. This is our India boy ! Anyway, it is hoped all those who have won in this elections have complied with the Supreme Court’s judgement dated 25th September 2018 and have advertised under Format C-1 as done by our MP Pratap Simha. I am told that those who have NOT done may get disqualified if the opponent of the winning candidate goes to the Court within 45 days of the declaration of the results. Since the election results were declared on 23rd May, there is still another 26 days to challenge the winners under the Apex Court’s judgement.

It appears, before the SC came up with its September 2018 judgement in this regard, hoping to end the menace of criminals entering the Lok Sabha, 33% of its members were criminals, some facing serious charges of murder, rape and kidnapping. In 2018 (last year) the BJP-NDA was in power and it did not do anything to solve this problem nor did the earlier Congress Government (from 2004 to 2014). After all, politicians are politicians when it comes to power-game. So it was a noble soul and a patriot who filed a PIL in the Supreme Court way back in 2011 (when Congress-UPA was in power) and we got the judgement in September 2018, after 8 years! Thank God, at least we got it before this 2019 elections with some positive result, but to what extent? We will know after 26 days. Let it be.

As a result today a candidate has to provide these personal information to the Returning Officer at the time of filing his or her nomination paper. However, our  politicians are known to circumvent the law somehow and nullify what good the Supreme Court was doing in this regard.

Rahul Gandhi was furious. For once he was not with his own Government which seemed to protect criminals in the Parliament. Wonder, what was the reaction of the Accidental Prime Minister Dr. Manmohan Singh. Yes, he did not ask for apology from Rahul Gandhi nor did he resign. Indian politicians are a different kind of species! Jai Hind.