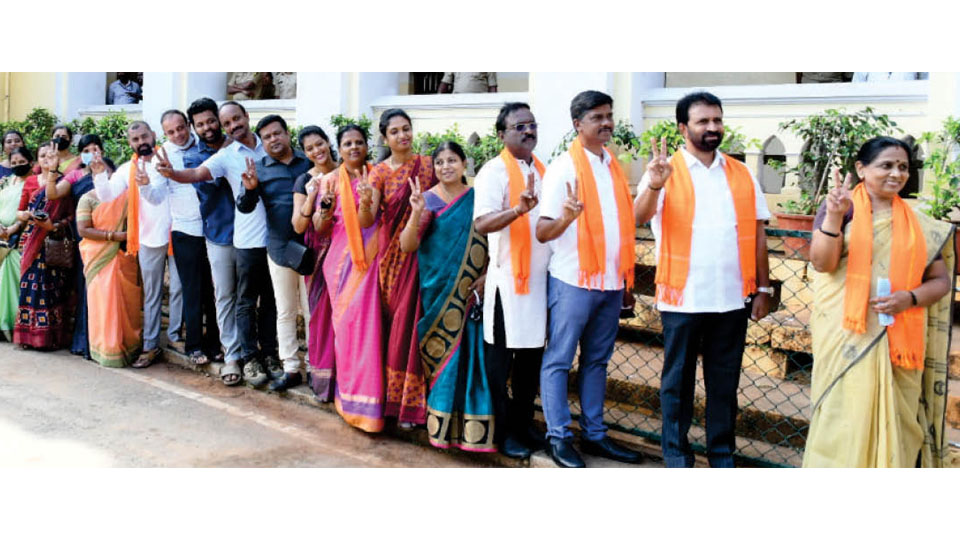 Mysore/Mysuru: The voting for the Legislative Council polls (MLC polls) for the dual-member Mysuru- Chamarajanagar seats began on a moderate note across Mysuru and Chamarajanagar districts this morning.

The biennial elections to 25 Legislative Council seats from the Local Authorities’ Constituencies in the State, whose term comes to an end in January 2022, is  being held across the State today.

In Mysuru, the term of sitting members Sandesh Nagaraj, who was elected on a JD(S) ticket and R. Dharmasena of the Congress, will end on Jan. 5, 2022.

As the polling began at 8 am, a few voters, most of whom are Gram Panchayat (GP) members, turned up at the polling booths to exercise their franchise. Elected Members of Parliament, Members of the Legislative Assembly and Council, sitting Members of Urban Local Bodies (ULBs) including City Corporations, CMCs, TMCs, TPs and GPs form the electorate.

Mysuru-Kodagu MP Pratap Simha cast his ballot at a polling booth at Madikeri.

The dual-member Mysuru-Chamarajanagar seat has an electoral strength of 6,771 voters, with Mysuru having 4,502 and Chamarajanagar 2,269 voters. Women voters outnumbered men as 2,329 of the 4,502 voters in Mysuru district are women and 2,172 men. The same is the case with Chamarajanagar, where women voters  are 1,187 as compared to 1,082 men voters.

There are a total of seven candidates in the fray for Mysuru-Chamarajangar seat.

The candidates are Raghu R. Kautilya of BJP, Dr. D. Thimmaiah of the Congress, C.N. Manjegowda of the JD(S), Vatal Nagaraj of Kannada Chaluvali Vatal Paksha and Gurulingaiah, K.C. Basavarajaswamy and R. Manjunath, all independents.

This  election is of preferential pattern, in which the voters  are required to mark their ballots in order of preference on the choice of their candidates for the 2-member seat. GP members, who form a majority of the electorate, were seen taking their own time at many booths to exercise franchise as they sought to create a ‘demand’ of sorts for themselves in order to cast the second preferential vote.

Though voting began on a moderate note, it picked up momentum as hours passed by with Mysuru district recording a poll percentage of about 34 percent and Chamarajanagar about 46 percent at 12 noon. Voting concludes at 4 pm after which ballot boxes will be moved to Maharani’s Commerce and Management College for Women at Paduvarahalli in city, where they will be kept in safe custody. Counting of votes will be taken up on Dec.14. Results will be announced the same day. In the State, the election is being held for 25 seats, with BJP and Congress contesting 20 seats each, JD-S 6 seats.