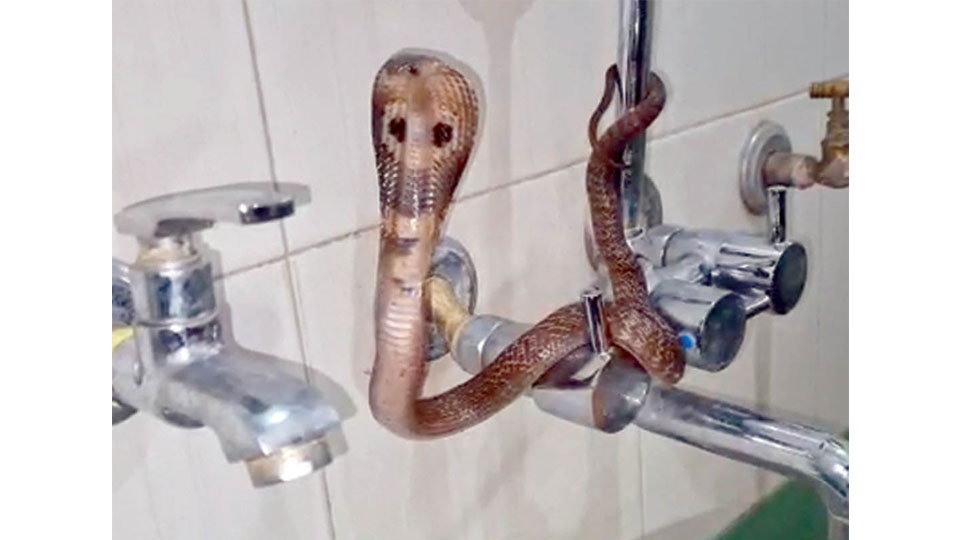 Mysore/Mysuru: A Spectacled Cobra that had entered into the bathroom of a house at Srirampura here on the day of Shasti yesterday has been rescued by snake rescuer Surya Keerthi.

One of the woman family members of the house, who saw the snake entering the house screamed for help and the snake entered the bathroom. They closed the door of the bathroom and immediately called Surya Keerthi, son of city’s well- known snake rescuer and wildlife conservationist Snake Shyam over the phone.

Surya, who rushed to the house, entered the bathroom only to find the snake coiled around on the tap and rescued it. He then put the snake in a container to release it in its natural habitat.

Do not pour milk into anthills

Surya said that on the day of Shasti, devotees offer fruits, decorate anthills with flowers, smear kumkum and turmeric, pour milk into the anthills, light camphor and perform puja, which is a tradition that has been followed from ages.

“It is not wrong to display devotion, but the puja should not harm the snake for which devotees pray for. Snakes do not eat fruits or drink milk, they hunt frogs, lizards, small reptiles and eat them, which is scientifically proven,” he said.

He further said that when milk is poured into anthills, milk mixed with kumkum and turmeric enters into the anthill and slush is formed inside. When snakes enter these anthills to cool themselves, the slush enters their nostrils and get hardened which may result in their deaths. He urged the people not to harm snakes but inform him when they spot one, so that it can be rescued and relocated to its natural habitat.