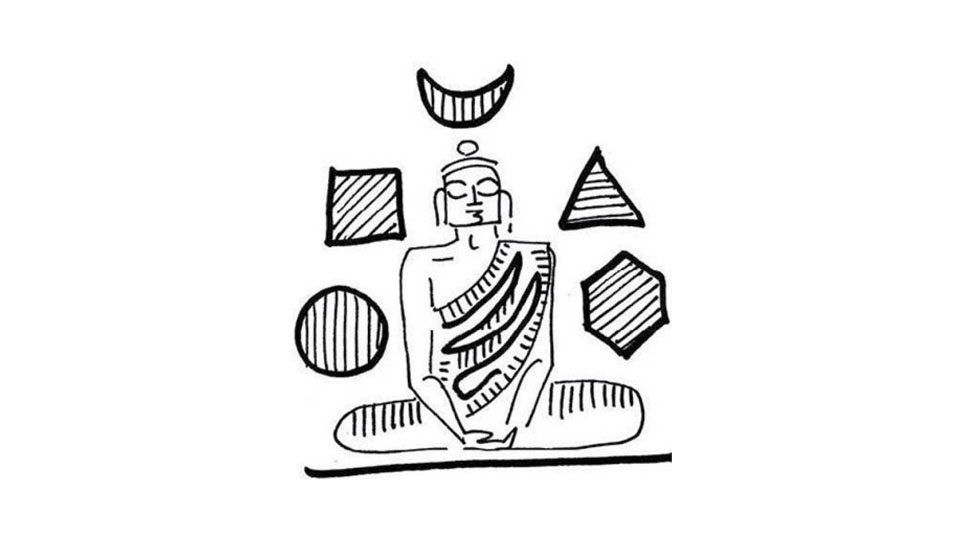 In the Buddhist worldview, the fundamental elements of the world are: Earth, Fire, Water, Wind and ‘Aakash’ or Space and what we nowadays refer to as radiation. In Japan when a person dies, the grave is often marked by a tombstone which has five symbols — square for the earth, circle for water, triangle for fire, crescent for the wind and an octagon or an almond shaped crown to represent space. This is the Buddhist equivalent of the Christian concept: you are dust, and you return to dust.

When these five elements (or rather unseen energies) come together they form particles known as ‘parmanu’. These particles again join together and form aggregates called ‘anu’ and these aggregates keep forming until they can be perceived by sense organs. In fact, the sense organs are also formed by such aggregations.

Once sense organs are formed and they perceive the world around, it gives rise to sensations. Sensations gives rise to various feelings like happiness and sorrow, which then give rise to constructs such as hatred, jealousy, love, ambition. These, in turn, finally give rise to what is called consciousness. So, it is a series of what is called a dependent origination. Nothing exists autonomously, everything depends on something else.

In other words, the Hindu concept of ‘swayambhu’ — self created is in a way rejected by the Buddhists who say that everything depends on something else. Hindus see these five elements (Maha-bhutas) as distinct from the atma. Presence of atma transforms an inanimate object (ajiva) into an animate organism (jiva).

Besides this doctrinal differences, there are also many iconographic and ritual differences between Buddhism and Hinduism. For example, in Buddhism, the Buddha is often shown with his eyes shut unless he is a Bodhisattva whose eyes are partially open looking down at you. On the other hand, in Hinduism, the Gods have large unblinking eyes where they are doing darshan. Buddhism, thus, prefers the inward gaze over the outward one. In terms of ritual practices, Buddhism favours monasticism while Hinduism favours the married life. Even the Hindu Gods are married in temple ceremonies.

However, when Buddhism went out of India it left a part of itself in India in the form of monastic traditions. Hinduism always had individual monks who went away from society or community or the villages or the family. Around 800 to 1000 AD, the time when Buddhism slowly disappeared from India, Hindus adopted the practice of institutional monasticism which was called the ‘mathas’ or the ‘akhadas’. Legend has it that these were started by Adi Shankaracharya, who was accused of being a crypto-Buddhist. Monasticism and meditation now plays a very central role in Hinduism. But while Buddhist monasticism and meditation is all about discovering dependent origination from the five elements, and the absence of atma, Hindu monasticism and meditation is all about discovering the mortality of the flesh, and the immortality of the atma.