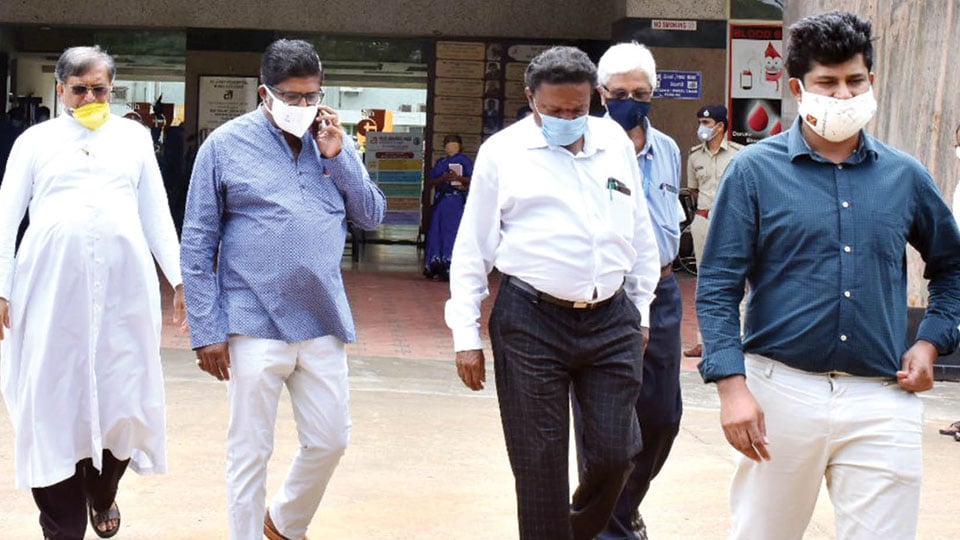 Mysore/Mysuru: District Minister S.T. Somashekar yesterday said that a COVID-19 Task Force will be set up for each of the four Assembly segments of the city, namely Chamaraja, Krishnaraja, Narasimharaja and   Chamundeshwari.

He was speaking to press persons after holding a review meeting on COVID-19 measures at the ZP Office here on Sunday.

Pointing  out that the Task Force will  be headed by the MLA of the respective Assembly segment, Somashekar said that, however, in case of Narasimharaja Constituency, Mysuru-Kodagu MP Pratap Simha will head the Task Force as the MLA is not keeping well.

The Chamaraja Task Force will be headed by L. Nagendra while Krishnaraja by S.A. Ramdas and Chamundeshwari by G.T. Devegowda.

Stating that he has directed the officials to print pamphlets containing vital information such as whom should be contacted in case of cold and cough, which hospital to visit, which official to be contacted, who is the Nodal Officer, who is the Health Officer and the like, along with the Mobile Number of officers, he said these pamphlets should be distributed to every household in all Assembly segments.

Continuing, Somashekar said that a Medical Officer will be posted as In-charge of each of the Assembly segment.

Noting that a separate team headed by MP Pratap Simha and consisting of officials will be in-charge of N.R.  Assembly segment, which has most number of positive cases, he said that an Assistant Commissioner will be put in charge to ensure that no lapses occur in shifting of positive patients to Hospitals. The Deputy Commissioner will oversee the functioning of officials, he added.

No delay in handing over bodies

Referring to complaints regarding the delay in handing over of bodies, the Minister said that the DC has informed that this is due to shortage of D-Group employees. Maintaining that the issue has been discussed with the Chief Minister, Somashekar said he has instructed the officials not to wait for Lab reports and take measures to hand over the bodies to families immediately. The officials must also ensure that there is no delay in issuance of death certificates, he added.

When a Hospital Doctor brought to the notice of the Minister that the Hospital lacked ventilators and was short of Nurses, Somashekar instructed the authorities to convince the Nurses who have left service, to return or to appoint New Nurses by paying them more.

Deputy Commissioner Abhiram G.Sankar said that the district administration has launched many initiatives for containing the spread of the deadly COVID-19 pandemic. Maintaining that measures have been taken for proper Ambulance service in all the Assembly segments, he said that the vehicle service will be segment-specific in nature in the coming days.

Noting that 18 out of the 32 COVID-19 suspects in N.R. Mohalla tested positive for the virus, the DC said that such tests will be conducted in other parts of the city as well.

READ ALSO  COVID test to be made mandatory for tourists: Minister Dr. Sudhakar

Rapid Antigen Tests will be conducted only during emergencies as such tests are sometimes found lacking in clarity, he added.

MP Pratap Simha opined that COVID-19 deaths may also be due to co-morbidities.

Pointing out that deaths will also occur due to various other ailments, he said that everyone, including the media should take note of this fact. The MP sought the DC to create COVID-19 awareness through autorickshaw announcements along with distribution of   pamphlets.

Reacting to this, Somashekar said that apart from augmenting Ambulance service, it is important to reserve exclusive rooms for Drivers and other Ambulance staff. Also arrangements must be made for the Ambulance personnel to take bath and change PPE Kit after shifting of every patient, he added.

Replying to a query, the Minister said that he has ordered the officials to seal down only the house or the street from where a positive case is reported.

The Minister later inspected the Tree Park and the foot of Chamundi Hill, where planting of one lakh tree sapling programme is scheduled to be launched on July 28.