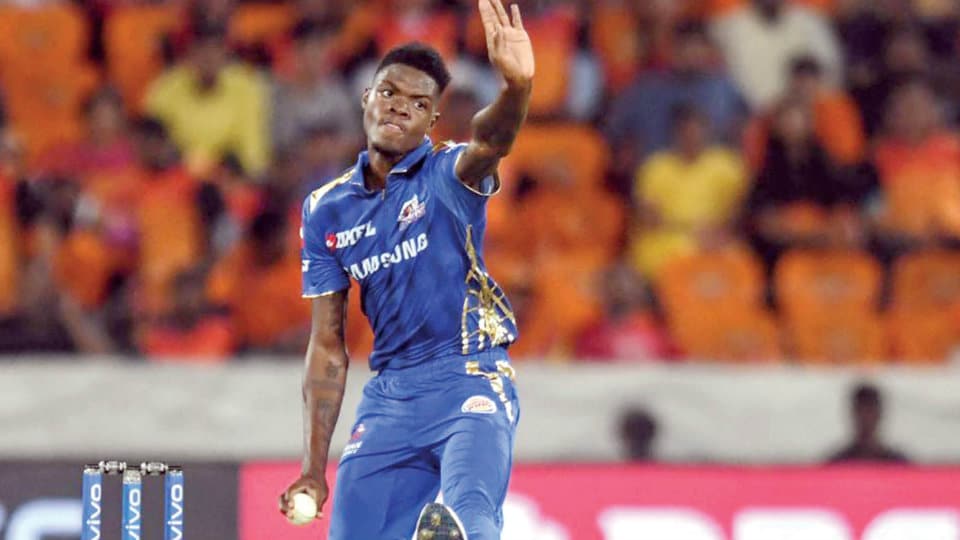 Alzarri Joseph made an impressive debut in the IPL as he picked up a tournament best figures of 6/12 as Mumbai Indians (MI) registered a 40-run win over Sunrisers Hyderabad (SRH) yesterday.

Earlier, another Windies cricketer Kieron Pollard’s breathtaking cameo powered Mumbai to a respectable 136 for seven in 20 overs. Pollard smashed an unbeaten knock of 46 runs off 26 balls with the help of two boundaries and four sixes.

Fast bowler Siddarth Kaul was the wrecker-in-chief for Hyderabad as he claimed two big wickets. Bhuvneshwar Kumar, Sandeep Sharma, Mohammad Nabi and Rashid Khan chipped in with a wicket each as Hyderabad kept Mumbai under control.

Chasing a small total, Hyderabad were all out for 96 in 17.4 overs. It was the third win for MI in five games while SRH suffered their second loss in five matches.
Alzarri Joseph was chosen as the Man of the Match.

CSK posted a total of 160/3 in their stipulated 20 overs. CSK captain M.S. Dhoni won the toss and chose to bat first.

Openers Shane Watson and Faf du Plessis gave the home team a good start. However, KXIP spinners — with Ravichandran Ashwin being the destructor-in-chief — bogged down the scoring rate in the middle overs.

Dhoni came up with a good finish at the end, however, as 44 runs were scored off the final three overs to get the score up to 160.

The KXIP innings got off to a rocky start, with Harbhajan Singh capturing the wickets of Chris Gayle and Mayank Agarwal in the same over.

K.L. Rahul and Sarfaraz Khan consolidate in the middle part of the innings but ran out of ideas as the spinners choked the scoring rate.
With this, CSK have 8 points from 5 matches and KXIP continue to have 6 points, also having played 5 matches

Harbhajan Singh was chosen as the Man of the Match.

The 22-year-old from Antigua claimed 6 wickets for 12 runs in 3.4 overs to better Sohail Tanvir’s record of 6/14 for Rajasthan Royals in the IPL’s inaugural edition in 2008.

Alzarri Joseph annihilated Sunrisers Hyderabad batsmen as he became the second man to take a five-wicket haul on IPL debut.

MI had roped in Alzarri Joseph, who has 25 Test wickets and 24 ODI scalps to his name, as a replacement for an injured Adam Milne.