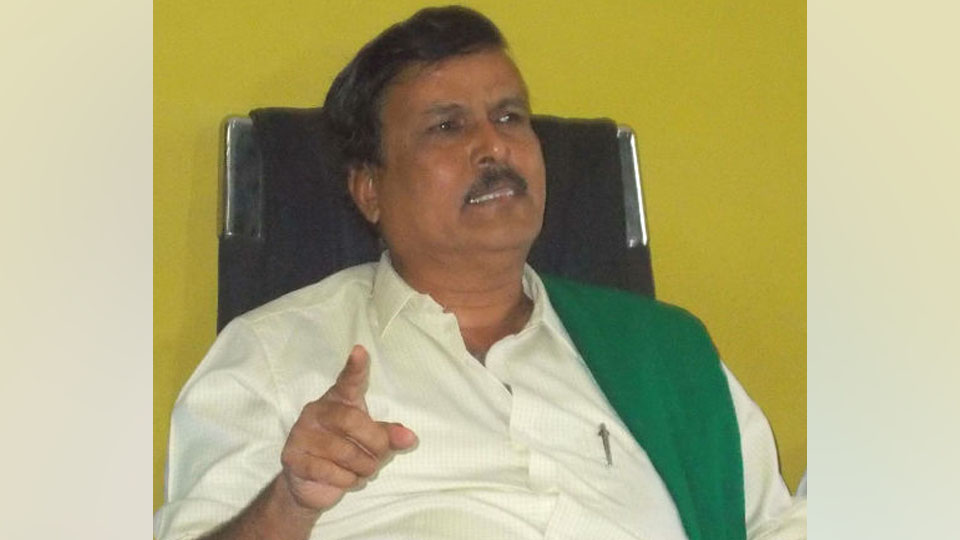 Mysore/Mysuru: Strongly condemning the amendments to APMC Act and Karnataka Land Reforms Act and the moves to privatise the Power sector, farmers under the banner of Karnataka Rajya Raitha Virodhi Kaide Horata Samithi (Karnataka State Action Committee against  Anti-farmer Amendments to Acts), will gherao District In-Charge Ministers across the State starting from tomorrow.

Announcing this at a press meet at Jaladarshini Guest House here this morning, Karnataka State Sugarcane Growers Association President Kurubur Shanthakumar, who is also the Chief Convener of the Samithi, said that as a first step of the Statewide protest against the Government’s decision to amend the APMC and Karnataka Land Reforms Acts and the move to stop free power supply to Irrigation Pumpsets of farmers by privatising the Power sector, the farmers will gherao all District Ministers of the State at their respective headquarters from tomorrow (June23).

As a next step, the farmers will register their protest against the Government’s anti-farmer policies by staging massive demonstrations in front of the houses or offices of all Legislators of the State on June 24. Also demonstrations will be staged in front of all the Deputy Commissioners Offices in the State on June 29 and subsequently, the farmers will lay siege to the residence of the Chief Minister at Bengaluru on a later date, he said.

Accusing the Government of turning to false propaganda in respect of amendments to the Acts, Shanthakumar maintained that the amendments to the two important Acts and the Power sector privatisation moves were totally against the farming community. He urged the Government to revoke its actions in the better interests of the farmers, who are considered as the backbone of the country.