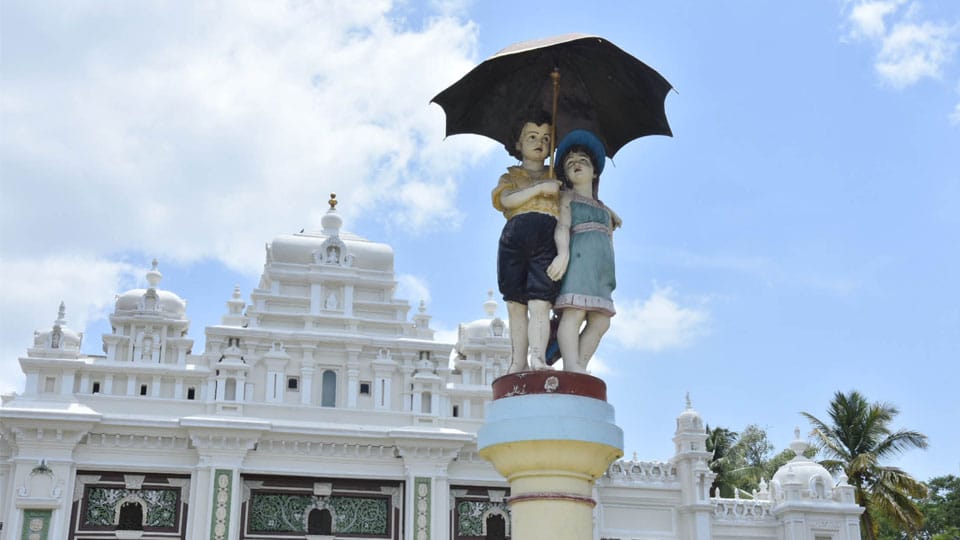 Mysore: Hundreds of thousands of visitors and tourists throng the 158-year-old Jaganmohan Palace in city every day. But either in the rush or due to lack of knowledge, hardly anyone gives a second look at the fountain with statues of two children, a boy and a girl, very European-looking.

However, during one of his frequent visits to Jaganmohan Palace auditorium, this beautiful statue of the children caught the eyes of Star of Mysore Photographer, when he had just finished taking the photograph of the silhouetted Palace with the background of the setting sun in the evening sky.

What is the history behind this statue? Star of Mysore dwelled a little deeply only to find that there is hardly any information on how and why the statue, which also used to have a fountain, was installed.

Sources in the Jaganmohan Palace said that the statue could have been installed during the time of Nalwadi Krishnaraja Wadiyar. It is made of metal with a cement pedestal. The boy is holding the umbrella over the head of both him and the girl, while the girl is holding a folded umbrella behind her.

It is said that the there was a fountain and the water sprang from the tip of the umbrella in a fountain form and flow back into the pond. “Those days there was no motor to pump the water. Since the Palace had connection for water supply, the water flowed throughout the day through the centrifugal force and as a result the fountain was always working. There was a valve to stop the water flowing. The whole place was cordoned off earlier by a fence. But now it is removed and one can have a close look at the figurines,” said the source.

However, the statue is not in a good condition as cracks have developed. Just like Jayachamarajendra Art Gallery is being restored by HH Srikantanadatta Narasimharaja Wadiyar Foundation, it is hoped that this statue and the fountain will also get a facelift and be restored to its past glory.