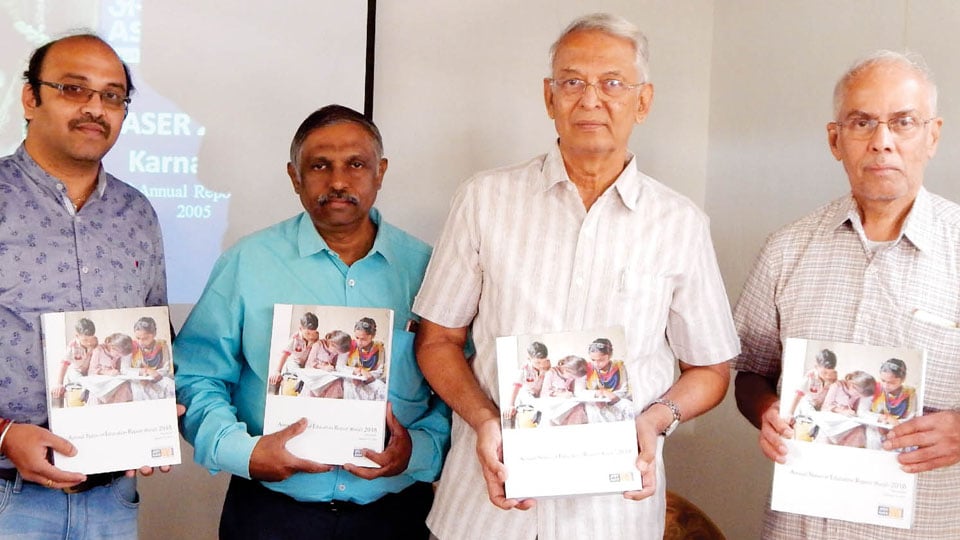 The 13th Annual Status Education Report (ASER-2018) of Karnataka State was released recently in Mysuru by Ashvini Ranjan, Managing Trustee, Pratham Mysore. Facilitated by Pratham, ASER is carried out by volunteers from local partner organisations in each rural district. Every year, ASER finds out whether children in rural India go to school, whether they can read simple text and whether they can do basic arithmetic.

In 2005, 2007 and every year since 2009, ASER has also included a visit to one government school in each sampled village. Since the implementation of the Right To Education Act (RTE Act) in 2010, school visits in ASER have included indicators of compliance with those norms and standards specified in the RTE Act that are easy to measure.

ASER-2018 survey was carried out by around 27 partner organisations and over 1,200 volunteers reached 30 districts across Karnataka. A total of 17,999 households and 29,312 children in the age group 3 to 16 were surveyed.

Following are the key findings from ASER Report (Rural) 2018 for the State of Karnataka:

Reading: The ASER reading test assesses whether a child can read letters, words, a simple paragraph at Std. I level of difficulty, or a story at Std. II level of difficulty. The test is administered one on one to all children in the age group of 5 to 16 and the child is marked at the highest level that she or he can reach.

READ ALSO  Does Mysuru need an NGO platform like the one provided by MGP ?

Std. VIII: ASER-2018 data indicates that of all children enrolled in Std. VIII in Karnataka, about 70% can read at least a Std. II level text. This number is unchanged from 2016.

Arithmetic: The ASER arithmetic test assesses whether a child can recognise numbers from 1 to 9, recognise numbers from 10 to 99, do a 2-digit numerical subtraction problem with borrowing, or correctly solve a numerical division problem (3 digit by 1-digit). The tasks are administered one on one to all children in the age group of 5 to 16 and the child is marked at the highest level that she or he can reach.

Std. V: The proportion of children in Std. V, who are able to do division has increased slightly from 19.7% in 2016 to 20.5% in 2018. It is heartening to note that there is larger improvement among government school children (2.4 percentage increase from 2016) as compared to private schools.

In ASER-2018, children in the age group 14 to 16 were given a few tasks which required calculations to be done in everyday contexts. Children were asked to calculate time, compute how many tablets would be required to purify water (application of unitary method), figure out where to buy books given two different price lists (financial decision-making), and compute a discount. Each of these tasks was done one on one. Results are reported for those children in this age group who could do at least subtraction correctly.

READ ALSO  Can a Consumer Court complaint be filed in a plain sheet of paper?

In ASER-2018, children in the age group of 14 to 16 were given a few tasks which required calculations to be done in everyday contexts. Such as calculating time, application of unitary method, financial decision making etc.

Of the 14-16-year-olds who could solve a numerical division problem, 45.7% could compute the time question correctly, 47.5% could apply the unitary method to calculate how many tablets were needed to purify a given volume of water, about 39.0% were able to take the correct decision regarding the purchase of books, and less than 25.5% could compute the discount correctly.

Following school observations were made during the visit:

• The RTE Act was implemented in 2010 and the first cohort of students to benefit from its provisions completed 8 years of compulsory schooling in 2018. In Karnataka, as well as nationally substantial improvements are visible over this 8-year period in the availability of many school facilities mandated by RTE. The % of schools with useable girls’ toilets has doubled from 2010, reaching to 66.4% in 2018. Whereas, the proportion of schools with availability of drinking water has only slightly increased from 75.8% to 76.8%.

• In 2018, about 9 out of 10 schools had a playground available for students, either within the school premises or close by. Playgrounds were accessible in around 90% of schools in the State.