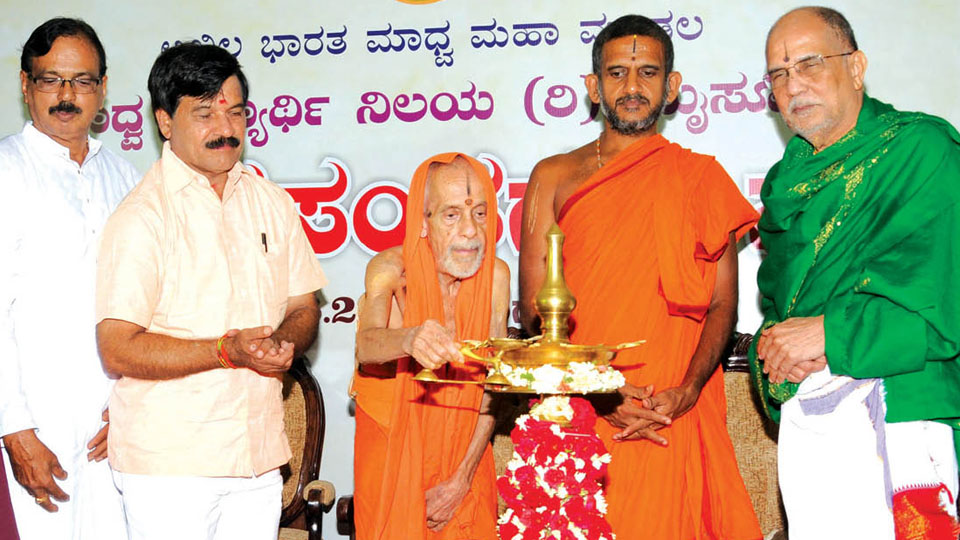 In a hurriedly convened press conference on the sidelines of the 60th anniversary celebrations of Akhila Bharata Madhwa Maha Mandal at K.R. Vanam Madhwa Students Hostel in city, the Seer said, “My comments were wrongly understood.”

The Seer had recently said in Udupi that Modi had not fulfilled some of the promises he had made before assuming office. “There were many other things that needed to be done before building the Ram temple at Ayodhya. The country has to see progress in agriculture and finance, and the Ganga needs to be cleaned. There have been achievements by Modi government, but there are some promises which have not been fulfilled yet.  They had promised to bring back black money (hoarded abroad) and to clean the Ganga. But these have not been done. But I agree that the government has succeeded somewhat where the country’s economy is concerned,” the Seer had stated.

Clarifying on his statements yesterday, the Seer said, “I had just mentioned about the progress not matching expectations with regard to cleaning of Ganga and bringing back black money stashed abroad. It was my disappointment at personal level, but not to berate the Centre.”

He said that due to bad acoustics at the event in Udupi many people could not hear clearly what he said. “My statement had triggered a new debate and hence had to make it clear. However, there was no pressure on me to clarify. The news published and telecast through media would have sent a wrong message to society and I felt it must be clarified,” he added.

Steering clear of any controversies, the Seer said that he was not in favour of any party or an individual. “I have a habit of advising governments irrespective of political parties. Similarly, I have advised the Central government. I have told him (Modi) that the progress with regard to two prominent issues (Ganga and black money) is below expectation level. However, Modi is doing well,” the Seer said.

On the JD(S)-Congress government in Karnataka, the Pejawar Seer said that he was unhappy with the recent attempts at horse-trading and “resort politics” that followed. “Only when all the three parties (Congress, BJP and JD-S) come together to form a government there would not be any fear of instability. Now, the fear of ‘resort politics’ still hangs over MLAs,” he said.