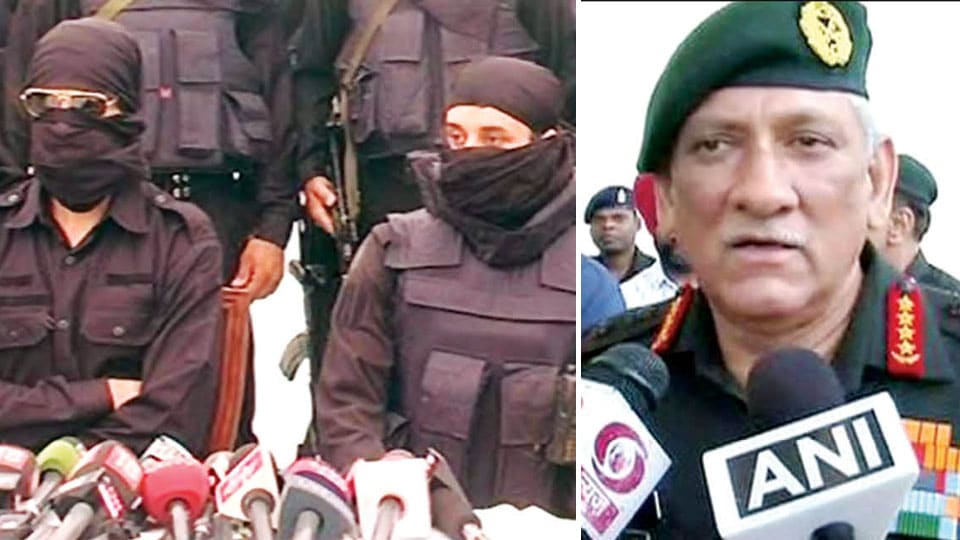 In the last few years, Army Chiefs and senior security personnel have met the Press and spoken quite candidly. And that interaction has dragged them into a public debate, interpretation and criticism which has become political fodder.

Recently, the first Chief of Defence Staff General Bipin Rawat said, de-radicalisation camps are operating in the country and it was necessary to isolate people who are completely radicalised.

It may be a factual statement, but does the public need to know this from the Chief of the Defence Staff? Sure enough the AIMIM (All India Majlis-e-Ittehad-ul-Muslimeen) Chief Asaduddin Owaisi picked on it and asked who would de-radicalise the lynchers. And now, just like that, the Chief of Defence Staff has been dragged into politics.

Last month just before his retirement, General Rawat had criticised the anti-CAA protests and said that leadership was not about guiding masses, including students, to carry out arson and violence. Now, does an Army Chief need to get into such a hot political issue? And sure enough the former Finance Minister P. Chidambaram picked on it and said, “Let me appeal to General Rawat. You head the Army and mind your business. It is not the business of the Army to tell politicians what we should do. Just as it is not our business to tell you how to fight a war, you fight war according to your ideas and we will manage the politics of the country.” Did an Army Chief need this gyaan from a politician?

In May last year, former Admiral Laxminarayan Ramdas wrote to the Election Commission asking it to “Ensure that Armed Forces are not used for political gains.” He is correct in his request.  But if the Armed Forces are not to be politicised, like he says, then Army men should stay away from politics. So why did he join Aam Aadmi Party (AAP), only to be later unceremoniously discharged?

There is something reverential about the Armed Forces and the more they expose themselves to the media the more they are in danger of losing that reverence. This reminds me of what I saw in 2008 after the terror attack at Taj Hotel in Mumbai.

The Black Cat Commandos have always been mysterious. They are to me like the fabled Ninjas. They come, do their job and disappear. They don’t stand around waiting to be applauded and accorded honours. But all this mystery to me disappeared when I saw the Black Cats address a press conference.

I always wanted to believe that the elite force was above all this media circus. I was disappointed to see a Commando Chief — half-wrapped in a translucent scarf with tacky sunglass — addressing a press conference and answering questions directly asked by the media persons. He also had another masked junior with him. This may be applauded as Indian transparency but it showcased lack of professionalism.

The very reason they are expected to wear a mask is to remain unrecognisable. They have to remain a mystery, remain super heroes who stoop down to save the day and disappear only to save us again another day. But on that day, they stayed and surrounded themselves with media chaos.

Generally, a media coordinator takes questions of press persons during a crisis. The media co-ordinator and his team first meet the Commandos and discuss what questions they must address and how it must be addressed; how much information must be given out and how it must be given out. Only after this, does the media co-ordinator come out and interact with the media.  But in this case, the masked heroes came out and were engulfed in media chaos.

When Army and Special Forces interact with the media, it will not make them transparent. It will only make them open to judgement and criticism, which could affect the moral of the Forces.

For long now other officers of the Government have found refuge in politics post-retirement, now one feels the same is happening to the Army Officers. We have two examples from two ends of the rank spectrum: General V.K. Singh, the former Chief of Indian Army joined BJP soon after retirement and Jawan Tej Bahadur Yadav, the dismissed BSF Constable of ‘Bad Army Food’ video fame was given Samajwadi Party ticket for Varanasi.

That is why the Election Commission in 2012 recommended to the then UPA Government that recently retired or resigned IAS, IPS and All-India Services Officers be kept away from electoral politics for two years. The logic being that the unpredictability of a political future will keep them impartial to a certain extent while in service. The Government rejected the proposal as it could violate their right to equality enshrined in the Constitution.

Now, when an IPS Officer, an IAS Officer, an IFS Officer or any Officer of the other services joins politics, the damage to the public psyche is not much because — let us face it — while the Police and bureaucracy are feared, they are not respected. People don’t expect any better from them than they expect from a politician. But the Armed Forces are not just respected but revered. There is confidence that even if the Police, bureaucracy and political class fail us, Armed Forces never will. They fight for the nation, for its people and not for a party. But as more and more Army men give press statements and get dragged into the public-political domain, they are in danger of damaging this sacred status.

Indeed we may not be able to stop Army men from entering politics but we sure can stop senior Army Officers and Special Forces from interacting with the media beyond the brief. Armed Forces should stay at arms distance from media, politics, politicians and political parties. After all, the distance between the Army and politics is what keeps our democracy healthy. When Army and politics merge, you get Pakistan and no one wants that.