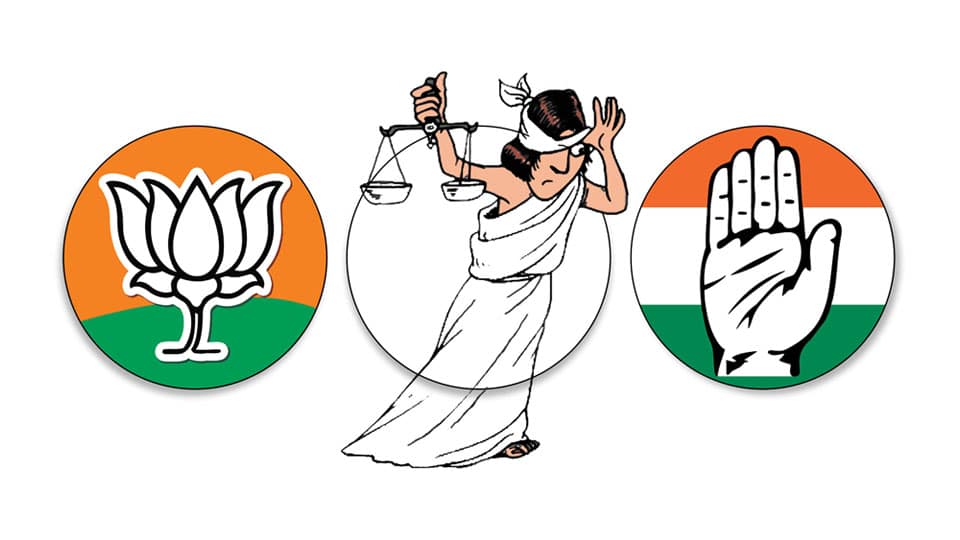 Two days ago, the Supreme Court heard a plea challenging the Constitutionality of the Sedition Law (IPC Section 124A). It was a proud moment for us as Mysureans because the challenge came from Major General S.G. Vombatkere (retd.), a resident of Mysuru.

While hearing the plea, Chief Justice of India, Justice N.V. Ramana, asked Attorney General K.K. Venugopal, “It is a colonial law and was used by British to suppress freedoms…is this law still needed after 75 years of Independence?”

Soon the campaign to scrap this repressive law began and Congress party leaders were vociferous.

Senior Congress leader Mani Shankar Aiyar, writing in the ‘The Week’ magazine about the misuse of Sedition Law by the BJP, said in a tone of shock, “The Narendra Modi cohort has invoked this charge 96 times in 2019 alone!”

Yes, it is indeed shocking. But you know what is truly shocking? In 2012, the Congress Government booked 9,000 sedition cases in one incident alone!

In 2012, there was agitation against the nuclear power plant at Koodankulam in Tamil Nadu and sedition charges were slapped against 9,000 protestors for “waging war against the Government of India.”

In 2019, when sedition charges were filed against JNU students, Congress leader Chidambaram called for a debate on “Whether a provision like IPC Section 124A  (sedition) has a place in the laws of a democratic republic.”  Makes us wonder, why he didn’t do anything about it when he was the Home Minister and his Government was in power for a decade?

On the same issue Congress leader Kapil Sibal wanted the Sedition Law scrapped because, as he put it, “Those in power are manipulating it, and there is no need for a Sedition Law in today’s times…” But what was he doing when he was the Law Minister and in that time his Government ruled for 10 long years?

Now, Mani Shankar Aiyar says, “It is high time Section 124A was repealed.” Well, we must ask all the Congress leaders who are vociferous now, what were you people doing when you had all the time to do it…52 years of it?

READ ALSO  Yogi Adityanath sworn in as UP CM

The irony is this. Now archaic laws are being scrapped and progressive laws are being passed by a BJP Government that many liberals have labelled as “extremist”, “regressive” and “patriarchal” !

The BJP Government took the Ordinance route in the matter of Triple Talaq and had Section 377, a law discriminatory towards homosexuals, scraped. Why couldn’t the so-called “liberal” Congress scrap these laws in the 52 years they had?

Surprisingly, no praise came when the BJP Government repealed the Dramatic Performances Act, 1876, an Act that concerns the most vociferous opponents of BJP, the artsy-liberals.

This Act implemented by the British to stop artistes from using theatre as a tool of protest against colonial rule was till recently cited by Indian Police to stop street theatre shows!

Now that the law is gone, artistes are free to perform wherever they want after taking permission. Did any of the “award returnees” hail scrapping of this law? Sadly, they did not even question why the so-called “liberal” Congress did not scrap it in 52 years.

Later, Supreme Court scrapped Section 497 which treated women as “chattel” and criminalised consensual sex between adults. Why didn’t the so-called “just” Congress do this in their time?

Of course, the Supreme Court did what the Parliament should have done. But the BJP Government played it smart. It didn’t want to lose its “conservative” vote base so it conveniently left it to the wisdom of the Courts.

While a right wing BJP had to take this “Supreme Court” route to push progressive laws without affecting some of its fanatic vote base, why didn’t Congress party that didn’t have this problem —  after all, it is in tune with their ideology — scrap these laws which were also Human Rights violations?

The answer is simple. Congress also practices  “appeasement” politics. It didn’t want to upset its conservative male voter base. Let it be.

Now, along with Sedition Law there are other illogical laws that have to be repealed. Such as Telegraph Wires (Unlawful Possession) Act, 1950. But the last telegram sent in India was on July 14, 2013 after which it was stopped. So this law is redundant !

Then we have the Indian Treasure Trove Act, 1878 which means if you find anything more than Rs. 10 lying on your land and if it is not yours, you better inform the Revenue Officer else you are going to jail!

The most interesting is the Salt Cess Act, 1953. This Act levies a tax on salt. And when you have an Act you need someone to manage it. So we have a branch of Civil Service called Indian Salt Services ! In 2016-17, it collected Rs. 3.53 crore in taxes but the Government spent Rs. 30 crore to run the Salt Department ! The Department has 11 Indian Salt Service Officers selected from the Union Public Service Commission (UPSC) and nearly 700 support staff !

No wonder, Prime Minister Narendra Modi, during his 2014 election campaign, had said that he would repeal 10 archaic laws for every law his Government makes. And on 11th August 2014, two months after he was sworn-in, ‘The Repealing and Amending Bill, 2014’ was introduced in the Lok Sabha by the then Minister of Law and Justice, Ravi Shankar Prasad.

The Congress leaders must acknowledge the fact that in the last the 60 years, just 1,301 laws were declared obsolete while in the last 7 years more than 1,200 Acts have been repealed. Next another 1,824 such laws are being scrutinised, let us hope sedition is one among them.

Also, while the Chief Justice of India asks “Do we need this law?” The answer is, may be not in its current form. Instead, tweaking it would be better considering the mindless anti-India rhetoric and protests that could be initiated from hostile neighbours within India to create civil unrest.

For now, may be, by passing a less harsh Sedition Law the BJP might be able to garner consensus for birthing a new one  — Uniform Civil Code — One People, One Nation, One Law.

4 COMMENTS ON THIS POST To “Old Laws and Congress Party”