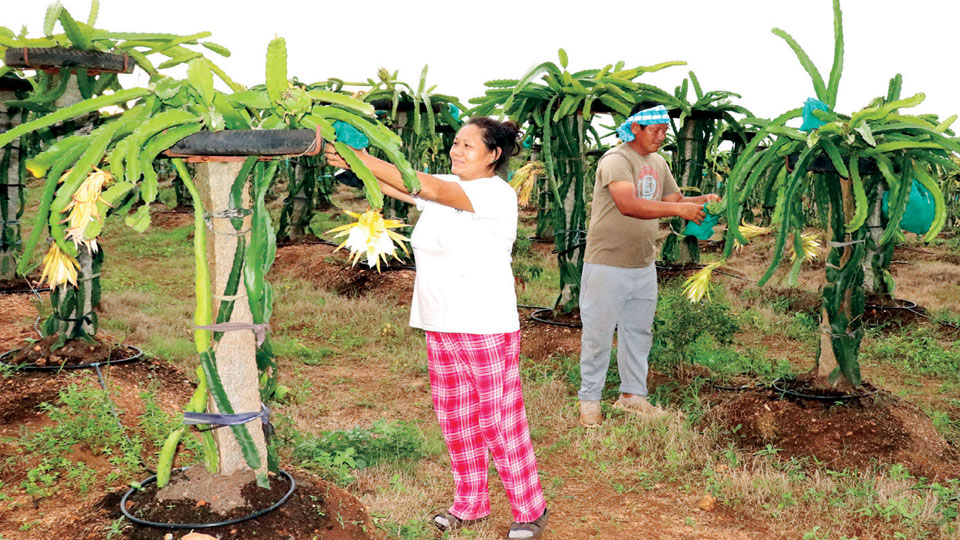 Many people find no ideas to utilise their retirement life and while away days doing nothing. But Jampa Sangyal, a resident of Gurupura near Hunsur, a retired Indian Armyman, is cultivating dragon fruit organically.

He started dragon fruit cultivation in the fallow land near CSD-Gurupura School and invested money in the idea that is considered to be rare to this region. Pouring sweat in the soil makes your body healthy and also that you get income from farming. Doing something and making income after retirement adds to your joy, he told Star of Mysore.

He evinced interest in dragon fruit farming after he learnt ideas about the farming from various sources including online and through consultation with fellow growers. He learnt that the dragon fruit could be cultivated in a land where irrigation facilities are not so good. Gurupura is an arid land and there is not much rain here.

The dragon fruit (Hylocereus undatus) is indigenous to the Americas. It grows on the Hylocereus cactus also known as Honolulu Queen, whose flowers only open at night. The plant is native to Southern Mexico and Central America. It goes by many names like Pitaya, Pitahaya and Strawberry Pear.

Its name comes from its appearance — leather-like skin and scaly spikes on the exterior of the fruits. It was introduced to home gardens in India in the 1990s and it gained wider popularity among farmers due to its profitability and the fact that it needed lower inputs once established.

The plant sustains yield for more than 20 years and is high in nutraceutical properties and good for value-added processing industries. The low maintenance and high profitability of dragon fruits has attracted the farming community throughout India.

Jampa Sangyal owns three acres of land and he grows over 35 quintals of the fruit.  He has designed his farm scientifically with stone poles where four saplings are planted. A discarded rubber tyre acts as a grip to the plants. The gap between each pole is 8 feet.

He maintains his farm organically with waste like jaggery manufacturing residue and other organic manure. He guards his farm from raiding elephants and pigs as if he is at the country’s border. He does not employ any labourers and he is assisted by his wife Tsesung Lhamo.

He retired from the Indian army on March 21, 2012 after serving for 21 years from 1991. “My red dragon fruits are tastier than normal white ones available in the market. Buyers and middlemen ask the fruit for dirt cheap rate. The organic fruits grown here do not fetch much but sadly, the inorganic and imported dragon fruits are in demand,” Jampa Sangyal lamented.

Almost every type of soil can hold a dragon fruit plant. However, sandy soil and good irrigation are preferred. Jampa Sangyal has just studied till 3rd standard at his native CSD-Gurupura School.

He learnt about fruit cultivation through online videos. “My friends and community members turned away when I asked for help. But I have inspired many and they have taken up fruit cultivation now. I have raised this farm with whatever little I learnt. Many school children come here to see the plants and fruits. I give them fruits free of cost and I love children as they are our future citizens.”

Not deterred by lack of market for his dragon fruits, Jampa Sangyal wants to plant olives. “What is wrong in trying? I will be busy till my last breath,” he said.

Jampa Sangyal has served the Army in Ladakh, Assam, Kargil, Batalik and the Line of Control. “I have a great respect towards my motherland. My wife was tortured in her childhood by the Chinese and she ran away from her place, crossed the border on foot and reached India with her group of friends. I am ready to fight China even now,” he said, making his hatred evident in his facial expressions.