Home » Columns » Abracadabra By K. B. Ganapathy » No X-mas cake to my sister Reverend Sr. Annette 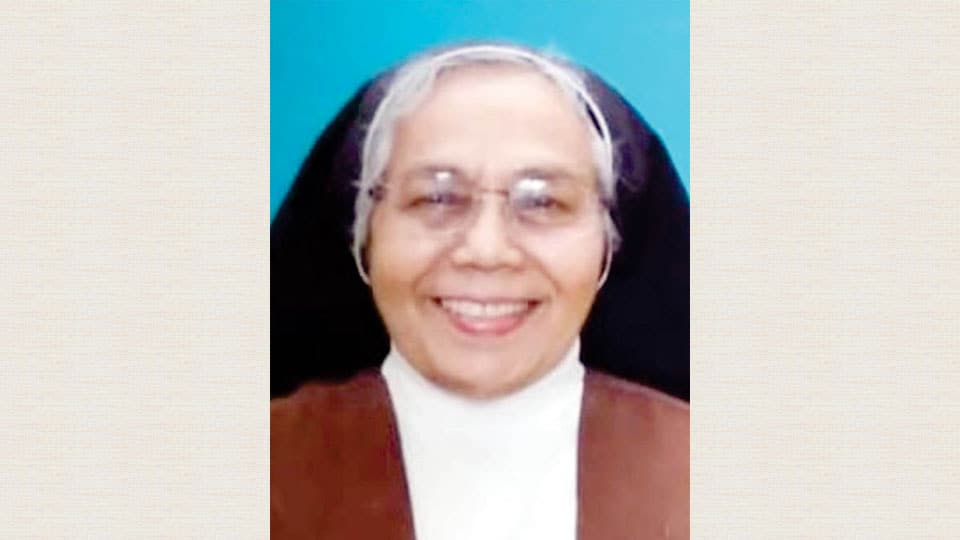 No X-mas cake to my sister Reverend Sr. Annette

My sister Annette left this world on 28th August 2021 on her final journey to the world unknown. It is said that ‘To live in hearts we leave behind is not to die.’ If so, my sister is living here with us in our hearts.

I came to know Sr. Annette when she was the Principal of Teresian College. My sister-in-law was teaching in that College and it was she who first introduced her to me. Since then I have been in touch with her if not often, but for Christmas definitely. A card and a cake would go to her after she retired in 1993. She was staying in Naguvanahalli  where I had been twice to see her, then in Nirmala Convent (Gokulam) and also at Avila Convent (near Jaganmohan Palace) after retirement. During these periods she would occasionally talk to me, enquire about my family members, specially of my brother Dr. K.B. Subbaiah and then general pep-talk. She always called me Gandhi, my pet name.

In the last about two years, during the period of COVID-19 pandemic, she was in touch with me while she was in Cochin with her sisters, enquiring about the situation in Mysuru and her desire to come to Mysuru. Everytime I enquired about her health, she would only say, “Old age you know” and mentioned only of asthma a couple of times. Not more.

READ ALSO  Musings on 40 years of Star of Mysore: The hiccups and high points

Reverend Sister Annette was an iconic Principal of the then only Women’s College — Teresian College, which she joined in 1966 and served the Institution from 1977 to 1993 as the most revered, loved Principal. Her name was synonymous with Teresian College so much so one would ask, “Did you meet Sr. Annette?” instead of asking “Did you go to Teresian College?” I learnt that she was rather too gentle and soft on her staff and would give them much liberty and freedom. She also had a sense of humour.

Once I had gone to a Christian monastery, named Anjali Ashram, along with an IAS Officer for a fellowship or call it Satsang. The head of the Ashram was clad in ochre shawl like a Hindu Sanyasi and no candle! There were pedestal lamps and earthen small lamps — diyas. The proceedings began with a prayer and who did I see playing the Thamburi, holding that huge instrument? My sister Annette! Later while leaving I addressed her as Meera Bai, the famous woman Hindu Saint seen in paintings holding a stringed instrument in her hand and dancing her way to Lord’s glory.

Rev. Sr. Annette was such a gentle, noble soul as a nun and the Principal that when she retired, her successor nun was seen as very strict and students nicknamed her as Margaret Thatcher — the then British Prime Minister known for her temper and hubris. Once I was invited by her for their Annual College Day and when I mentioned about the new Principal alluding to the nickname Margaret Thatcher, there was a deafening cheer from the students. The new Principal sitting by my side looked at me and gave me a benign smile. Apparently, the students saw a sharp contrast between their old and new Principal! Let it be.

Being an educationist par excellence, it is only proper and just that the Mysore University availed her services as the Academic Council, Senate and Syndicate Member.

It is said that “Our dead are never dead to us until we have forgotten them.” My dear sister, be assured there is a legion of your friends, admirers and students who will not forget you. Count me as one among them, sister. Your legacy will endure.

Let me now recall a poem by an American physician and poet Edward Hazen Parker by way of a tribute to a departed soul.

So said the Angel at the Pearly Gates of Heaven.

By now my sister must have already entered the Pearly Gates of Heaven. RIP.