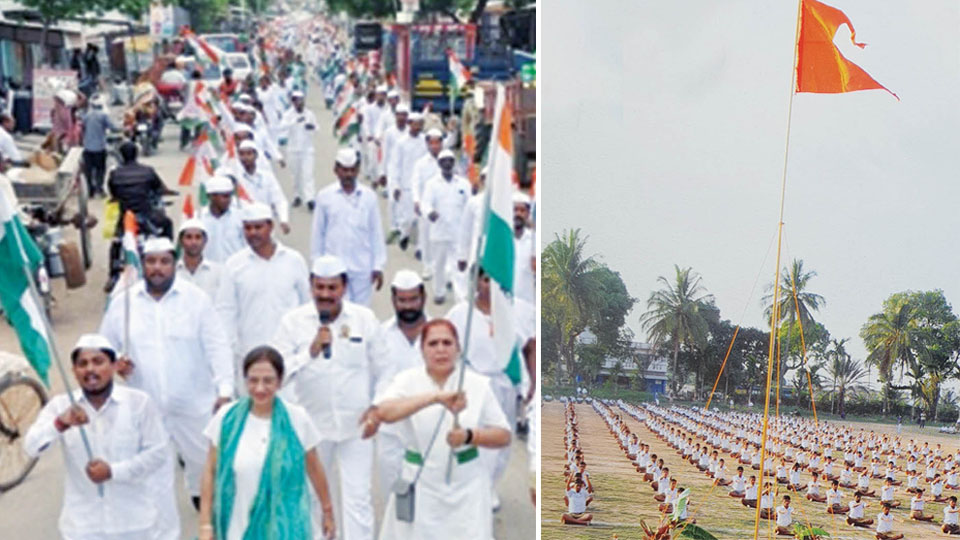 Whoever said imitation is the best form of flattery? I must give a prize to that man. That was what I felt when I read a newspaper headline yesterday reading, “Seva Dal gets set to counter RSS.” Sure, RSS must have felt immensely flattered that it is on the right track with its philosophy of Nationalism and Patriotism. Of course, minus the idea of Akhand Bharat. Nehru was opposed to this idea of Syama Prasad Mukherjee of Jan Sangh and quickly brought in an amendment to the Constitution affirming the good and friendly relations with our neighbouring country. Now neither that Jan Sangh is in existence nor do we hear about the demand for an Akhand Bharat. Let it be.

Why did Congress suddenly remember the potential of Seva Dal to revive it, nay make it active from its present dormant state, after 95 years of its twin-like existence with the Congress? It is crystal clear that the Congress is afraid of facing the BJP in the 2019 Lok Sabha Elections even as a partner with the other Opposition parties — the Mahaghatbandhan — without support from its “subsidiary” organisation Seva Dal.

This is because, the Congress thinks the major cause for BJP’s success is the backing it gets from the RSS, the originator of BJP. However, in the case of Seva Dal, it is the Congress which is the originator. Here is the difference. Therefore, Seva Dal cannot be half as effective for the Congress as the RSS is for BJP in the Lok Sabha elections.

Well, but RSS also claims the same philosophy except it calls the Secularism practised by the Congress as pseudo-Secularism. RSS openly claims to be tolerant towards non-Hindus accepting the pluralistic character of our Indian society. So where does the new revived and revitalised Seva Dal go from here to counter RSS in the coming  Lok Sabha Elections. Not very far I guess.

Interestingly, the Seva Dal in its new avatar will have a dress code of Royal Blue Jeans, white T-Shirt and a Cap, Gandhi cap, I hope. RSS too has undergone a transformation with its sartorial code by replacing the Chaddi (shorts) with Pants. Well, here Seva Dal seems to have adopted itself to the mod sartorial preference of the young with Jeans while RSS has the baggy pants. In a way, this dress code is significant because it has a message. Congress is modern in outlook, while BJP is conservative. Which is why youngsters generally toe the Congress line.

Lalji Desai, Chief Organiser of Seva Dal, All India Congress Seva Dal, told the press that the organisation will expand its functions from its present activity of managing Congress events. More to make its existence known rather than to create an impact. Interestingly, he said that there will be “no saluting the party leaders. Our salute is only reserved for the National Flag.” And, of course, to Soniaji and Rahulji ! Let me hasten to say Lalji Desai did not say this. Anyway, on the contrary RSS salutes the saffron coloured Bhagavad Dwaja.

The imitation of RSS Shakha meeting is seen in the revised programme of Seva Dal. It will soon organise flag hoisting events on the last Sunday of every month, for now, in 1,000 places. This is called ‘Dhwaja Vandana’, on the lines similar to that of RSS. The difference seems to be in what they discuss in this programme. RSS Shakha may or may not discuss the philosophy of its founder Dr. K. B. Hedgewar and other heads like Deendayal Upadhyay and Guruji M.S. Golwalkar.

READ ALSO  BJP's coup may send a nice man to Rashtrapathi Bhavan; but questions remain about politics by caste

However, Congress  Seva Dal will discuss the principles of Mahatma Gandhi and Jawaharlal Nehru. And Seva Dal volunteers may have to carry the message to the people in preparation to the Parliamentary Elections. Congress thinks, if RSS is the mascot for BJP’s victory, why not convert Seva Dal into a mascot for Congress and win? Good idea on the table, but on the ground? There is a cutting-edge difference between a Desh Bhakt and Gandhi Bhakt. BJP is the beneficiary of this difference in all the elections it is winning, according to a political pundit.

The “Bharat tere tukde honge, Inshallah, Inshallah” [India, you will be broken into pieces. God willing. God willing] agitation at the JNU, Delhi, on Feb. 9, 2016 during the commemoration of Afzal Guru’s hanging might have been forgotten by the voters by now and it would not have had any effect on Congress votes.

Unfortunately for Congress the then Vice-President of Congress and now President Rahul Gandhi went to JNU on the occasion which is perceived by the voters as Congress support to such anti-national agitation. In 2019, BJP and RSS are bound to remind the voters about Rahul’s visit.

So it is RSS Vs Seva Dal in 2019 Parliamentary Elections. With this strategy, will the Congress get more than 44 seats it has now and save its face among its coalition partners now in the Opposition? A million dollar question indeed.