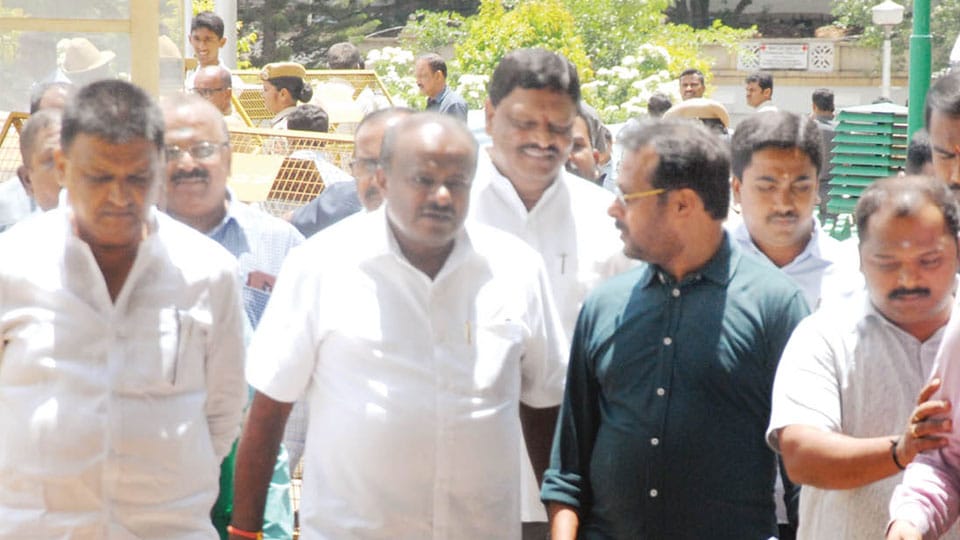 Bengaluru: The H.D. Kumaraswamy Government, which is hanging by a thread provided by the Supreme Court that has ordered a status quo till tomorrow (Tuesday), will seek Trust Vote on July 18 at 11 am.

Kumaraswamy met Assembly Speaker K.R. Ramesh Kumar this morning and handed over the Trust Vote seeking letter and informed the date. This move will give time for the Congress and JD(S) to bring its house in order and try to win over rebel MLAs and rescue the JD(S)-Congress Coalition Government.

The political crisis is not showing any signs of relenting despite hectic parleys by the leaders of Congress and J(S) as the rebel MLAs remain adamant on resignation.

The 14 MLAs, who are camped at a hotel in Mumbai, have once again sought Maharashtra Police help to block any political leader from meeting them as they suspect serious threat.

Following the Speaker’s decision to allow the CM to seek a trust vote on July 18, BJP State President B.S. Yeddyurappa (BSY) wanted the Speaker not to convene Assembly Session till that day (July 18). The Assembly that was supposed to begin at 12.30 pm today did not start till 2 pm with the MLAs going into a huddle discussing strategies and counter moves.

The BJP has announced that they won’t allow the proceedings in the House until the motion of confidence is held at the earliest. The House Business Advisory Committee (HBAC) will decide on whether the Assembly Session will be held till Thursday or not. There was no clarity on the issue till we went to Press.

READ ALSO  Will leave for Delhi after getting Amit Shah’s appointment: CM

As of now, 18 MLAs (including two Independents) have resigned bringing down the Assembly strength from 224 to 206. Congress-JDS strength has come down to 101 (including one from BSP), while BJP has 105 and support of the two Independent MLAs.

S.L. Dharmegowda, Deputy Chairman of the Legislative Council, this morning adjourned the Session till tomorrow due to the ruckus created by BLP MLCs. They were urging for the floor test and refused to conduct the proceedings in the House.

The rebel MLAs staying at Renaissance Hotel at Powai in Mumbai have written to the Mumbai Police Chief saying they don’t want to meet M. Mallikarjun Kharge, Ghulam Nabi Azad or any other Congress leader.

There have been speculations that Kharge, some other senior Congress leaders and Kumaraswamy himself may visit the hotel where the MLAS are holed up. In their letter, the rebel MLAs said they have “absolutely no intention of meeting Mallikarjun Kharge or Ghulam Nabi Azad or any other Congress dignitary.” The MLAs said they feel threatened, and requested the Police to stop any Congress leader from meeting them.

In an interesting development, BJP workers have tweeted welcoming Mysuru District Minister G.T. Devegowda (GTD) to BJP fold. The tweets sent by BJP workers have gone viral since this morning. Roughly translated from Kannada to English, the tweets read, “We welcome G.T. Devegowda who has quit father-and-sons-party (JDS) and joined BJP, appreciating the good work to the nation done by Prime Minister Narendra Modi.”

“Your son G.D. Harish Gowda was denied a ticket from JD(S) in Hunsur and why do you want to stay in a party that is already dead. Your son has been cheated,” the tweet read.