Home » Feature Articles » ‘Art of Disagreement is key to Democracy’ 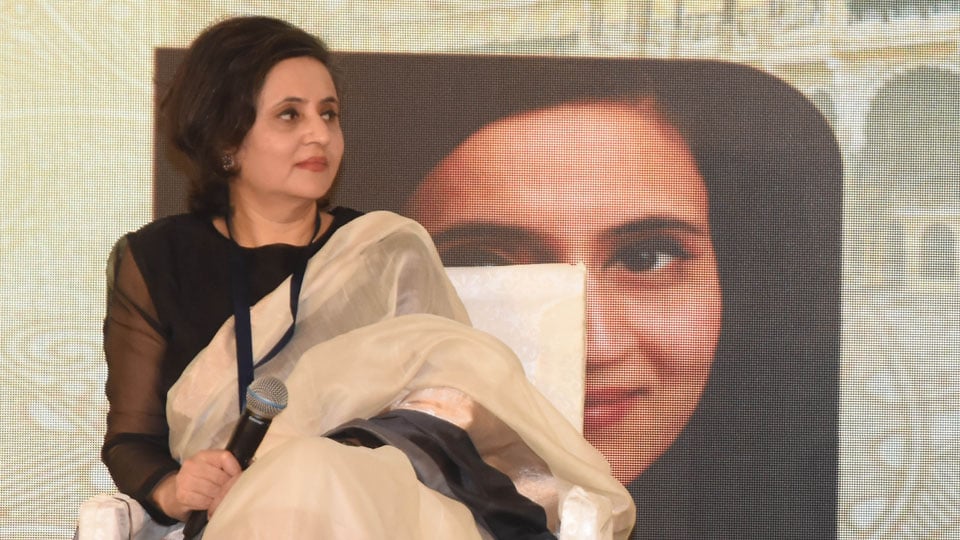 ‘Art of Disagreement is key to Democracy’

Sagarika Ghose is a well-known face in TV journalism and she is also an author. She was in Mysuru recently for the Mysuru Literature Festival where she spoke at length about her latest book ‘Atal Bihari Vajpayee’ regaling the packed auditorium with interesting anecdotes from the biography. Star of Mysore spoke to her. Excerpts:

Star of Mysore (SOM): What are the salient features of your biography ‘Atal Bihari Vajpayee’ and what made you write about a man who was a bundle of contradictions?

Sagarika Ghose: The story of Atal Bihari Vajpayee is the story of an independent India. He began his Parliament journey in 1957 and half a century later in 2004 he was still a Parliamentarian. He is credited with creating an Opposition party to challenge the hugely popular Congress party dominated by Nehru and Indira.

Today, we have the BJP in power but during Vajpayee’s times, there was another BJP party which was a lot different.

When I was approached by the publisher to write his biography, I wondered if I would be able to do justice to a personality whose ideologies, I don’t particularly agree with but when I started the research on Atal Bihari Vajpayee, his character drew me in.

He was unique in many ways; he rejected polarisation and believed in the power of dialogue. The biggest takeaway from this book is — Friendship, love, sympathy and empathy can coexist along with disagreement. We can learn the art of disagreement from him which is not just the key to democracy but the need of the hour.

SOM: Which characteristics of Atal Bihari Vajpayee written by you in your biography make him unique?

Sagarika: Most of us are labelled. It is the task of the biographer to ram through the label war and find out the real person. As a biographer of this book, I took this creative journey to find the real Vajpayee. Atal Bihari Vajpayee was unusual and multidimensional in many ways. He was a Zinda Dil Insaan (good-humoured personality) and used humour to make a point with his party members and also with the Opposition which was refreshing.

He never hid anything about his personal life. He was in love with a married woman and lived with her. Once a journalist at a press conference asked him about his relationship with Mrs. Kaul. First there was a silence and then he spoke in his typical good humourly manner, ‘Kashmir jaisa maamlahai (it’s a lot like the Kashmir issue).’

The biography is full of such light-hearted anecdotes which display the humorous persona of the former Prime Minister. In fact, there are so many jokes which he cracked on various occasions which can be compiled in a book.

SOM: How was his relationship with the RSS?

Sagarika: His father was against him joining RSS, but he defied his father and joined the organisation. He was an orator par excellence and was spotted by Shyama Prasad Mukherjee who brought him into politics to create Opposition in Parliament.

In 1957, when he came into politics as a first-time Parliamentarian, he was an RSS man to begin with but as he proceeded on his political journey, his RSS values became subordinate to his politics. His RSS upbringing evolved over time and shaped his political career.

He challenged Congress and won with a thumping majority from Constituencies across the country. Though he was challenging RSS as a politician, he was never disloyal to the organisation. He was through and through a Parliamentarian.

Sagarika: Writing is an addiction for me. I wrote five books while still in a day job, and now I’m working on the sixth. Currently, I’m researching for my next book which is a biography. I am a disciplined writer and write for 6-8 hours on most days. I also speed-write. I believe in bringing the first draft out first. The actual writing begins after that. Quite like the Nike ad — Just do it.

Get to your laptop and start writing. My mantra is to wake up early, and work on my book. I love to stay inside my book cave and don’t want to come out of it.

Afternoon is again some writing and reading. I am a voracious reader. I write a fortnightly column for TOI so I do have a deadline but not the daily deadline which is bliss. I’ve done enough of that and now I’m enjoying this phase of life which is slow and mainly involves reading and writing books.

SOM: You have not followed in the footsteps of your illustrious father; was it a conscious choice?

Sagarika: My father (Bhaskar Ghose, former Secretary, Ministry of Information and Broadcasting and Director General of Doordarshan) discouraged me from taking up civil services as he said, the civil services had changed beyond recognition. In today’s times, political pressure doesn’t allow bureaucrats to function independently.

Coincidentally, my children too haven’t taken to my profession. I actively discouraged them to pursue journalism whereas Rajdeep was neutral. Our son Ishan was good in Biology, so the medical profession was a natural choice, and daughter Tarini is a lawyer. She was moved by the Arushi Talwar case and decided to pursue law.

SOM: In times of social media which is completely unorganised, how does one distinguish between fake & real news?

Sagarika: It’s extremely challenging to separate wheat from the chaff. We can’t expect governments to do it as they are obviously biased. It has to be done only by us journalists.

I’m a fan of slow journalism. Three decades ago, when we started working, journalism was different. The news item travelled from raw reporter to desk, to the news editor, to the deputy editor before it was published in the newspaper. It had to pass through layers of verification before it reached the reader, but these days journalism is a lot different. Everything has to happen quickly giving the journalists no time to verify the news which could malign someone’s reputation. It is all about TRPs and who puts the news first.

SOM: Do women journalists have it tougher compared to men?

Sagarika: It has been a rewarding journey for me. I had the good fortune of working under supportive bosses like Dileep Padgaonkar and Vinod Mehta who made it possible for me to balance work and life. I also had support from my mother and mother-in-law. Unlike their male counterparts, women journalists have to balance both work and home. Not only that, women journalists are trolled more and face more threats than men. Maybe because people can’t see women in high positions.

Sagarika Ghose, apart from the latest ‘Atal Bihari Vajpayee’ has authored four books, two in fiction — The Gin Drinkers and Blind Faith. Her non-fiction books are — Indira: India’s Most Powerful Prime Minister and Why I Am a Liberal: A Manifesto for Indians Who Believe in Individual Freedom).

Rajdeep Sardesai and Sagarika Ghose, the well-known journalist couple, were panellists in Mysuru Literature Festival. Sagarika Ghose was part of the panel titled Yes Prime Minister where she spoke about her latest book ‘Atal Bihari Vajpayee’ and Rajdeep Sardesai spoke about his book ‘Democracy’s 11 – The Great Indian Cricket Story.’ On behalf of Star of Mysore, Sujata Rajpal spoke to them. Excerpts:

Star of Mysore (SOM): How did your love story begin?

Sagarika Ghose and Rajdeep Sardesai: We first met in Jamshedpur in August 1986 for the Rhodes Scholarship interview. I (Sagarika) was from St. Stephen’s College, Delhi and Rajdeep was from St. Xavier’s, Bombay. I got the scholarship but he didn’t. (Rajdeep adds: I’ve never forgiven her for that. So, I got both by marrying the girl with the scholarship). Rhodes or no Rhodes, we met in Oxford. I was there on Rhodes and he on a Commonwealth Scholarship. But we didn’t get to meet each other often as he used to be with his sporty gang and I with intellectual women.

In 1990s, there used to be a hotline between Delhi and Bombay TOI and we would talk on this hotline. In office, we were called the hotline couple. (Rajdeep adds: Two factors brought us closer — firstly, at work, both of us were the only ones in the same age group as the rest of our classmates had left for America to pursue greener pastures. Secondly, in 1991-93 there were many hot issues such as Mandal Commission on which I wrote strong pieces. She was floored by my intellectual calibre. We tied the knot in 1994, and the love story continues.)

SOM: How’s your experience working together? And what is your advice for married couples who work in the same organisation?

Sagarika and Rajdeep: We worked together from 2005-2014 when he started his own venture, CNN-IBN, and he needed a team of trusted journalists. Since it was his start-up, it made sense to have both of us work together. We spent a lot of time together at work and made sure not to discuss anything work related at home. We did have our professional differences which we would sort it out quickly. The tensions flared up as quickly as they subsided. It was fantastic working together; we were sounding board to each other and were/are each other’s strength. Rajdeep is the first person to read my manuscript.

Rajdeep adds: While working in Times of India, I was fortunate to have shared a cabin next to R.K. Laxman. Every morning I would spend an hour with him. He always used to say, journalists have bloated egos and tattered minds. Because CNN-IBN was a legacy and my own, we decided to work together. Otherwise, it’s not advisable for married couples to work in the same organisation, especially true in our industry as there is a competitive edge to it. Professional jealousies are likely to turn into personal differences.

SOM: What is a typical day in your life?

Rajdeep: My day doesn’t start very early as I work till late. In the mornings I laze around, read newspapers and plan about what’s going to be on the channel in the evening, I leave for work around 6.30 pm and work till 10.30. I’m dead tired when I return and just crash.

I write a fortnightly column but for writing a book, I would have to take time off. Currently, TV is grabbing me. It’s difficult to balance writing and TV as it is taxing on both mind and body. TV is like running on a treadmill and you can’t get off. I love my job, it’s like a drug, an addiction so one just goes on.

Writing a book needs discipline. Unlike Sagarika, I am not very disciplined. Currently, I’m immensely enjoying TV but one day I would want to devote more time to writing books but that looks like a distant dream. I would love to write a thriller, a murder mystery, perhaps. Hopefully, it will happen.