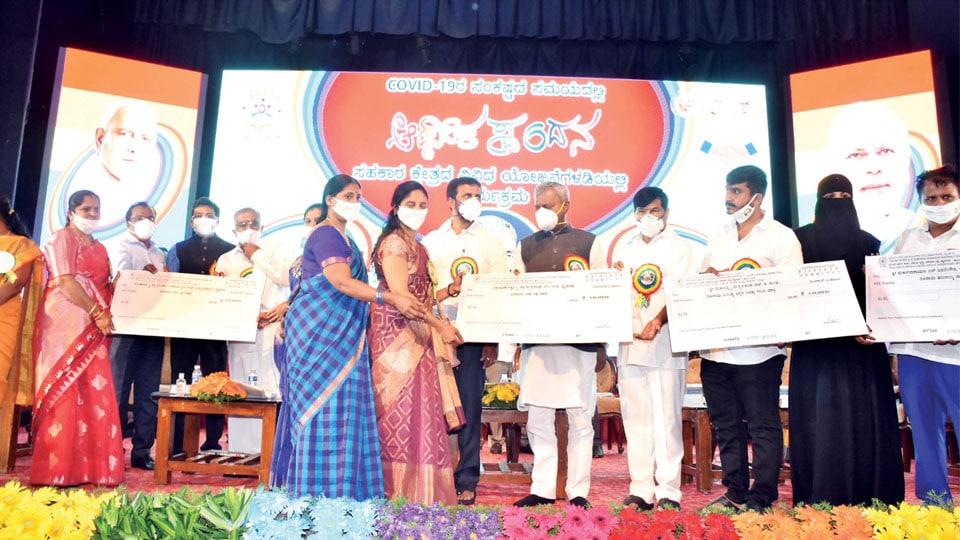 Mysore/Mysuru: In a first initiative of its kind in the State,  Minister for Co-operation and Mysuru District Minister S.T. Somashekar distributed loans to COVID-19 distressed beneficiaries of  various schemes of Co-operation  Department at Mysuru Revenue Division ‘Arthika Spandana’ programme organised at Kalamandira on  Hunsur road this morning, marking the birth anniversary of Mahatma Gandhi.

Somashekar inaugurated the programme by offering floral tributes to a portrait of  the Mahatma and lighting the lamp.

Speaking on the occasion, Somashekar said that Co-operative Institutions and Societies have been playing a major role in the growth of rural economy.

Noting that the Co-operative Sector too, just like any other sector, is hit hard by the outbreak of the deadly COVID-19 pandemic, he said that Prime Minister Narendra Modi announced ‘Atma Nirbhar’ scheme and  sanctioned Rs.4,525 crore economic package for the State in this hour of COVID crisis.

Pointing out that the Co-operation Department aims to provide loans at zero or minimal rate of interest to fishermen, dairy farmers and the like during this critical period, he said that the Department has planned to earmark Rs.100 crore for extending loans to fishermen and such others.

Stating that it has been targeted to advance Rs.39,000 crore loans to over 37,000 Co-operative Societies of the State, Somashekar said it has been planned to distribute Rs.4,285 crore loan to about 5.65 lakh farmers of eight districts in Mysuru Revenue Division (Mysuru, Mandya, Hassan, Kodagu, Chamarajanagar, Chikkamagalur, Udupi and Dakshina Kannada) and so far, Rs. 2,866 crore has been distributed to 2.94 lakh farmers.

READ ALSO  Recovered alcoholic helps others to kick the habit

Continuing, the Minister said Rs.4 crore has been distributed to nearly 4,000 street vendors under ‘Badavara Bandhu’ scheme and Rs.10 crore to 131 Self-Help Groups (SHG) under ‘Kayaka’ scheme. Also, over 82,000 members of a number of Town Co-operative Banks of Mysuru Revenue Division have been advanced Housing, Personal, Vehicle and Jewellery loans amounting to Rs.2,221 crore, during this critical period where the deadly COVID-19 pandemic has caused havoc across the globe, he said.

Lauding the Milk Co-operative Unions in the Division for their excellent performance despite adverse conditions, Somashekar said that the Government was remitting Rs.1.62 crore daily to the Milk Unions for pay-    ment of Rs.5 per litre as  incentive to farmers.

Maintaining that Co-operative Societies in Mysuru Division was different from those in other regions in terms of their  performance and innovative growth ideas, he said it is happy to note that the Co-operative sector in the region has provided employment to over 25,000 people.

He thanked Co-operative Societies and all other stakeholders of the Department for their extensive support to the Government during COVID crisis.

Chamundeshwari MLA G.T. Devegowda, who is also a former Co-operation Minister, in his address, said it was the Co-operation Department which first came to the aid of the State Government by remitting  Rs.57 crore in no time for COVID Fund.

Stating that there are about 8 lakh Co-operative Societies in the country with over 30 crore members,  he said that Co-operative Institutions  collectively have Rs.1 lakh crore fund.

Asserting that the Co-operative Sector is the driving force for the economic empowerment of the poor, Devegowda called upon the members of Societies who have availed loans to make timely repayments and thus ensure that the sector remains strong and extends beyond its boundaries. Underlining the principles on which the Co-operative Sector functions, the MLA warned against misuse of funds in Societies as it will have a cascading effect on the sector.

K.R. MLA S.A. Ramdas released a 30-minute documentary on the functioning of the Co-operative Sector, while Co-operation Department Principal Secretary Tushar Girinath released a special issue of ‘Sahakara’, a monthly magazine brought out by the Department, on the occasion.