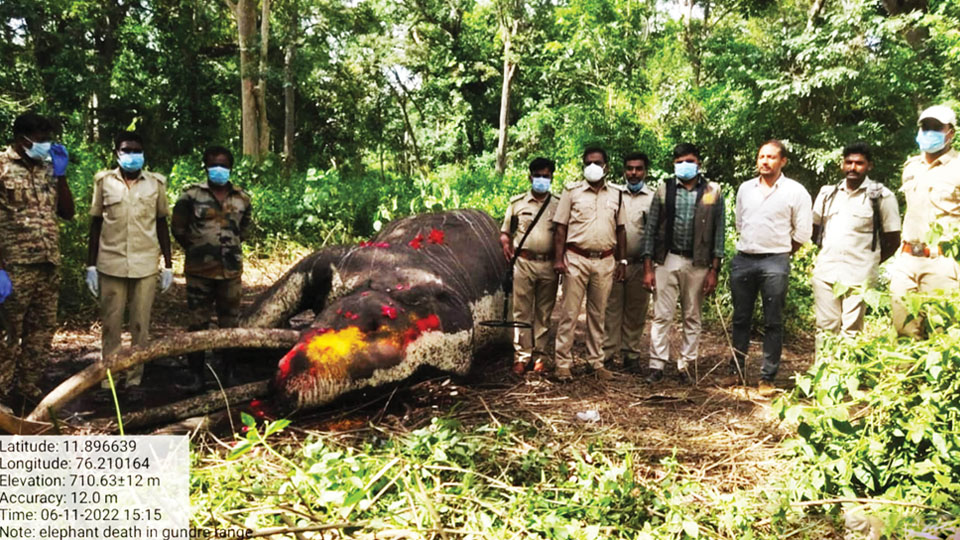 With 8 ft.-long tusks, he was nicknamed Mr. Kabini

H.D. Kote: Bhogeshwara, the longest tusked elephant in Asia, which used to mesmerise visitors at Kabini backwaters in Nagarahole Tiger Reserve limits has died and the news of his death has shocked wildlife lovers especially those who used to frequent Kabini backwaters just to have a glimpse of him.

Nicknamed as ‘Mr. Kabini,’ the carcass of Bhogeshawara was found among lantana bushes at Gundre Range in Bandipur Tiger Reserve. He had breathed his last in Nayi Halla area in front of Mastigudi about two days ago and his carcass was noticed by the Forest Department personnel yesterday.

Aged between 65 and 68 years, Bhogeshawara was mild in nature and used to spend most of his time near Bhogeshawara Temple in D.B. Kuppe Range and hence he was the most wanted elephant for wildlife photographers, wildlife lovers and Forest Department staff, who used to lovingly call him as Bhogeshwara.

He was a celebrity elephant since three decades and was the elephant with the most number of photos clicked by wildlife photographers at Kabini backwaters. He used to appear before safari goers and come close to safari vehicles and boats in Kakanakote (Dhammanakatte) Safari route and Kabini Jungle Lodges and Resorts centre, but had never attacked people or has damaged vehicles due to his calm nature.

Post-mortem was conducted on the spot and it is suspected that he had died of old age, but the exact cause of his death would be known only after receiving the post-mortem report, said Forest Department officials. Assistant Conservator of Forests (ACF) Naveen, Range Forest Officer (RFO) Amrutesh and other Forest officials visited the spot.

Cremation not done; tusks sent to Aranya Bhavan in Mysuru

Following the order, issued by Principal Chief Conservator of Forests (Wildlife) Vijaykumar Gogi on  Apr. 6 instructing the forest officers to leave the carcasses of wild animals in the open so that it will be food for scavenger birds like vultures and animals like hyena, the carcass of Bhogeshwara has been left as it is, sources said.

“Carcasses of wild animals, both herbivores and carnivores that have died of natural or unnatural causes — including in places of natural calamity — are being burnt. However, carcasses play a major role by providing food to different species of animals and birds,” the circular said.

The circular is based on the views expressed by senior wildlife scientist and conservation biologist Dr. Sanjay Gubbi.

However, the circular states that this new order does not apply in the case of tigers and their carcasses will be disposed of as per the norms prescribed by the National Tiger Conservation Authority (NTCA).

After the post-mortem was conducted by the Department’s veterinarian, the tusks of Bhogeshwara was removed and has been sent to Aranya Bhavan in Mysuru for safe custody, sources added besides stating that there are plans to exhibit the tusks in near future.

Usually, Asian Elephants have tusks ranging from 3 to 4 feet, but Bhogeshwara had 8 ft.-long tusks, which is a record, thus earning the name for having the longest tusks among elephants in Asia.

While African elephants have long tusks, Asian Elephants with long tusks is very rare and special. Bhogeshwara’s tusks used to touch the ground which had made it difficult for him to graze, hence, he used to kick the ground, separate grass from soil and then used to pick up the grass with his trunk. He was unable to bend his head like other elephants.