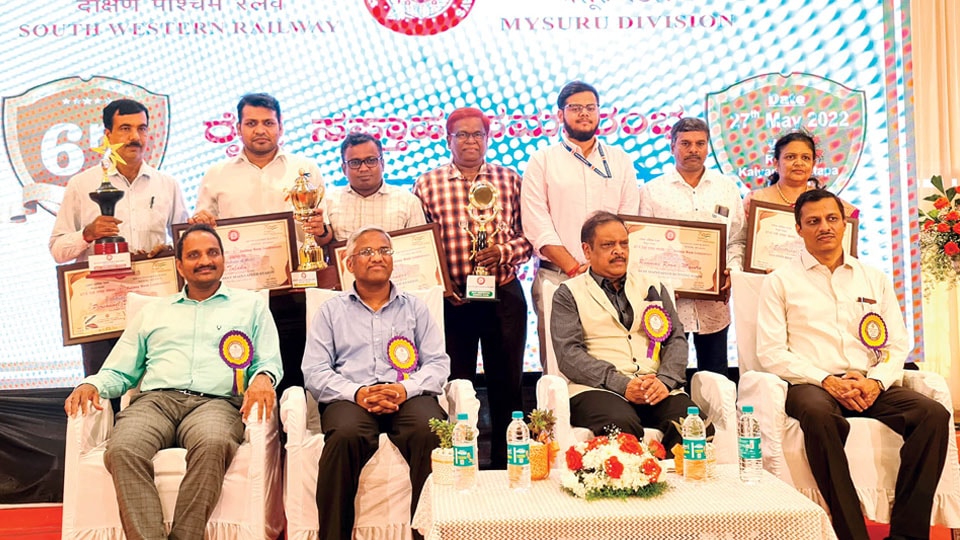 Rahul Agarwal, Divisional Railway Manager (DRM), SWR Mysuru Division, who was the chief guest, presented awards to the employees who have excelled in their work. 86 staff received individual awards while 10 group awards for 60 employees were also given for exemplary performance during the financial year 2021-2022.

Briefing about the performance of the Division for 2021-22, the DRM said, “The Division has won overall efficiency shield for the year 2021-22 apart from efficiency shields for Accounts, Electrical, Medical and Operating department, Best Maintained Station Major – Davangere Station, during the 67th Railway Week award held at Head Quarter Level in SWR Hubballi.

Apart from this, 6 Officers and 34 employees of the Mysuru Division have been awarded for their meritorious service by SWR General Manager at the Zonal-level during Railway Week celebrations held on May 18.

Mysuru Division is also the first division over Indian Railways to complete 100% Unique Medical Identification card registration and generation of cards for serving employees. For providing better services, 28 coaches were permanently augmented  while 384 coaches were provided for temporary augmentation in various trains originating  from the division.

On environment initiative, Solid Waste Management Plant was commissioned at Mysuru  along with several drives being conducted on Swachh Bharat, ban of plastics and water conservation. Around 3,000 trees were planted in an effort to provide green  cover over the division.

On the front of staff welfare, efforts were made for time bound promotions and expeditious  settlement. 750 employees were promoted/ granted financial up gradation with 90 normal  settlements made within the stipulated period. 101 promotions based on suitability were completed within time.

In terms of infrastructure augmentation, 14.7 kms of track doubling was commissioned between Sampige Road – Arsikere and Haveri-Karajgi sections, along with electrification of 64 route km between Chitradurga & Hosadurga; The sectional speed was increased for 142 route km and loop line speed for 70 route km; 8 level crossings were eliminated during 2021-22 by way of constructing RUB/ROB.

SWR Women’s Welfare Organisation is promoting various social & welfare activities for the betterment of lives of Railway men & their families. The Lalitha High School run by them is rendering yeomen service imparting quality education to the wards of Railway employees.