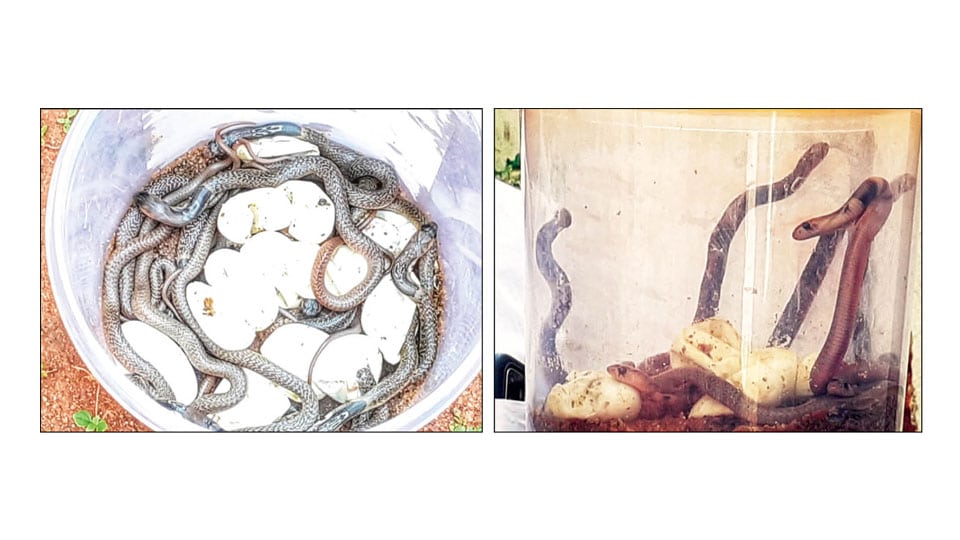 Nanjangud: A snake rescuer, who rescued a Spectacled Cobra from a well, found that the snake was pregnant and helped the eggs to hatch through artificial incubation after seeking advice from experts.

Snake Basavaraju of Golur village in Nanjangud taluk is not only a snake rescuer but also a wildlife conservator.

On Mar. 14, one Siddappa of Horalawadi saw a snake fallen inside the well in his argi field and informed Snake Basavaraju about it. Basavaraju, who climbed down the well, saw that the snake was a Spectacled Cobra, a venomous snake and rescued it.

After reaching the top of the well, Basavaraju opened the bag, in which he had rescued the snake and came to know that the snake was pregnant as its belly had eggs. As it had become dark, Basavaraju brought the snake to his house to release it into its natural habitat the next day morning.

The next day morning, he saw that the snake had laid 18 eggs. He later released the rescued snake into its habitat and informed about the snake eggs to Herpetologist Dr. Ravindranath Aithal, popularly known as ‘Snake Doctor’ in Puttur, Chandru Halladakeri of Nanjangud Yuva Brigade and teacher Yatish.

Basavaraju, under their guidance prepared to provide artificial incubation to the eggs and after 75 days of successful incubation, 13 out of the 18 eggs hatched and snakelets emerged from them. Basavaraju has released the snakelets into the forest area.

Snake Basavaraju is popular in and around Nanjangud town and is involved in rescuing snakes be it day or night. He is always there to provide relief to many who calls him on his phone whenever they spot a snake. He rescues the reptiles and release it into its habitat.

A few days back, a vehicle had hit a bull belonging to the temple resulting in the horns of the bull getting broken.

Basavarju, who brought a veterinarian, got the bull treated for its injuries. He can be contacted on Mob: 99458-77757.

The Indian Cobra (Naja Naja), also known as the Spectacled Cobra, Asian Cobra or Binocellate Cobra, is a species of the genus Naja found, in India, Pakistan, Bangladesh, Sri Lanka, Nepal and Bhutan. This highly venomous snake is a member of the “big four” species that causes the most snakebite deaths of humans in India.

The Indian Cobra is revered in Indian mythology and culture, and is often seen with snake charmers. It is now protected in India under the Indian Wildlife Protection Act (1972).

When confronting potential aggressors, including humans and mongooses, the Indian Cobra is usually slow to bite. It prefers to use the threat display and sharp hisses. Bites to humans are common, however, because of accidental encounters and excitability on either side.

The Spectacled Cobra is a good swimmer and active both in daytime and night. They feed on rodents, toads, frogs, birds and snakes. Spectacled Cobra lays eggs between April and July. The female Cobra lays between 10 to 30 eggs in abandoned rat holes or termite mounds and stays with the eggs until they hatch in about 60 to 75 days. The hatchlings (Snakelets) measure between 20 and 30 centimetres (7.9 and 11.8 inches) in length and are independent from birth and have fully functional venom glands.