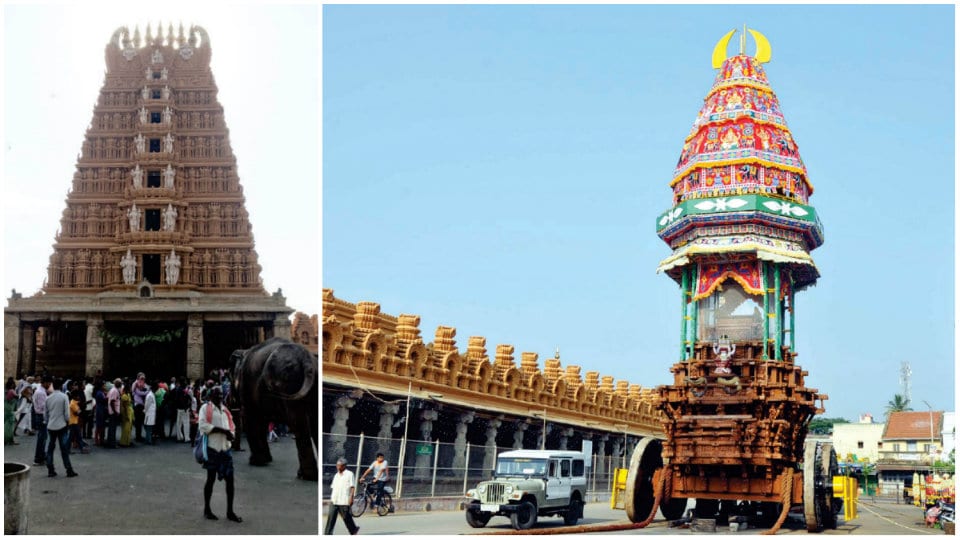 Nanjangud gets ready for the annual Sri Gautama Panchamaharathotsava on Apr.7

Police face a daunting task to provide security for car  festival and by-election in the temple town on Apr.9

Thousands of devotees have started arriving from various parts of the State for the Dodda Jathra Mahotsava of Lord Srikanteshwara or Nanjundeshwara at the temple town. Their numbers will touch over a lakh on April 7 to witness the annual car festival at ‘Dakshina Kashi.’

This year, the Jathra is being held two days before the voting to the Nanjangud Assembly by-election on Apr. 9 where former Minster V. Sreenivasa Prasad of the BJP is pitted against Kalale Keshavamurthy of the Congress. The town will be a hub of activities for the next four days with politicians, party workers, various vendors and devotees jostling for space with each other.

In the run up to the Jathra Mahotsava, the main street of the temple town, on which the chariots of Lord Nanjundeshwara, Goddess Parvathi, Lord Ganapathi, Lord Chandikeshwara and Lord Subramanya would be taken around, is being bedecked with colourful serial lights and other decorative materials. 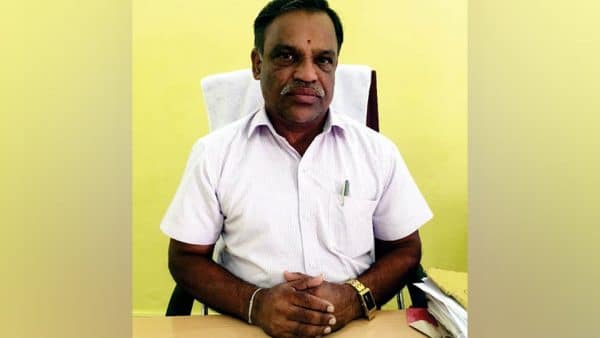 Speaking to Star of Mysore, Nanjangud Srikanteshwara Temple Executive Officer (EO) Jayaprakash said that Deputy Commissioner D. Randeep and Superintendent of Police Ravi D. Channannavar have held two rounds of meeting with temple officials and have personally examined the temple premises to ensure fool-proof security measures and have prepared a blueprint on the placement of security personnel and CCTV cameras.

“We have already installed 20 CCTV cameras inside and 35 cameras outside the temple premises. Arrangements are also being made to install cameras at parking areas, banks of River Kapila and other strategic places. The District Police will also provide exclusive security during the festival and additional forces will be brought in from neighbouring districts,” he said.

The Public Works Department has taken up the repair works of the main street and the road would be converted into a concrete one once the annual festival is over. “We have also dug an extra borewell to make sure there is adequate drinking water to the devotees,” he said.

It is a normal practice in Nanjangud where social organisations distribute drinking water, butter milk, a variety of rice dishes and curd rice to devotees during the Jathra Mahotsava. This year since the election is just two days after the Jathra, temple authorities will have to seek permission from the Election Commission before permitting the organisations to distribute food.

“We have received over 20 applications from organisations seeking permission to distribute butter milk and food to devotees and we have sent them to the Deputy Commissioner’s office and from there they will be sent to the Election Commission for approval,” said Jayaprakash.

Chariots being prepped: The main attraction of Nanjangud Jathra is the Sri Gautama Panchamaharathotsava where five giant chariots are taken around the main streets surrounding the temple. The six-wheeled chariot on which the idol of Lord Nanjundeshwara will be carried is said to be over 200-years-old. The temple authorities have made sure that the wheels of chariot are repaired before the car festival. 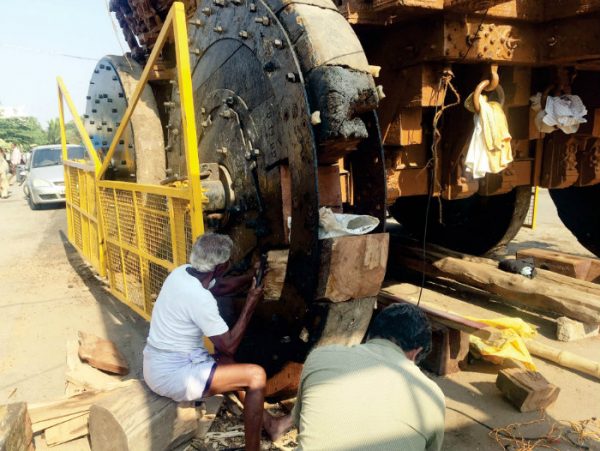 A carpenter is seen working on the main chariot’s wheel to replace the old wooden piece with a new one.

A group of five workers — M.C. Rajashekarachar, Prabhuswamy, Mahesh, and Nagendrachar under the leadership of Mahadevaswamy of Mullur village — have been working since the last 15 days to make sure that the chariot is ready for the festival. They are replacing old wooden pieces of the giant wheels with new ones. The last time the wooden pieces were replaced was during 1982.

Mahadevaswamy is the grandson of Siddappachar who used to work on the chariot wheels. After the demise of his grandfather and father, he has taken up the responsibility. He said that the rear wheels of the main chariot have to be replaced with new ones and added that the same would be done before the next year’s festival.

Rituals of this year’s annual car festival which began on Mar. 31 will end on Apr. 11.