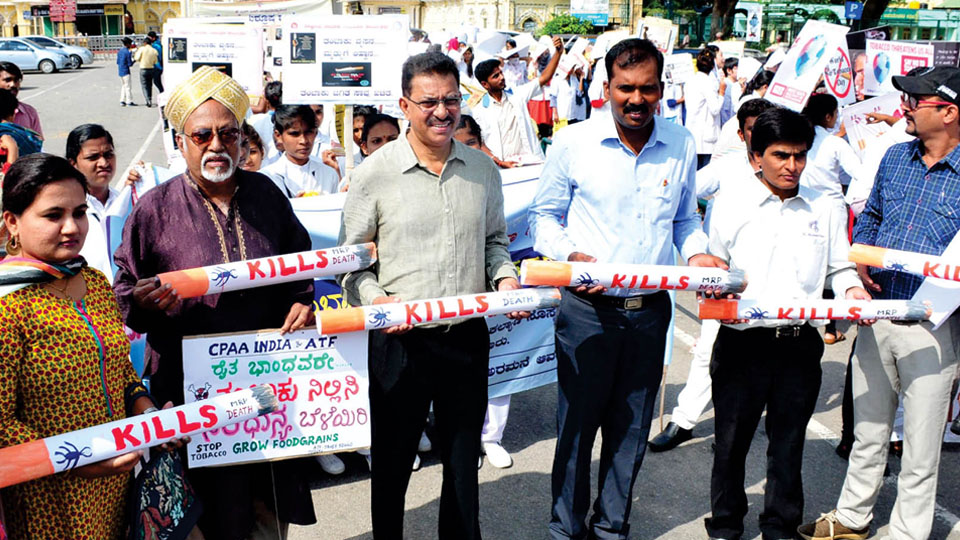 Mysuru:  Marking World No Tobacco Day, the Department of Health and Family Welfare, District Surveillance Unit and District Tobacco Control Unit together had organised an awareness rally in city this morning to spread a message on the ill-effects of consumption of tobacco.

The rally was flagged off by Additional DC T. Yogesh in front of Kote Anjaneyaswamy Temple. The rally passed through Gandhi Square and reached near DC’s office where a short play was staged by participants.

About 400 nursing students and staff of nursing schools and colleges participated in the rally holding placards with meaningful messages like ‘Farmers – stop tobacco and grow millets’ and ‘Tobacco is invitation to death’.

Speaking on the occasion, Yogesh said that tobacco consumption would definitely spoil the health of the person. He asked youths to shun tobacco to maintain better health. He added that tobacco contains carcinogenic contents which can cause cancer in the long run.

Dr. Suma announced that a tobacco de-addiction centre was functioning at K.R. Hospital for the last one year where free counselling was offered and added that a free oral cancer detection camp was being held today at the centre.

As part of World No Tobacco Day, Columbia Asia Hospital, Mysuru, has organised a Screening Camp from May 31 to June 7 at Rs. 500 which includes consultation with Pulmonologist, Chest X Ray and PFT. For appointments call Ph: 0821-3989896 or WhatsApp: 96203-89896, according to a press release from Dr. Lakshmi Narasimhan, Consultant Pulmonology – Columbia Asia Hospital.