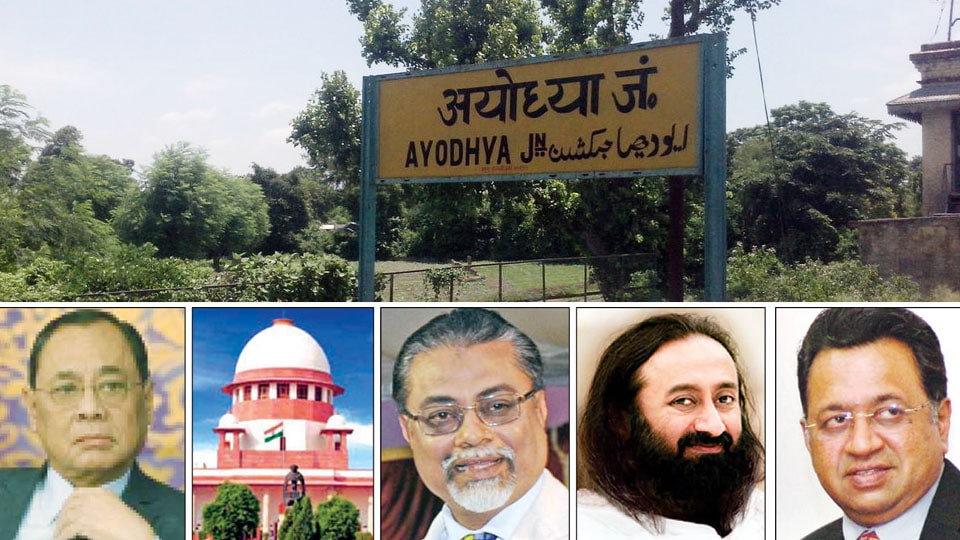 New Delhi: The Supreme Court (SC) today gave its judgement, ordering a formal mediation in the Ayodhya case, as a roadmap to amicably settle the 60-year-old Ram Janmabhoomi-Babri Masjid dispute.

A Five-Judge Bench led by Chief Justice of India (CJI) Ranjan Gogoi said the case was not about property, but about “mind, heart and healing, if possible.” While the Supreme Court is in favour of mediation in the case, most parties involved do not approve of mediation.

The Supreme Court has formed a three-member panel to meet all the petitioners in the Ayodhya dispute case. The Three-Member Mediation Committee will include former SC Judge Justice F.M. Ibrahim Kalifulla, 68; senior advocate Sriram Panchu, 69 and Sri Ravi Shankar Guruji, 62. Justice Kalifulla would be the Chairperson of the Committee. The mediators can induct more members in the Committee, the Apex Court said. The Panel is likely to complete the mediation process in a period of eight weeks.

“Mediation will take place. We don’t see any legal obstruction to it,” said Chief Justice Ranjan Gogoi while delivering the order. “Mediation proceedings will remain confidential. There would be no reporting in any media,” he added.

During the last hearing on Wednesday, most of the Hindu petitioners, the Uttar Pradesh Government and the Consul of “Ram Lalla”, the deity infant Lord Ram, had shown reluctance towards mediation. The Sunni Waqf Board, ready to give mediation a shot, is concerned about privacy during negotiations. The Nirmohi Akhara, another petitioner in the case, has also agreed for mediation.

The Constitution Bench, which is hearing the case, said mediation may help in “healing relations.” Even if there is “one per cent chance” of settling the dispute amicably, the parties should go for mediation, the Bench had said.

Two years ago, the Court had suggested that the two sides explore the possibility of resolving the matter through negotiation. The Court even said it was ready to mediate if they agreed. But negotiations did not take off as all sides involved said they wanted the Court to take a call.