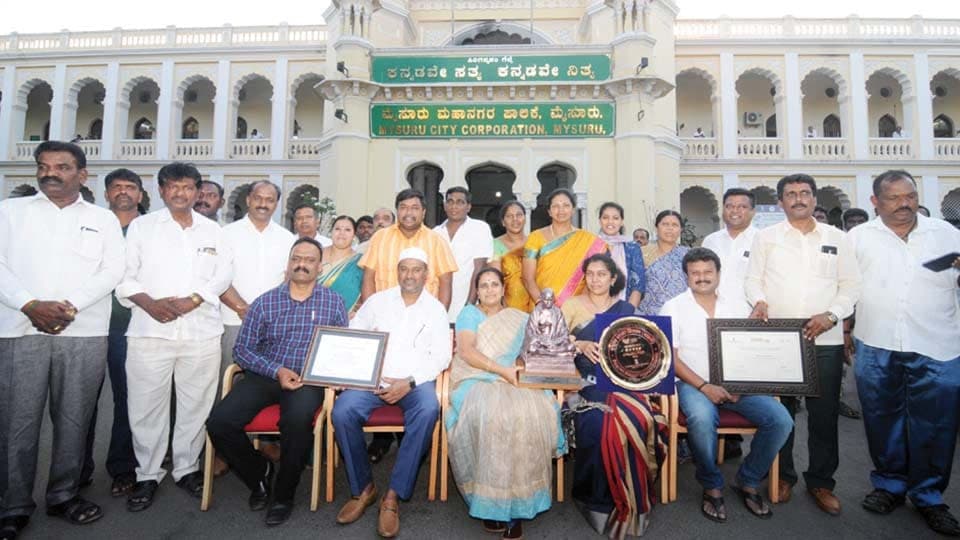 Mysuru:  “Mysuru city bagging the third place in cleanliness is a matter of pride. More stress would be given to cleanliness in the coming days to bag the first place,” said Mayor Pushpalatha Jagannath.

Addressing a press conference at the Mysuru City Corporation (MCC) premises here yesterday, she said that the Cleanest City awards are being given from 2014-15 and Mysuru bagged the Cleanest City tag for two consecutive years and dropped to the fifth place in 2016-17 and eighth place in 2017-18. But now, with the efforts of everyone, the City has bagged the third place, she added besides stating that everyone would work hard to clinch the first place next year.

Continuing, the Mayor said that a total of 4,237 cities participated in the 2019-20 Swachh Survekshan and added that various organisations conducted survey in various stages and based on their reports, Mysuru city bagged the third Cleanest City  in India award.

Mysuru City, in the Open Defecation-Free survey has bagged ODF Plus and has been given Five Stars in Garbage-Free City survey. Indore, which has bagged the first place, has got 4,659 points, Ambikapur in Chhattisgarh which bagged the second place has secured 4,394 points and Mysuru which got 4,379 points has come third, Mayor Pushpalatha Jagannath said.

Stating that less marks was scored in Community Partnership and Documentation, the Mayor said that the cities which bagged the first and second places have secured ODF Double Plus while Mysuru City has bagged Single Plus because of the huge garbage piled up at the Sewage Farm. Tender would be called soon to clear the garbage there so that we would be able to score more points during the next survey, she added.

Speaking on the occasion, she said that Mysuru which was placed in the eighth position last year has bagged the third place this year because of the efforts of the Pourakarmikas who worked day and night and hence they were felicitated.

BJP Ward 23 President Pramod, who also spoke said that each morning, the Pourakarmikas begin their work to keep our city clean and called upon the residents not to throw garbage indiscriminately and co-operate with the Pourakarmikas so that the city could bag the first place next year.