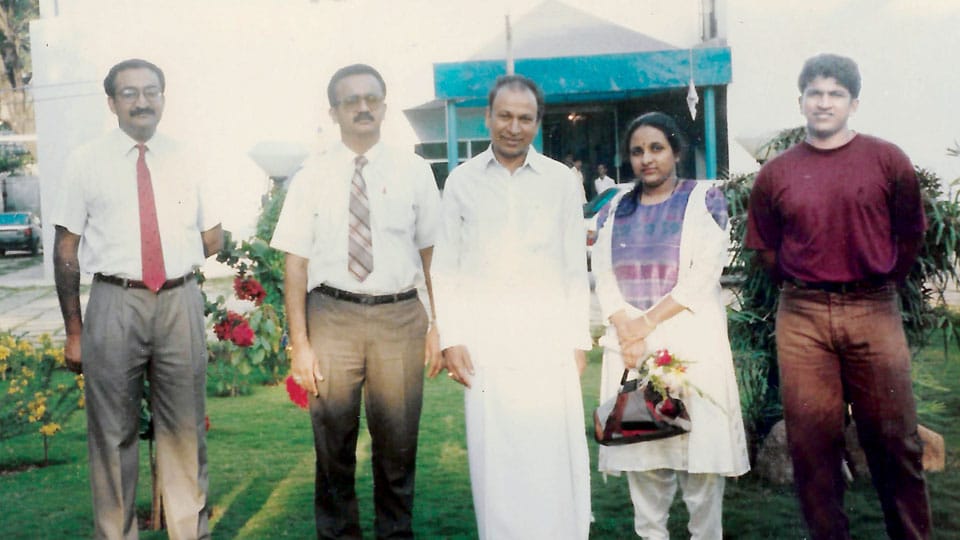 When I met Puneeth Rajkumar for the very first time, it was on the occasion of the Grihapravesham function (house- warming ceremony) of The Lohit Farm House of Dr. Rajkumar, 30 miles from Bengaluru (on the Mysuru Road), during May-1983. Puneet’s original name was Lohit, which was also the name of the Farm House. My elder brother Jayasimha (who has been a close family friend of Dr. Rajkumar, continuing my father’s association with their family) had taken Chandru (of the then Krishna Talkies, Chamarajanagar) and me to the function.

The evening on the day of the function was Star-studded and very pleasant. The eight-year-old boy Lohit (Puneeth) had mingled with us, telling “That’s not only a television, look there, video player is attached!.” In between his bubbly conversation, he had started searching for his mother (Parvathamma Rajkumar), pestering her to be seated near him only Amma, neenellu hogabeda, ille kootuko…! (Amma, don’t go anywhere, sit here!)

I again met Puneeth in July 1994, when he constantly accompanied his father, thespian Dr. Rajkumar, for the physiotherapy sessions of the latter. Since my husband was the Chief Administrator of HOSMAT Hospital at that time, I had got the opportunity to monitor Dr. Raj’s Physiotherapy sessions and interact with the family for over a period of six weeks. The nineteen-year-old Puneeth then itself was very enthusiastic about the ‘Fitness equipment’ and had requested me to show and explain the gym-equipment established in the HOSMAT Hospital’s Sports’ Medicine department.

Just before ending the physiotherapy sessions of Dr. Rajukumar, I had clicked a few photos of Dr. Raj, his daughter Poornima and of Puneeth within the hospital premises. Puneeth, on the other hand, had taken our [doctors’] shots with Dr. Rajkumar. Barodaa Doctre… tumba thanks! (See you doctor, thank you so much) were the words, Puneeth used to tell me, each time before he left the hospital along with his sister and father.

I met Puneeth, at his paternal home in Sadashivanagar during August-2000, when Dr. Rajkumar was kidnapped by Forest Brigand Veerappan. Holding back his tears and apprehension Puneeth told me “For the sake of my mother’s mental and physical health condition, none of us are shedding any tears. Frankly speaking we really do not know, how to cope up with the situation!”

In 2012, when Puneeth Rajkumar was hosting Kotyadhipati reality show in Kannada, he had requested me to put certain of their family photos that I had shot, into a CD and kindly hand over the same at The Suvarna Channel Office, on Infantry Road. On his behalf, his maternal uncle Chinne Gowda had called me and I had compiled with his request. Puneeth had sent an SMS to my mobile ‘Thank you Doctor!.’

I immensely like his acting in Kannada movie Milana and as a child artiste, his unparalled acting in Bettada Hoovu, Bhakta Prahlada and Chalisuva Modagalu.

An inheritor of his father’s nose, acting potential and simplicity combined with down to earth attitude, I am quite perturbed and trying to seek an answer for my question “why did Puneeth leave so early without telling any of us — Barodaa Doctre…..”

Sandalwood’s prince, Yuva Rathna though has disappeared, has attained immortality through his commitment to his successful career and social welfare activities. Baana Daariyalli Surya Jaari hoda…