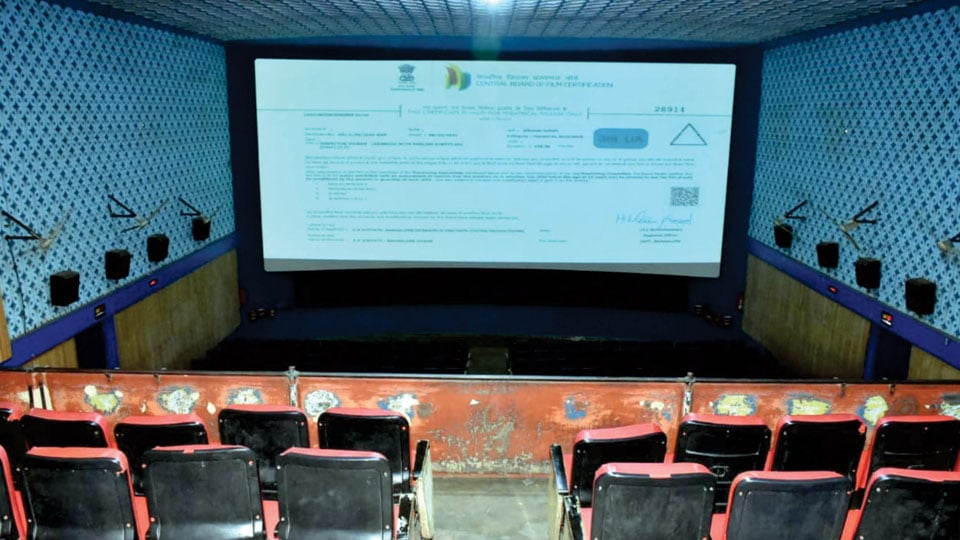 “Film  as  dream, film as music.  No art passes our conscience in the way film does and goes directly to our feelings, deep down into the dark rooms of our souls.”  —Ingmar Bergman, Acclaimed Swedish Director

About sixty years back, my father Ashwathanarayan started the very first movie theatre in his native place Chamarajanagar, in partnership with a reputed person, who was the main financier for building the same. Those were the decades, when movies were the only get away fantasy world for people from all economic strata.

In the late 1960s, as a 5th standard student, I used to watch my father’s busy schedules of travelling in a taxi or our Ambassador car, to Bangalore, then again reach Mysore in the early morning, leave almost immediately to Chamarajanagar, after refreshing in our home in Mysore, with a sugarless coffee and two slices of bread.

I always was curious to know “what are these big, circular hindalium boxes, which Appa is stressed out to carry to Chamarajanagar…?” When I ventured to ask him about the same, he had told me “These are boxes, containing the movie rolls ! I need to rush these to Nagara (Chamarajanagar), before 1 pm for the matinee show. Since the Bangalore-Chamarajanagar ‘Udaya Ranga Bus’ is not plying today, I am myself transporting these from Bangalore to Nagara!”

That was the commitment which my father had and in fact, those were his enormously struggling days, wherein a film exhibitor had to feel the audience’ pulse, before booking the movie for his theatre, by discussing the story-line of a movie and its box-office collection in one or two theatres in a city like Bangalore or Mysore (since  movies used to get released  a month  earlier in cities than in that time Taluks like Chamarajanagar).

On a couple of trips with him to Bangalore, along with my mother and my younger sister (when I was ten years of age and she, seven years), I would watch his cryptic knowledge about film stars from different languages, especially during a marathon discussion with a distributor centring around the movie “Pakheeza.” [Of course, my sister and myself used to be extremely happy getting the Cadbury’s chocolate bars from the distributor, once the movie was booked for the Chamarajanagar theatre, for an initial duration of four weeks, for which my father used to pay 30 percent of the movie price as advance either by cash or cheque!]

Though my father never used to watch any of the movies in full length, I vividly remember the occasion when he had taken us to the ‘Menaka’ theatre in Bangalore, which had screened the Kannada movie “Lagna Patrike” in which Dr. Rajkumar was the hero. Co-incidentally my mother’s relative Ambi mama was the Manager of Menaka Theatre, at that time.

My father had made us sit in the VIP box of the theatre and would himself go to Ambi mama’s office chamber, to discuss about the screening of the movie in Chamarajanagar ! (This movie ran ‘Houseful’ for more than 125 days in Chamarajanagar. The all-time hit song “Seenu Subbu, Subbu Seenu…” enacted by veterans Sharapanjara Shivaram and Chi. Udayashankar became a sing along song during get-togethers and marriage receptions, cutting across the age and generation barriers !).

In the Chamarajanagar theatre (which no longer exists in its original form and name), there also was a ‘VIP-box’ for guests to watch the movie. We as kids would prefer to sit there, since we could enjoy eating Nanjangud bale hannu and roasted kadlekais! sometimes clapping thunderously, sometimes with tears in our eyes, depending on the scene on the Screen!  (I remember watching the movie ‘Uyyale’ sitting in the VIP box along with Dr. Rajkumar’s younger sister Sharadamma and her husband Balakrishna, since the latter was working in a Bank in Chamarajanagar).

Whenever one of my Doddappa (father’s elder brother) used to visit us in Mysore, on his way from Bangalore to Chamarajanagar, my younger sister and myself would get into the Ambassador car with him and our father for just a day’s trip! Movie-watching was on top of the agenda and the main incentive.  On one such short visit, Doddappa watched the Kannada movie “Gange Gowri” with us.

We, as kids had had a hearty, uncontrolled laughter when Doddappa (Krishna Periyappa) stood up for more than 8-10 minutes with his folded hands in “Namaskara” position, as the movie stars Rajkumar as Shiva, Leelavathi as Gowri and Bharathi as Gange appeared together on the silver screen ! Such was the type of reverence “the make believe” screen attracted till the invasion of Cable TV channels.

The 1970s was also the decade when the audience (full of joy and gratitude for the balm that the movies had become) had started throwing currency coins on the single screen, that was showing the movie, also as a mark of affection to their hero or heroine!

READ ALSO  Book on Suresh Heblikar to be launched in Bengaluru

My elder sisters have told me that when I was of about two years of age, they had taken me to the Kannada movie “Ramanjaneya Yuddha.” In the beginning, I believe, I was cheerful, smiling and happily clapping and Lo !  the moment Hanuman (Actor Uday Kumar) addressed ‘Seetha’ as “Amma…” in the movie, I started crying aloud, non-stop by remembering my mother “Amma…Amma …!!”, much to the embarrassment of my two elder sisters, who had to walk out of the theatre (with the audience frowning and staring at them), as my sisters went on pacifying me “Hogona, hogona… Amma hatraane hogona … ( let’s go to our amma only).”

I also remember seeing “Mili” Hindi movie, “Apoorva Raagangal”  Tamil movie, “Chalisuva modaglu” Kannada movie with my mother. Since she was a cardiac patient, she was phobic about climbing-up to the Balcony, we both had watched the said movies in the Ground Floor of the theatres, like  Lido, Laxmi and  Sterling theatres  respectively, in Mysore.

My mental repository naughtily recalls how I would inform my childhood friend S. Sudha (who was pursuing M.A. in Sanskrit during the early 1980s) just a day before the movie-going programme, “Tomorrow I don’t have theory classes after the clinics, you can come to K.R. Hospital Scooter Stand by 10 am. We will go and watch Laxmi – Anant Nag starrer ‘Mududida Taavare Aralitu’ in Prabha Talkies!.” ‘Zoom’ we used to reach the movie theatre in just 2 minutes on my TVS Moped !

A visit to the single screen theatre and watching the movie with either the family members or friends used to be an affair to “bond with each other”, for unlike in the multiplexes where nowadays people tend to eat their snacks and brunch there only, in the 1980s and 1990s, after watching a movie, a visit to a nearby drive-in restaurants like Hotel Siddhartha  or Indra Vihar   to eat ‘dosas’ and ‘jamoons’, used to be another incentive!

In summation, though now there is scantiness of the ‘single silver screen’ theatres, can we hope to see the quaint passion repullulate, so that the vibgyorish emotions can be re-instilled in the often, utterly jaded lives of Homosapiens ? !