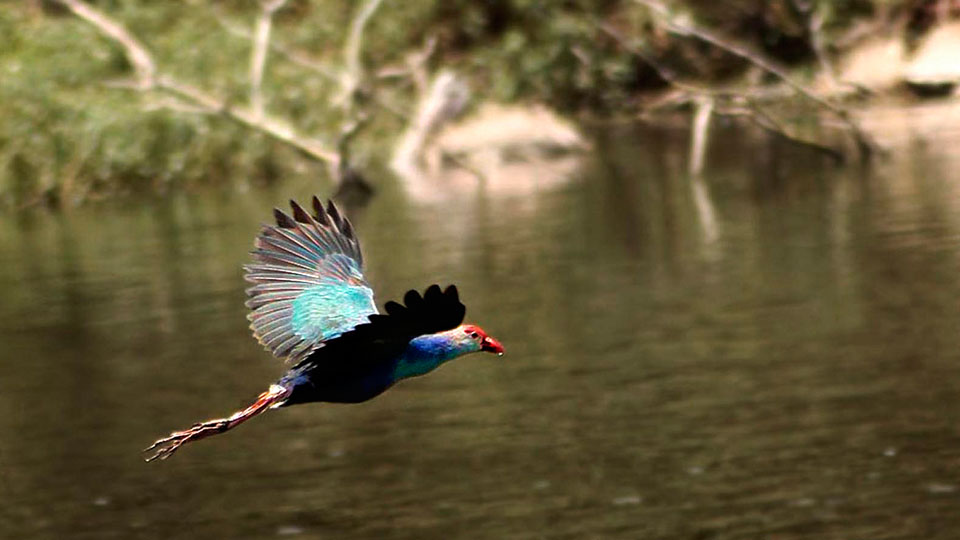 The Purple Swamp Hen is a large water hen with a distinctive heavy red bill and forehead shield. It has red eyes and a deep blue head and breast with black upper parts and wings. In bright sunlight the plumage shines with an intense blue sheen.

These birds use a variety of mating systems, ranging from monogamous mating to communal mating. A distinct characteristic of these birds are that male birds just meekly obey the commands of the dominant females when it comes to mating rights and building a family. Males are just slaves here. Read this Weekend Star Supplement to know more.

The Amazons of Bird Kingdom: Where mating rights of females matter and not the males

Edgar Rice Burroughs (Sept. 1, 1875 to March 19, 1950) was an American fiction writer best known for his celebrated and prolific output in the adventure and science-fiction genres, the most famous being the Fictional Character “Tarzan- The Ape Man”.

In one of his creations on the adventures of Tarzan, he mentions and writes the confrontation of Tarzan with a secretive and undiscovered “All Women Race”- The Amazons – Mythical Warrior Women. They would, when the need arises, capture men, enslaving them to fulfill their need to continue their race. The Women would fight fiercely with each other to have the privilege of mixing with the enslaved men and procreate.

A fascinating story, enjoyed by many and the heroism of Tarzan in getting all the slave men released.  This is fantasy to be read or narrated only in science fiction or mythical adventures. There can be no such happening in reality except may be in some species of animals where there are Amazon-like females and slaves like males. 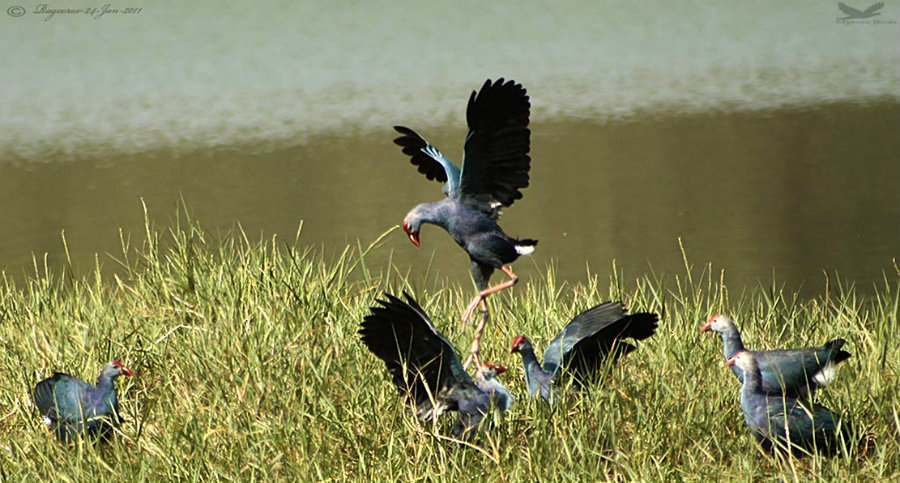 The final kick to defeat the contender and emerge alpha winner.

One such example that can be sighted and witnessed in our lakes — Hebbal Lake, Kukkarahalli Lake, Karanji Lake, Bogadi Lake, Lingambudhi Lake and Hinkal Lake — where Amazon-like females literally battle for mating rights with males, who have no say in the matter. A male has to meekly and blindly listen to the winning female. This is the social structure of a species of waterfowl – Purple Swamp Hens – the Amazons of Bird Kingdom.

The Purple Swamp Hens – Porphyrio porphyrio, also called Purple Gallinule in some other countries, resident dwellers of swamps and lakes, are domestic chicken-sized birds. As the name suggests, they are deep purple coloured with high glossy hues. The beak is red with a frontal disc also in bright red, giving them an attractive appearance. Long reddish legs help them in wading through the water and they are expert swimmers too. 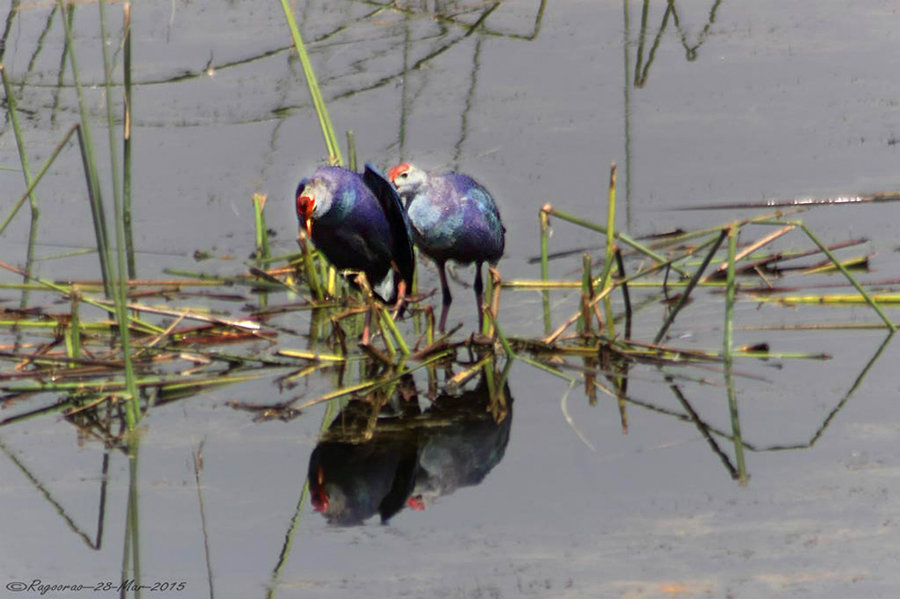 The winner female offering herself to the selected male.

Though weak in flying, they can fly with amazing speed for short distances. (Recently these species inhabiting our region, have been reclassified and given a sub-species status and called as Grey-headed Swamp Hens – Porphyrio Poliocephalus. Purple Swamp Hens are frequently spotted on the roadside and often crossing the road. As they like to be near water, the water in roadside ditches attracts them. Purple Swamp Hens are in fact highly adaptable to changing environments – they can run, swim, fly and hide from predators.

They are omnivores, eating a wide variety of both plants and small animals including seeds, insects, frogs and aquatic vegetation. They will also eat eggs and small mammals and have the strength to pull up reeds and feed on the soft stems. 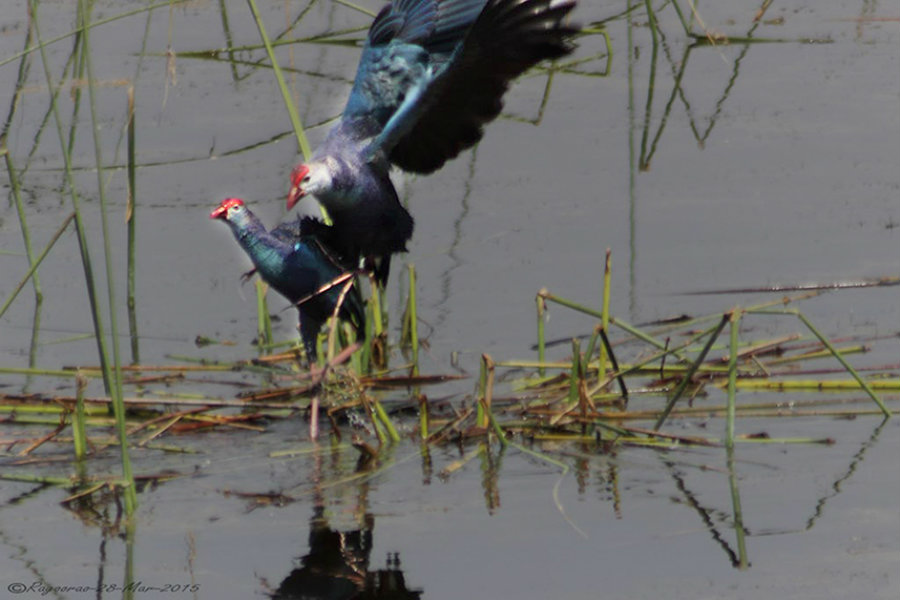 The selected male mates with the winning female.

Frequently sighted foraging in the shoreline of the lake or foraging in the cleared paths beside lakes, these birds are wary but curious about approaching anything or anyone cautiously and inspecting. Once a person is familiar with the birds, they shed their fear and just go about their lives ignoring or accepting the person. Their mainstay of food being aquatic plant shoots and occasionally crustaceans, they have very dexterous feet, with long toes. Their feeding on the water plant shoots are a sight to watch. They hold the shoot with one foot, like Primates holding something in their palms and eat.

Somewhat akin to parrots holding a chilly or a fruit with one foot and eating. 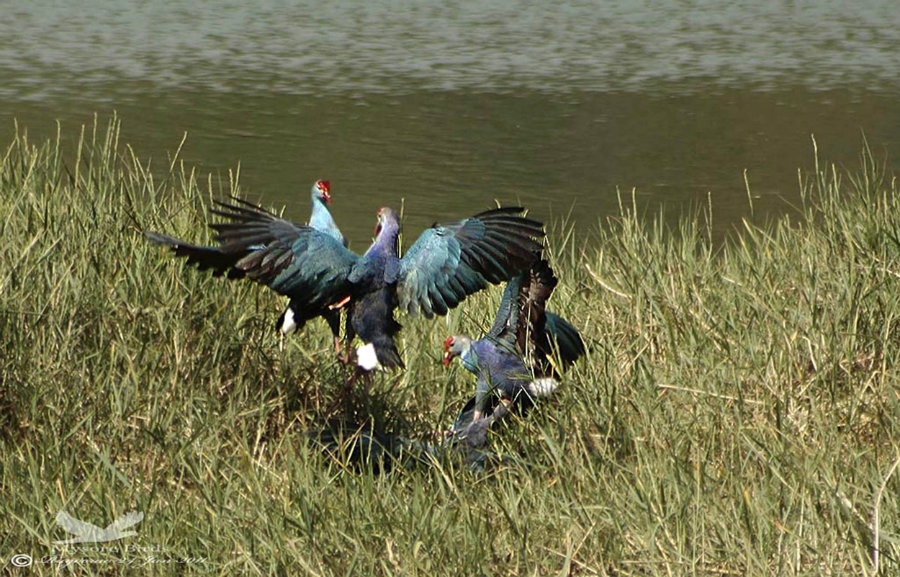 Another bout for second-rung females.

Like all life, the Swamp Hens also have to procreate. And this is where they show their Amazon-like behaviour. Living in small groups and flocks, and sometimes solitary also, the Swamp Hens have their breeding season in the post monsoon times of plenty.  When food is abundant, the water levels in swamps are high and the lush reed beds growth is good, the Swamp hens are triggered into breeding modes.

During breeding season, their purple color grows more intense due to hormonal changes. While the females start getting more aggressive, the males don their best glossy feathers. Bands of females are formed and they look around for males that are willing. When one or occasionally two or more males are sighted, the female bands confront any other rival females in the vicinity.

The selected male mates with the winning female.

After much of sizing up the opponents, very much like our karate or taekwondo contestants and a few mock attacks, the real battle starts.  The highly-hormone-charged females take a direct head-on attack with their rivals, cheered and supported by their respective sisters-in-flock, with loud calls and eager to join hands, rather legs.

Exited and fully charged, the duel starts, very much like our kick-boxing combats.  The battle goes on with lethal kicks and murderous rage. The atmosphere is thick with fury and feathers flying around. The dominant Amazon female is so aggressive that she leaps into the air and tramples the contender with powerful legs. The battle goes on until one team of contenders scamper away from the battle ground. The meek males watch this battle mutely standing at the battle ground. They are unable or not evolutionarily programmed to have any say in the matter. In the end they happily submit themselves into the winning Amazon females. The Amazon team leader moves to a clearing, meekly followed by the male and when she consents with her crouching posture, he discharges his nature-ordained duty of procreation. The females take their turn in getting the services of males by hierarchy. The Swamp Hens, once the battling and mating frenzy is over, are all in parental Mode.

Next, the nest building starts. A nest is a collection of dry aquatic plants, all laid out like a platform deep inside the reed-beds and the females lay six to twelve pale yellowish eggs blotched with dark brown marks. Both males and females build nests and many females lay eggs in any nest communally. The warring birds are all friends now. 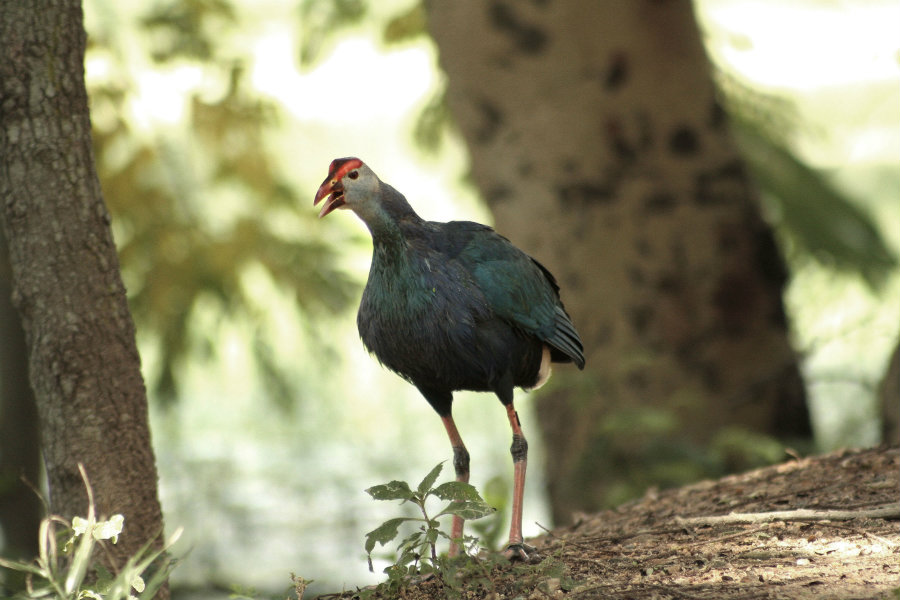 The winning female calls loudly to challenge any other contenders.

The incubation of the eggs for around 23 to 27 days is done by birds of both sexes like a single joint family. Whoever is free takes on the work and lets the other go for feeding or defending the nests from predators. The chicks are also fed and cared for in the community. It’s a co-operative effort to raise a clutch. The chicks grow up fast under the care of the entire extended family and get ready to do their roles – either an Amazon female or a meek male or a devoted and dutiful joint family member.

With all this drama of life, happening exactly like in the mythical creations of many writers, in our own backyard lakes of Mysuru, a thing we should all cherish and protect the stages on which the drama of life is played, as nature- ordained. That is the beauty of our lakes. Lakes were created hundreds of years back. We can either destroy them or pass them on to the next generation in a healthy and vibrant form. The choice is ours. 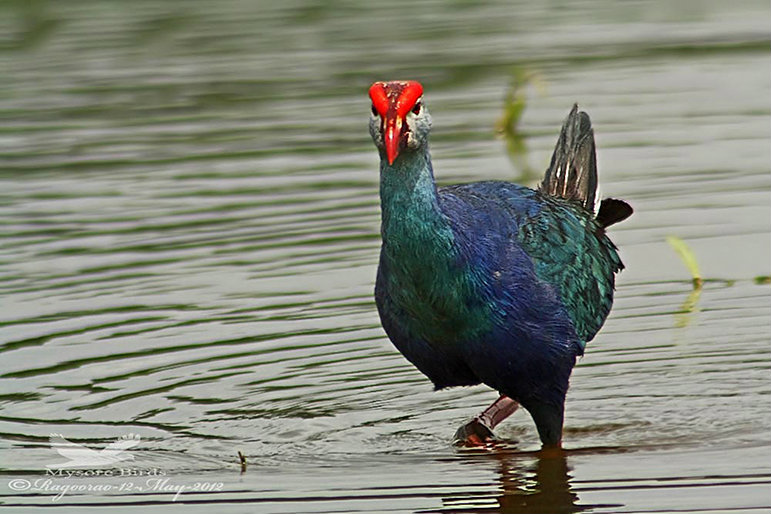 The Alpha female after being victorious selects a nesting site in the reed bed. 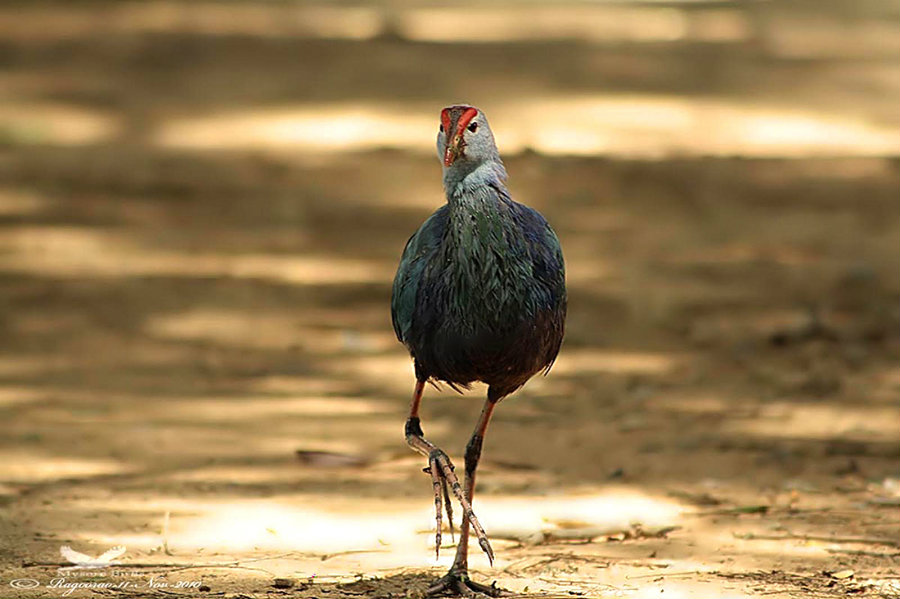 After the breeding season is over, the tired males go their way and start losing their sheen and deep colours. 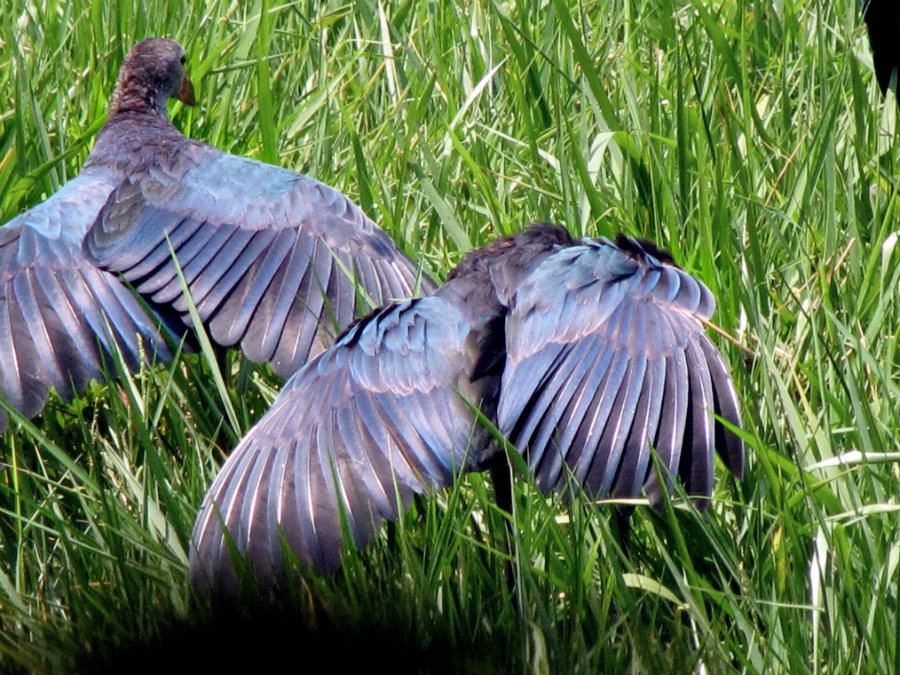 In the prime of breeding colours, the Swamp Hen displays its iridescent colours to attract males. 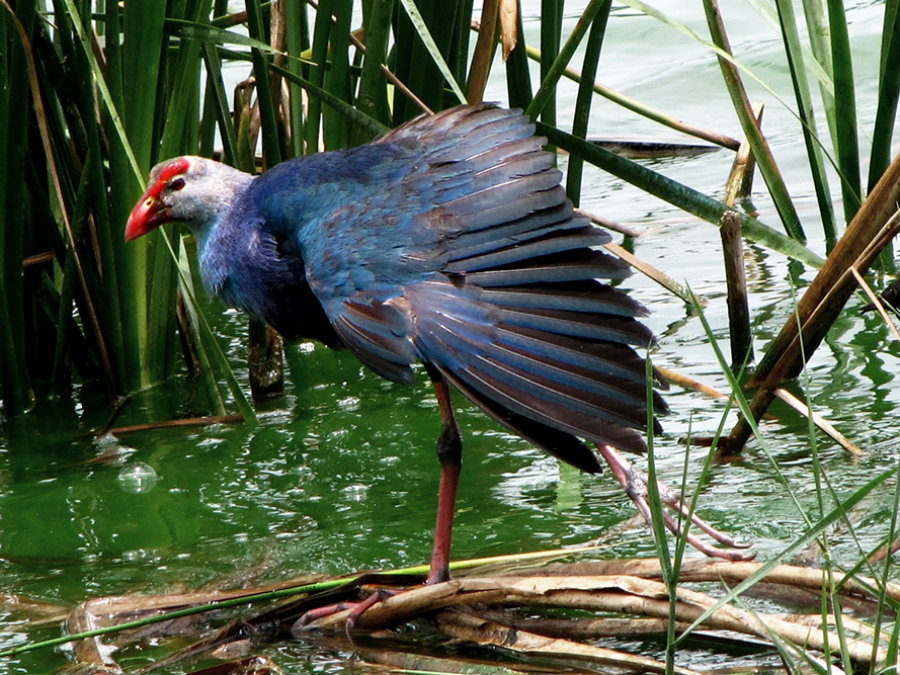 One of the nesting and brooding females, defending her territory from intruders by ‘Drooping Wing’ display as a sign of threat.