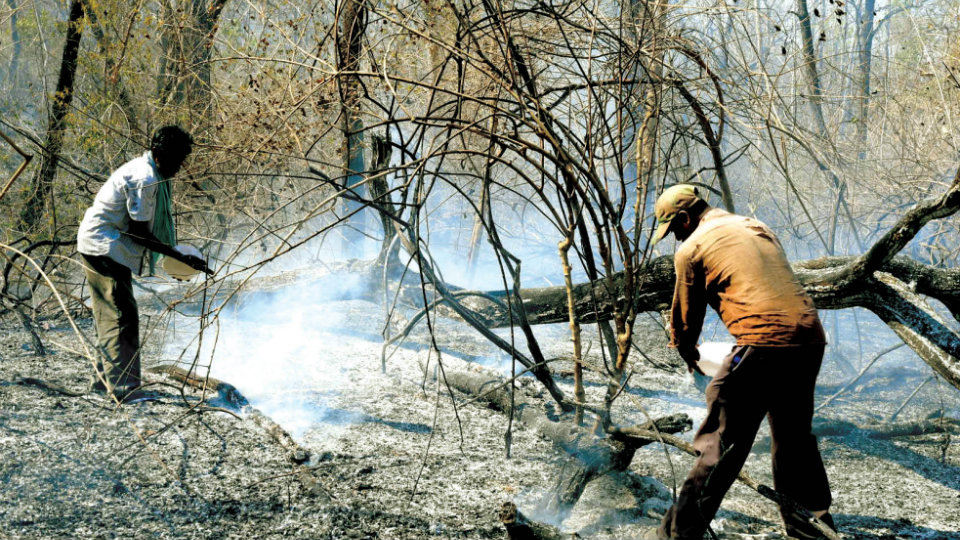 Bandipur:  The raging forest fire which destroyed thousands of acres of forest land in Bandipur Reserve Forest and surrounding forest areas including Gopalaswamy Hill forest range has been completely doused. Thanks to the Indian Air Force (IAF), which had sent two choppers to help the Forest staff in dousing the raging fire.

This morning, the forest staff began patrolling all the ranges along with volunteers to extinguishing live embers to ensure that it would not trigger fire again. As a lot of trash was found inside the forest, the process of clearing them has also begun.

Meanwhile, 30 staff members, each from Cauvery Wildlife and M.M. Hills Wildlife Divisions were sent back as the Jathra Mahotsava at Male Mahadeshwara Temple in M.M. Hills is scheduled on Shivaratri day.

Volunteers were also summoned back from the forest interiors and forest guards sent in their place.It is learnt that one chopper has been sent back to Bengaluru while one is stationed at Mandakalli Airport as a standby.

Meanwhile, Chamarajanagar District Minister C. Puttarangashetty, who was nowhere to be seen or heard when the forest was in flames for almost a week, visited Bandipur yesterday only to be taken to task by the irate villagers.

The Minister who visited the affected places collected details of preventive measures and operations undertaken by the forest officials.

Conservator of Forests Ambadi Madhav and other forest officials accompanied the Minister.